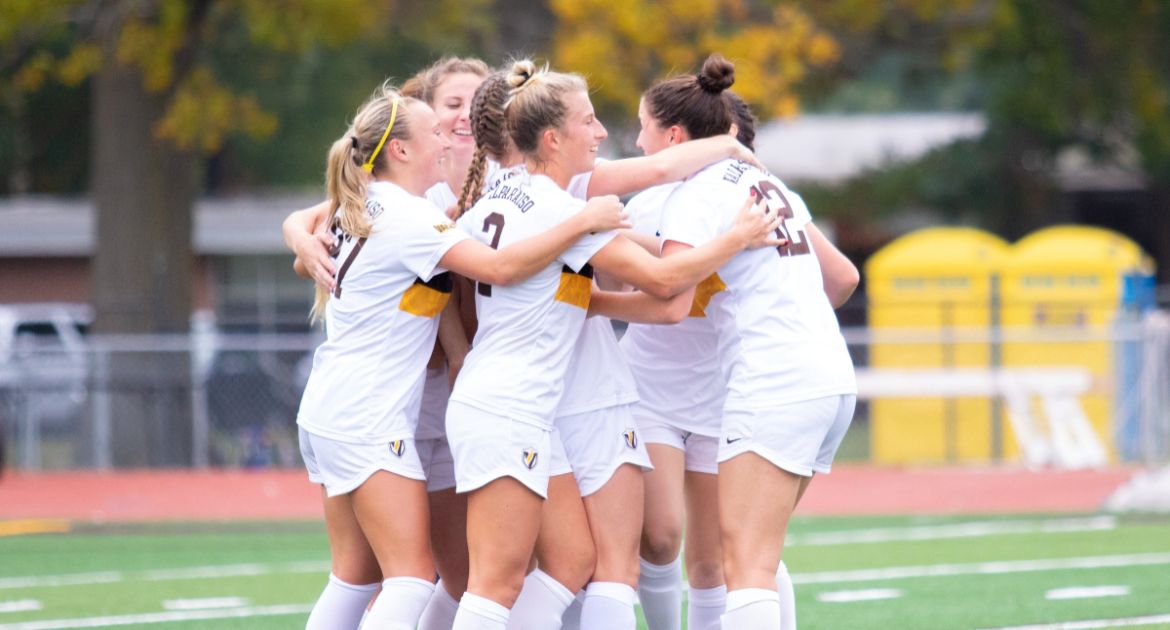 Next Up in Valpo Soccer: The Valpo women’s soccer team opens up the 2019 Missouri Valley Conference Tournament as the fifth seed and begins action with a first-round matchup at fourth-seeded Drake Monday night. Valpo enters the tournament having won two of its last three matches.

Previously: Valpo closed out the regular season in style Friday afternoon on Brown Field, scoring twice less than a half-hour into the match and adding another insurance tally in the second half to complete a 3-0 triumph over UNI. Lauren Torhorst scored a pair of goals in the match, while Cierra Welch assisted on each of the first two goals.

Looking Ahead: With a win on Monday, Valpo would advance to the tournament semifinals and would take on top-seeded Loyola Friday evening at 6 p.m. in Springfield, Mo.

Following the Brown and Gold: The tournament opener against Drake will be broadcast live on ESPN+. Live stats for the matchup with the Bulldogs will also be available via ValpoAthletics.com.

Head Coach John Marovich: In his 12th season at the helm of the Brown and Gold, John Marovich holds a 98-93-31 (.511) record both overall and at Valpo as a head coach. The 2014 Horizon League Coach of the Year, Marovich holds Valpo’s all-time records for both victories and winning percentage.

Series Notes: Drake holds a 5-0-1 advantage in the all-time series over Valpo and has wins in all three matchups since the Brown and Gold joined the MVC. Drake earned a 4-2 win in Des Moines in 2017, scored a golden goal to hand Valpo a 1-0 defeat on Brown Field last season, and then blanked Valpo just over a week ago, 3-0.

Scouting the Opposition: Drake enters tournament play with a 7-9-1 overall record this year and finished the regular season 4-3-0 in MVC play to earn the fourth seed. After going on a four-match winning streak within the conference, the Bulldogs dropped their regular season finale against Illinois State, 1-0. Olivia Bruce has a team-best three goals this year, but Drake has scored just 13 total goals. Kelsie Stone has played the vast majority of minutes in goal.

Tournament History: This marks Valpo’s fifth appearance in the MVC Tournament split over its two tenures as a conference member. Valpo made the tournament in its first year as a full member in 2017, falling at Loyola in first-round action by a 2-1 final, but missed the postseason event last year. Previously, Valpo competed in the tournament as an affiliate conference member in 1996, 1997 and 1998, dropping its first match all three times. Valpo is in search of its first victory in a league tournament match since it won the 2014 Horizon League Tournament with victories over Green Bay and Detroit.

Valpo Outperforms Preseason Poll: With its win over UNI in the regular season finale, Valpo closed out the season alone in fifth place in the MVC standings. Valpo out-performed its preseason projection by two spots, as the preseason polling had Valpo finishing seventh. In its first three seasons as a full-fledged member of The Valley, Valpo has not finished worse than its preseason projection, as both the 2017 (fifth) and 2018 (sixth) sides matched their respective preseason picks.

What’s Back and What’s New: Valpo returned 13 letterwinners from last year’s squad to the 2019 team, including five starters. The program welcomed nine newcomers to the fold this season - eight true freshmen and one transfer.

Holding a Key Clean Sheet: Valpo picked a good time for its biggest shutout win of the year, downing UNI in the regular season finale by a 3-0 finale to clinch its MVC Tournament berth. It is Valpo’s largest shutout win in MVC play since joining the Valley, and is the largest margin in a clean sheet for Valpo since posting a 6-0 win at Youngstown State in September 2015.

Flipping the Result: Valpo’s last two matches of the year were mirror images in terms of result, as it fell at Drake 3-0 before taking down UNI by the same score. It was the first time Valpo lost by three or more goals and turned around to win by at least three goals in its next match since the end of the regular season just last year, when the Crusaders lost 3-0 at UNI before closing the year with a 5-1 win over Indiana State. Only once in program history has Valpo been shut out 3-0 or worse and responded with a shutout win of 3-0 or better, and you have to go all the way back to the program’s second season: 1994, when it fell 3-0 at Marquette and won its next match 3-0 over UW-Whitewater.

The Youth in the Side: Valpo has featured an extremely young side through the entirety of this season, starting with the season opener, where the Brown and Gold featured five freshmen in the starting XI. Five freshmen starters marked the most for a Valpo women’s soccer team in a season opener since at least 1998. Valpo’s lineup in the two wins in the last three matches has been littered with underclassmen. Against both Evansville and UNI, Valpo started six freshmen, with two sophomores in the starting lineup as well against Evansville and one against UNI. In the win over the Purple Aces, all four players who appeared off the bench were underclassmen, while two of the three reserves against UNI were underclassmen.

Torhorst With the Brace: Junior Lauren Torhorst has been a sniper in front of net during MVC play, and was up to the task in the regular season finale, picking up two goals - including the match-winner to open the scoring - to help Valpo secure the tournament berth. After not attempting a shot in nine non-conference fixtures, Torhorst scored five goals in MVC play on just 12 shots, seven of which were on goal. The junior finished second in MVC-only play in goals and points, behind only Illinois State’s Kate Del Fava, and joined Del Fava as the only MVC players with multiple match-winning goals in conference action, as Torhorst also secured Valpo’s 1-0 win over Evansville with a goal.

Multiple Multi-Goal Games: Torhorst’s two-goal match against UNI was her second multi-goal effort of the year, as she earlier posted a brace in Valpo’s match at Indiana State. It marks the first time a Valpo player had two multi-goal games in conference regular season play since 2002, when Lori Moore netted a pair against both IUPUI and Oakland - Emily King scored two apiece versus Southern Utah and Oakland in 2005, but both of those contests were in the Mid-Con Tournament. This is now the fourth straight season that a Valpo player has had two multi-goal games in the same year, as Cory Griffith accomplished the feat in each of the last three years (2016-2018) - prior to Griffith, the last Valpo player with two two-goal games in the same season was Sarah Jewell in 2006.

Cierra Helps Out: Freshman Cierra Welch returned to the Valpo lineup in the Evansville match after missing nearly a month, and her return has been impactful. Welch assisted on the lone goal in the 1-0 win over the Purple Aces, and then last time out helped Valpo secure a tournament berth by assisting on each of the first two goals in the 3-0 victory over UNI. With three helpers in MVC play, Welch finished the regular season tied for second in the conference in MVC-only action.

Henkel Holds the Shutout: While freshman Georgia Henkel had to make just two saves to secure the clean sheet in the regular season finale, one of those two stops was tremendous - a leaping effort to push a high shot over the crossbar early in the match when the scoreline was just 1-0. Henkel has posted shutouts in two of the last three matches after not appearing in goal for nearly a month, and enters the MVC Tournament with a 1.56 GAA and a .707 save percentage. She has surrendered one goal or fewer in six of her 11 starts.

Going the Distance: Norfolk has not come off the field yet this year for Valpo, playing all 1,569 minutes over the 17 matches. She is one of five players who has gone all 90+ minutes at least 10 times: Metzger has played the entire match 15 times, including each of the last nine; senior Ali Quillen has gone the distance 13 times; freshman Natalie Graf 12 times; and Broecker 11 times.