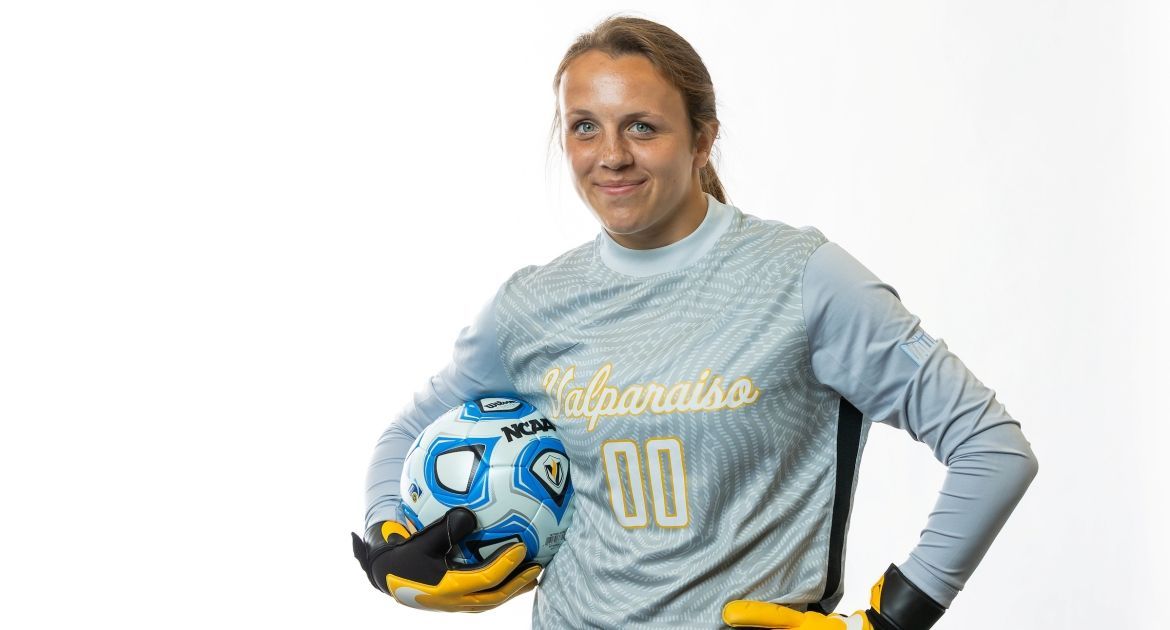 Next Up in Valpo Soccer: With seven wins in a row under its belt and a spot in the top-four in the MVC standings secured, the Valpo soccer team sets its sight on the next goal when it steps on Brown Field Sunday to take on UNI. The Beacons will earn a first-round bye and clinch a top-two finish in the Valley with a win or a draw against the Panthers.

Previously: It was a memorable Senior Night at Brown Field last Saturday, with the senior class very instrumental in a 5-0 victory over Cornell College. Valpo then returned to MVC play with a 1-0 victory at Drake on Wednesday featuring an Olimpico from Kelsie James.

Looking Ahead: The Beacons close out the home portion of their regular season schedule next Saturday night as they host Evansville.

Following the Beacons: Sunday’s match will be broadcast live on ESPN+ and will have live stats available via ValpoAthletics.com. All remaining matches will be carried live on The Valley on ESPN.

Head Coach John Marovich: In his 14th season at the helm of the Valpo program, John Marovich holds a 112-103-37 (.518) record both overall and at Valpo as a head coach. The 2014 Horizon League Coach of the Year, Marovich holds Valpo’s all-time records for both victories and winning percentage.

Series Notes: The series between Valpo and UNI sits even at 4-4-1 entering Sunday’s matchup. The two sides met twice this past spring, playing to a 0-0 draw in a neutral site, non-conference meeting in February before the Panthers claimed a 1-0 victory in Waterloo in the match which counted towards the conference standings in March. In the last meeting on Brown Field, Valpo earned a 3-0 victory in the 2019 regular season finale — a matchup which was delayed a day due to snow.

Scouting the Opposition: UNI enters Sunday’s fixture at 5-8-3 overall this season and with a 2-3-0 record to date in MVC play, most recently picking up a 2-0 victory at Missouri State on Wednesday. The Panthers also own a win over Illinois State in conference, while they have dropped points to Loyola, Indiana State and Evansville. 10 different scorers have accounted for UNI’s 19 goals, led by six from Lauren Heinsch, who has also picked up a pair of assists. Three different keepers have seen significant time in goal, led by Caitlin Richards, who has played better than half the minutes and owns a 1.91 GAA. Chloe Russo earned the start in goal last time out, however, and racked up five saves in the clean sheet against MSU.

WWWWWWW: The win at Drake was the Beacons’ seventh victory in a row, just the fourth time in program history Valpo has won seven or more consecutive matches. Besides the record 12-match winning streak in 2014, the 2006 (eight) and 2009 (seven) sides each had a winning streak of at least this length.

Looking Like 2014: The team’s current form is looking a lot like the program’s 2014 campaign, when it posted a perfect 8-0-0 mark in Horizon League play. Valpo has won seven matches in a row, its longest winning streak since winning 12 in a row in 2014. The Beacons have won five consecutive road matches, their longest winning streak in true road matches since winning seven straight as the visitor in 2014. Dating back to last season, the program has won seven straight regular season MVC matches, its longest winning streak in league regular season play since the 2014 side won all eight Horizon League matches. Even the number of players who have scored match-winners this year – seven - is the most since the 2014 squad had seven different players tally game-winning goals.

Glance at the Table: Valpo’s win over Drake moved the team to 15 points through five MVC matches, securing a top-four finish in the final standings, as of the teams below the Beacons right now, only UNI and Indiana State could potentially finish with 15 or more points. A win or a draw guarantees Valpo a top-two spot in the final standings and the accompanying bye to the tournament semifinals, as only Indiana State — who Valpo has the tiebreaker over — could even reach 16 points. While Loyola is currently one point ahead of Valpo, the Beacons have a game in hand over the Ramblers heading into the stretch run.

Getting Defensive: Valpo’s current seven-match winning streak has included six clean sheets, with only Missouri State putting a goal away against the Beacons during this stretch. The first four wins in the winning streak all came via shutout — prior to this year, you have to go back to 2009 to find the last time Valpo won four in a row, all in shutout fashion. Valpo put together a streak of 419 consecutive minutes of shutout soccer between Sept. 10 and Oct. 3. Thanks to their defense during the winning streak, the Beacons have not trailed in a match since their Sept. 10 loss to Western Illinois.

Finally Beating the Bulldogs: In the ninth meeting all-time between the two sides, Valpo finally earned its first win over Drake on Wednesday when it went to Des Moines and came away 1-0 victors. With the victory over the Bulldogs, Valpo has now beaten each of the other eight MVC programs at least once since joining the Valley.

Third Time’s the Charm?: Valpo and UNI will be meeting for the third time this calendar year on Sunday, with the Beacons in search of their first win over the Panthers in 2021. The two teams drew 0-0 in a non-conference matchup in February, followed by a 1-0 UNI win in the conference meeting in March. In fact, Valpo will be facing each of its final three regular season opponents — UNI, Evansville and Loyola — for the third time this calendar year after meeting all three twice during the spring campaign. In those six matches, Valpo was winless, posting a 0-3-3 record.

A Classic Goal: Sophomore forward Kelsie James has had some memorable strikes in her two seasons with the Valpo program, but when you consider quality and importance, perhaps none tops the Olimpico she scored directly from a corner last time out at Drake in the 72nd minute. The goal proved to be the match-winner in Valpo’s 1-0 victory, James’ second match-winner of the season. She leads all MVC players with seven goals on the season and is tied for top honors with 17 points, both marks on the verge of cracking Valpo’s single-season top-10 charts.

Nikki Notches Another Shutout: Sophomore goalkeeper Nikki Coryell posted another clean sheet in Wednesday’s win at Drake, making five saves to preserve the shutout — her fourth in Valpo’s five MVC wins. Coryell now has 11 career shutouts, already fifth-most in program history. She has posted a 0.20 GAA and a .963 save percentage in Valley action, surrendering just a lone goal to Missouri State over Valpo’s five conference fixtures, while her 0.91 GAA and .853 save percentage overall this year both rank second in the MVC. Her numbers in MVC play are even more spectacular when you consider that, of the 454:35 played in conference so far, Valpo has been tied for 334:59 (73.7% of the minutes) and owned a mere one-goal edge for 92:31 (20.4% of the minutes).

Another Week, Another Honor: While it was the seniors who stood out on their Senior Night, it was a freshman who went on to pick up a weekly award from the MVC office. Addy Joiner was named the MVC Freshman of the Week this past Monday after tallying a pair of assists in the win over Cornell College, the first two assists of her career. Joiner, who now has six points on the season, became the seventh different Beacon to earn weekly honors from the MVC this season — Kelsie James and Lindsey DuSatko have been named Player of the Week, Nicole Norfolk and Nikki Coryell have earned Defensive Player of the Week honors, while Joiner joins Dana Fish and Abby White as Freshman of the Week honorees.

A Debut to Remember: Freshman Claire Bonnici will always remember her collegiate debut. Coming onto the pitch to start the second half last Saturday against Cornell College, Bonnici scored less than 19 minutes later, as she was on the receiving end of a free kick to one-time it home from the center of the box for her debut goal.

Trio of Firsts: The trio of Gaffney, Metzger and Bonnici all scored their first collegiate goal in the Cornell College win, the second time this season Valpo has had three first-time goal scorers in the same match. The Sept. 12 win over Chicago State featured the first collegiate goals for Cassidy Eckstein, Dana Fish and Cierra Welch. Prior to this season, Valpo had never had three players net their respective first career goals in the same match.

Always in the XI: Three players have started each of the season’s first 14 matches: Kiley Dugan, Nicole Norfolk and Abby White. In their third season in the Valpo uniform, Dugan and Norfolk have both started all 46 matches since stepping on campus.