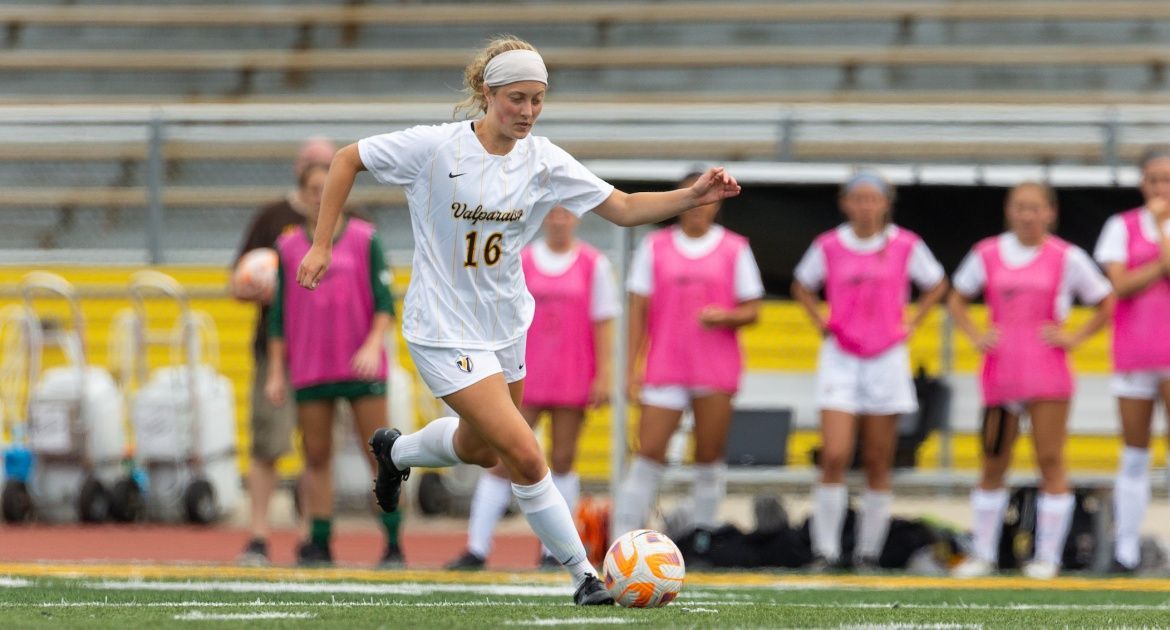 Next Up in Valpo Soccer: Halfway through the non-conference slate, the Valpo soccer team makes a stop back at Brown Field for a home match Friday evening against Chicago State before a quick road trip to Muncie for a Sunday afternoon showdown against Ball State.

Previously: The Beacons posted a 0-1-1 record on their Colorado road trip last weekend, falling 3-0 at #25 Colorado before drawing 1-1 with Northern Colorado thanks to a goal from Dana Fish.

Looking Ahead: The non-conference schedule comes to an end next weekend with a pair of matches on Brown Field, as Valpo welcomes Purdue Fort Wayne on Friday night and Bowling Green on Sunday afternoon. The latter match will serve as the program’s Senior Day match.

Following the Beacons: The Chicago State match will be broadcast live on ESPN3. All nine of Valpo’s home matches are slated for broadcast on The Valley on ESPN (ESPN+ or ESPN3), while select road matches will be broadcast as well.

Head Coach John Marovich: In his 15th season at the helm of the Valpo program, John Marovich holds a 114-106-40 (.515) record both overall and at Valpo as a head coach. The 2014 Horizon League Coach of the Year, Marovich holds Valpo’s all-time records for both victories and winning percentage.

Series Notes: Chicago State - Valpo has won all three meetings in the series history against the Cougars. Last season, Valpo claimed a 3-0 win in Bridgeview, Ill., as Cassidy Eckstein, Dana Fish and Cierra Welch found the back of the net and Georgia Henkel posted a clean sheet.

Ball State - Valpo owns a 4-2-0 advantage all-time over the Cardinals, but it was BSU which came out victors at Brown Field last season in the first meeting since 2009, 3-1. The Cardinals took advantage of a pair of penalty kicks in that fixture. Kelsie James was responsible for the Beacons’ goal.

Scouting the Opposition: Chicago State - The Cougars enter Friday’s match at 0-4-0 on the season, most recently falling in a neutral-site match on Monday to North Dakota State, 4-1. CSU interim head coach Aulani Fernandez spent this past spring on staff at Valpo as a volunteer assistant.

Ball State - The Cardinals enter this week at 0-2-2, with a pair of scoreless draws against Queens and Indiana on their resume. Ball State was picked to finish in a tie for seventh place in the Mid-American Conference preseason poll.

Finding the Scoresheet Again: Sophomore Dana Fish tied for second on the team as a rookie last season with a trio of goals over 12 appearances as a reserve, and picked up right where she left off this past Sunday in her second match off the bench this season. Fish entered the match at Northern Colorado in the 28th minute and headed home a corner kick from Allie Anderson 13 minutes later. Last year, Fish’s first goal started a stretch where she picked up three goals and an assist over a four-match span. Fish’s four career goals have come in just 374 total minutes of action, as she averages a goal every 93.5 minutes.

New Season, Same Weekly Honors: It’s become a habit for Valpo to pick up weekly awards from the MVC over the last few seasons, and that continued after opening weekend as goalkeeper Nikki Coryell was named the MVC Defensive Player of the Week after posting a pair of clean sheets. Coryell, whose four saves included a diving effort in the final seconds to preserve the 0-0 draw at EIU Aug. 18, is now tied for fourth in program history with 14 career shutouts and is just one clean sheet away from becoming the 18th player in MVC history with 15 or more clean sheets.

Coryell has now been named MVC Defensive Player of the Week five times, tying her with Kelsie James (two Offensive, three Freshman) for the second-most prolific weekly award winner in program history, trailing only Lori Moore (1999-2002), who was a six-time Mid-Continent Conference Player of the Week. Valpo has had at least one MVC weekly award winner in seven of the last nine weeks of regular season play dating back to last year and has 16 weekly award recipients since the start of the spring 2021 campaign.

The First Time: Freshman Molly O’Rear was the lone Beacon to make her debut in a Valpo uniform in the season opener at EIU, as she started and played all 90 minutes. Against YSU, sophomore Sam Gountounas made her first career start, while freshman Sarah Epstein came off the bench for her collegiate debut and transfer Andrea Garcia saw her first regular season action at Valpo. Last weekend, sophomore Emma Morrison made the first start of her collegiate career at Colorado.

Always in the XI: Three players started all 18 matches for Valpo a season ago: Kiley Dugan, Nicole Norfolk and Abby White. All three have started each of this season’s first four matches as well. In their fourth season in the Valpo uniform, Dugan and Norfolk have both started all 54 matches since stepping on campus.