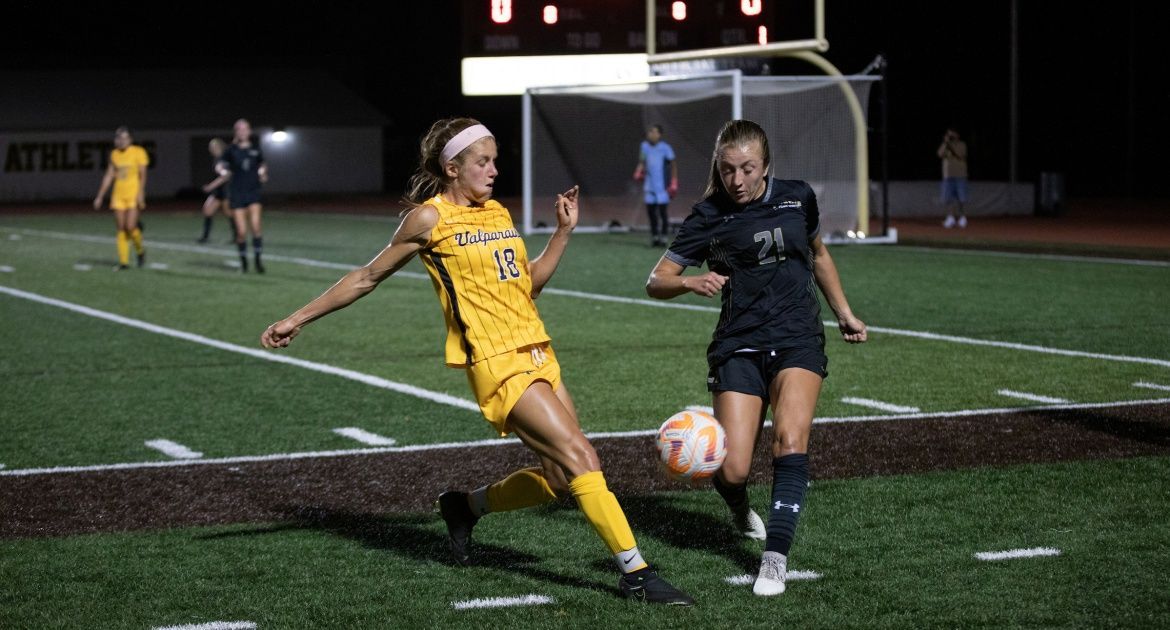 Next Up in Valpo Soccer: The Valpo soccer team looks to bounce back from its first defeat in conference play as it faces a pair of MVC fixtures this week. The Beacons play a second straight match away from home on Thursday evening as they head to Illinois State before returning to Brown Field on Sunday to take on Evansville.

Previously: Valpo dropped its lone match last week, falling at Missouri State by a 1-0 final in a battle of the two programs atop the MVC standings.

Looking Ahead: Valpo’s final two road matches of the regular season are on tap next week, as the Beacons face a pair of conference newcomers in a road swing to Belmont (Oct. 13) and Murray State (Oct. 16).

Head Coach John Marovich: In his 15th season at the helm of the Valpo program, John Marovich holds a 117-111-40 (.511) record both overall and at Valpo as a head coach. The 2014 Horizon League Coach of the Year, Marovich holds Valpo’s all-time records for both victories and winning percentage.

Series Notes: Illinois State - Valpo is just 3-7-0 in program history against the Redbirds, but all three of the program’s victories in the series have come since joining the MVC (3-2-0). One of those three wins came in last season’s matchup, a 1-0 win on Brown Field on Sept. 17. The win in last year’s MVC opener came courtesy of a goal in the 83rd minute from Dana Fish, while Nikki Coryell made seven saves to earn the shutout.

Evansville - One of the most common opponents in program history, Valpo is just 4-11-4 all-time against the Purple Aces. It has been a more even series since Valpo joined the Valley, however, with Evansville holding a slight 3-2-2 edge. The Beacons took down the Purple Aces, 2-1, in the penultimate match of the regular season last year behind a brace from Kelsie James, but Evansville got revenge with a 2-1 win in extra time in the semifinals of the MVC Tournament.

Scouting the Opposition: Illinois State - The Redbirds enter Thursday’s match still in search of their first points and first goal within MVC play, as they sit at 2-11-0 overall and 0-5-0 in Valley action. Last week, ISU lost 2-0 at Drake and 1-0 to Belmont. Overall this season, Allison Baker leads the team with seven points (3g, 1a).

Evansville - The Purple Aces, who play at UIC on Thursday before Sunday’s matchup, enter the week with a 1-6-4 overall record and an 0-3-2 mark in MVC play. Evansville drew 2-2 with UNI last week before falling 2-1 to Southern Illinois. Emily Ormson has scored a team-high four goals on the season and leads all D-I players in shot accuracy (% of shot attempts on goal).

Streak Comes to an End: Valpo’s three-match winning streak to open MVC play came to an end last time out with its 1-0 defeat at the hands of Missouri State. It was the program’s second winning streak of three or more matches in conference play since joining the Valley, as last year’s side won five straight MVC fixtures.

A Great Start: Valpo earned all nine points with three victories in its first three MVC fixtures, something which has been a good omen in the past. This year’s side is the seventh in program history to start conference play at least 3-0-0, as Valpo did so four times in the Mid-Continent Conference, once in the Horizon League and last season in the Valley. All six previous sides to start with at least three straight wins finished no worse than second in the final conference standings, including three conference regular season titles. Notably, however, none of those six seasons contained more than eight conference matches - this season, Valpo will play 10 conference matches.

One Side of the Scoreboard: If there’s been one constant over the last month of Valpo soccer, it’s that only one side of the scoreboard has had to be used. Each of the Beacons’ last seven matches have resulted in a clean sheet one way or the other - three in favor of Valpo, four in favor of the opposition. You have to go back to the 2-1 final against Chicago State Sept. 2 to find the last time both Valpo and its opponent scored in the same match.

Winning by Multiple Goals: Valpo followed up the four-goal triumph over UIC with a 2-0 win Sept. 25 over Drake, as Joiner and Natalie Graf struck for goals. It was the first time Valpo has won consecutive matches in conference play by multiple goals since September 2015, when it earned a 6-0 win at Youngstown State and a 3-1 win versus UIC.

Back to Back: For the second time in her career, sophomore Addy Joiner scored in consecutive matches for the Beacons. She was responsible for the first insurance tally in the 4-0 win over UIC Sept. 22 before connecting on the eventual match-winner late in the first half against Drake Sept. 25 - her second career match-winning goal. For her efforts, Joiner was named the MVC Offensive Player of the Week Sept. 26.

Keeping Clean Sheets: Valpo shut out the opposition in each of its first three Valley matches - last year’s team did so as well, but that’s the only other time in program history the Beacons have kept clean sheets through their first three conference games. Nikki Coryell made 10 saves to earn those three shutouts, giving her five total on the season and 17 for her career, tying her for 15th in MVC history. Valpo has now posted shutouts in nine of its last 13 MVC regular season matches.

A Historic Honor: Coryell was tabbed MVC Goalkeeper of the Week Sept. 26 for her pair of shutouts against UIC and Drake, her second weekly award of the season from the conference office and the sixth of her career. With six weekly awards, Coryell is now tied with Lori Moore (six-time Mid-Continent Conference Player of the Week) as the most prolific weekly award winner in program history.

Winning Weekly Awards: Valpo actually claimed three weekly awards on the 26th, as Nicole Norfolk was recognized as MVC Defensive Player of the Week for her work in the clean sheets. It is the first time the soccer program has claimed a trio of weekly awards from the conference office since its debut weekend as a full-fledged MVC member in August 2017. The Beacons have now earned a total of five weekly awards this season, as Molly O’Rear was honored as MVC Freshman of the Week on Sept. 20 as well.

A Memorable First Goal: Freshman Molly O’Rear picked quite the time to find the back of the net for the first time in her collegiate career, striking in the 87th minute to give Valpo the 1-0 win at UNI Sept. 17. O’Rear’s match-winner was the latest match-winner in regulation by a Valpo player since Kelsey Jahn struck at 89:33 in the 2017 MVC opener at Missouri State.

Looking For Conference Success: With MVC play under way, Valpo is looking to build on its success within conference play over the last two seasons. Since the start of the spring 2021 campaign, the Beacons are 12-4-4 within regular season MVC matches - a mark which improves to 12-2-4 with the removal of the two Loyola matches.

Always in the XI: Four players have started all 12 matches for Valpo this season: Allie Anderson, Kiley Dugan, Natalie Graf and Nicole Norfolk. In their fourth season in the Valpo uniform, Dugan and Norfolk have both started all 62 matches since stepping on campus.