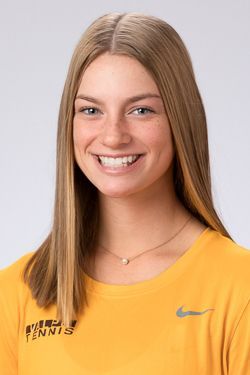 Prep: Four-year letter winner in varsity tennis… Earned all-state accolades following her freshman and junior seasons… Three-time scholar-athlete recipient and was a nominee for the Detroit Free Press Girls Tennis Player of the Year as a sophomore… After being named the team’s co-MVP as a freshman and sophomore, earned the team MVP honor outright during her junior campaign… Has also participated in the USTA Team Cup, an annual event for junior players… Was also a member of Churchill High School’s swim team, where she was a four-year letter winner, the team’s Rookie of the Year, a two-time state qualifier and broke a school record in the 200-medley relay.

Personal: Daughter of Sherry and Mark McConnell… Has a sister, Grace (17)… Majoring in biology… Competed in pageants when she was younger and won Junior Miss of Westland… Loves country music.