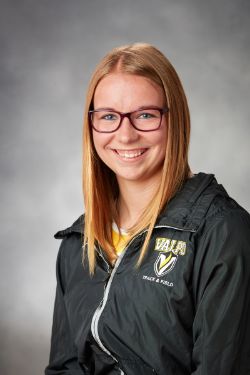 Prep: A four-year varisty letter-winner at Lyons Township ... seleced as the field event team captain for her senior year at LTHS ... holds school-best record in the pole vault for both indoor and outdoor events ... named to the Honor Roll each of her four years at LTHS ... awarded the Stacy Ann Baker Academic Scholarship for her efforts in the classroom and on the field.

Personal: Sarah is the daughter of Darlene and Andrew Peters ... major is Nursing ... born May 9th.