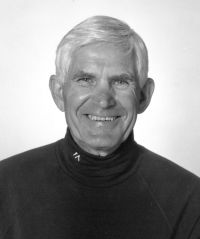 Known throughout the baseball world for 44 years as Dr. Fix-It, Bill Buhler was an athletic trainer for the Los Angeles Dodgers from 1951-95, serving as the Dodgers' head trainer from 1961 to 1995.

He received his start in the profession in 1947 as a student at VU, where he worked with the athletic teams. Buhler was one of the original members of the National Athletic Trainers Association and a founding father of the Professional Baseball Athletic Trainers? Society.

He became recognized throughout the baseball and athletic training professions for inventing protective equipment for baseball players and umpires. In response to a neck injury to a catcher who was wounded by a piece of broken bat, Buhler and Dodgers; catcher Steve Yeager invented a throat guard. This protective piece has become an essential part of catchers and umpires equipment.

Buhler was inducted into the National Athletic Trainers Association Hall of Fame in 1996. He also was honored with the Valparaiso University Alumni Achievement Award.