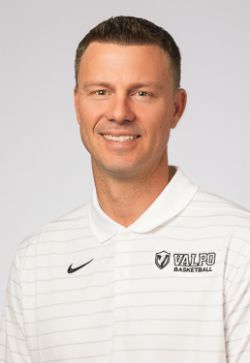 Matt Lottich is in his seventh season as the head coach of the men’s basketball program in 2022-2023. He owned a 97-96 record over his first six seasons as head coach.

During the 2021-22 campaign, Lottich helped Valpo players earn seven different Missouri Valley Conference postseason honors won by five different players. His team finished fourth in the MVC in free-throw percentage (.759), field-goal percentage (.459), assists per game (12.5) and steals per game (6.4) while finishing third in assist/TO ratio (1.1). Numerous players reached individual accomplishments under Lottich’s watch, including Kevion Taylor scoring his 2,000th career point, a pair of Valpo players finishing in the top eight in the MVC in field-goal percentage and Ben Krikke finishing as one of three MVC players with a field-goal percentage of 50 percent or better and a free-throw percentage of 80 percent or better. Freshman walk-on Preston Ruedinger finished as the only player in the nation with 30 or more assists and fewer than 10 turnovers.

The 2019-2020 team’s finest hour came on the biggest stage, as Lottich led the squad to three victories in as many days at Arch Madness, the 2020 State Farm MVC Men’s Basketball Tournament in St. Louis. Lottich’s team came from 18 down to upset Loyola in the MVC quarterfinal, tying for the second-biggest comeback in MVC Tournament history. During his time guiding the program, Lottich has instilled a no-quit attitude. The Loyola comeback marked the sixth time in 2019-2020 that Valpo came from double figures down to win. On 11 occasions, Valpo trailed by at least 10 points and eventually tied the game or took the lead. Valpo also became just the second team in the long history of the Missouri Valley Conference to come from 17 or more down to win twice in one season, joining Creighton from 2007-2008.