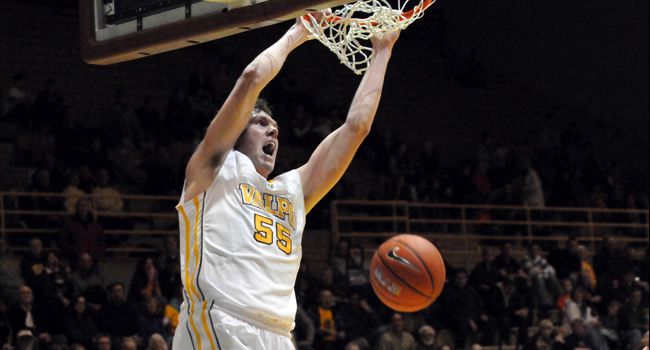 Juniors Ryan Broekhoff (Frankston, Victoria, Australia/Australian Institute of Sport) and Kevin Van Wijk (Hoofddorp, Netherlands/Katholieke Scholengemeenschap Hoofddorp) combined for all ten points in a 10-0 run that put Valparaiso up nine points with seven minutes to play, and the Crusaders would never trail again, eventually earning a 60-55 victory over UIC Saturday afternoon in Chicago.  The win guarantees Valpo a share of first place in the Horizon League standings at the halfway point of the league schedule.

“UIC did an excellent job of making us defend them tonight, and really made us work offensively to get good shots,” said Crusader head coach Bryce Drew.  “I thought we had some good looks in the first half that just didn’t fall, but the team did a great job adjusting in the second half in working to get even better looks.  Our defense was really what won the game for us tonight, though.  It really allowed us to keep the momentum even in the stretches when we weren’t able to get baskets.”

After Paris Carter had given the Flames a 43-42 lead with 10:18 to go on an inside basket, the pair of Crusader juniors went to work.  First, it was Van Wijk down low, as on back-to-back possessions, Will Bogan (Boise, Idaho/Vallivue [Ole Miss]) and Ben Boggs (Roanoke, Va./Hidden Valley [Virginia Tech]) found the Netherlands native in the post for layups, the second of which gave Valpo a 46-43 lead.

Then, Broekhoff took advantage of his ability to put the ball on the floor from the perimeter.  Two straight Crusader trips saw him start the dribble above the 3-point line, drive to the basket past his defender and finish at the rim, pushing Valpo’s advantage to seven points.  On the next defensive possession, Broekhoff scooped up a pass which had been knocked away on the perimeter and took it coast-to-coast himself for the one-handed slam to make it 52-43 Valpo with 6:55 to go.

While the Crusader offense would not hit another field goal for the rest of the game, the defense came up big, allowing just one basket over the next four minutes as part of a stretch where it surrendered just four points in nearly 10 minutes.  The Flames finally got back on the scoreboard with a pair of free throws with 2:47 to play, but Van Wijk responded with two of his own on the other end to give Valpo a 55-47 advantage with 2:19 remaining.

UIC had one last push remaining, however, knocking down 3-pointers on back-to-back trips to cut the Crusader edge to 55-53 as the clock ticked inside 60 seconds.  Valpo worked the shot clock all the way down and got the ball to Van Wijk underneath, who missed a layup but was able to tip the ball out to Jay Harris (Aurora, Ill./Oswego East), who corralled it for the key offensive rebound with 37 seconds remaining.

After the Flames knocked the ball out of bounds, it would eventually be Harris with the ball in his hands with 21 seconds to go as he was fouled, setting up a one-and-one.  The sophomore coolly drained both free throws to make it 57-53 Valpo, and after a UIC miss, Broekhoff hit one of two to make it a five-point game with ten seconds remaining.  The Flames got a quick layup on the other end, but Matt Kenney (Mooresville, Ind./Mooresville) hit two more free throws with just under five seconds to go to secure the victory.

Neither team could gain control of the game in the opening 20 minutes, as the first half featured six ties and eight lead changes.  Van Wijk scored 10 points in the game’s first 10 minutes, while Harris had five early points as well as the Crusaders gained a 20-15 lead halfway through the stanza, but UIC countered by out-scoring Valpo 14-7 over the last 10 minutes of the half to take a 29-27 lead into the locker room.

UIC pushed its lead to six points early in the second half, but the Crusaders responded with nine straight to re-take the lead.  Richie Edwards (Lakeland, Fla./Lakeland [Hillsborough C.C.]) hit a pair of free throws and then a 3-pointer during the spurt, while Kenney and Harris added baskets as well as Valpo went up 36-33 with 15:30 to play.  Harris had a total of three floaters for baskets during the first eight minutes of the second half, helping the Crusaders to keep pace with the Flames until the decisive run came about.

Van Wijk ended the night with a game-high 20 points, continuing his strong play in Horizon League action.  The Crusader big man went 8-of-14 from the floor and 4-of-5 from the free throw line while also securing a team-high six rebounds.  Harris scored in double figures for the third straight contest, pouring in 13 points off the bench, while Broekhoff added 12 points, five rebounds and three steals.  Valpo shot just 44% (22-of-50) from the floor, its worst effort in a league victory this season, but went 13-of-16 (81.3%) from the foul line, blocked six UIC shots, led by four rejections by Kenney, and forced 13 turnovers.

Valparaiso (14-7, 7-2 Horizon) will put first place on the line Thursday evening when the Crusaders start the Wisconsin road trip at Green Bay.  Tipoff is slated for 7 p.m., and as always, all the action can be heard live on the Valpo Sports Radio Network and seen online on the Horizon League Network.  Links to both the audio and video webcasts, as well as live stats, will be available at www.valpoathletics.com.