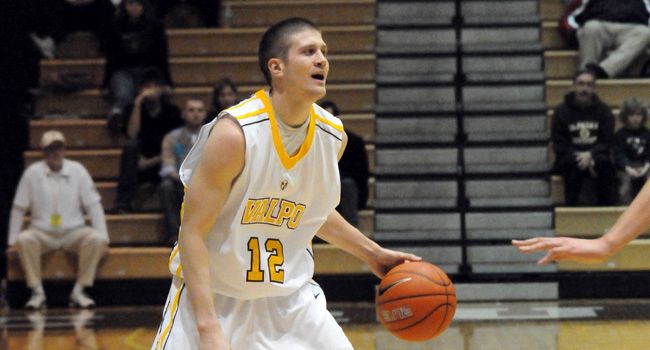 “You’ve got to credit [head coach] Brian [Wardle] and his team tonight; they came out and played extremely hard and with a lot of energy tonight,” said Crusader head coach Bryce Drew.  “It’s very important to protect the home court in this league, and Green Bay has done a tremendous job of that all year long.”

Boggs hit all three of his first-half attempts from behind the arc, and added a pair of triples in the final 20 minutes as well as a layup for his 17 points, surpassing his 14-point effort at Loyola two games ago.  The junior also pulled down seven rebounds as well.  Junior Ryan Broekhoff (Frankston, Victoria, Australia/Australian Institute of Sport) added 14 points and a team-best nine rebounds.

Broekhoff would hit a 3-pointer on Valpo’s third possession of the game, but that would be the Crusaders’ only points until nearly six minutes into the game, when Boggs hit his first triple.  Meanwhile, Green Bay opened the game 5-of-8 from the floor to open a quick 12-3 lead before Boggs’ first basket.

The deficit was still eight points, as the Phoenix led 16-8 seven minutes into the contest, but Boggs connected on two 3-pointers over a three-possession stretch to quickly cut the Green Bay lead to just two points at 16-14.  Following a 3-pointer by Green Bay’s Kam Cerroni, sophomore Jay Harris (Aurora, Ill./Oswego East) hit two free throws and junior Kevin Van Wijk (Hoofddorp, Netherlands/Katholieke Scholengemeenschap Hoofddorp) converted an inside basket to move the Crusaders within one point, 19-18, at the halfway point of the first half.

Green Bay extended its lead to as many as six points in the second 10 minutes of the opening stanza, but Broekhoff cut that deficit in half with a 3-pointer with four minutes to play in the half.  Valpo would limit the Phoenix to just two free throws following Broekhoff’s 3-pointer, but the Crusaders couldn’t take advantage, going scoreless over the final four minutes as Green Bay went into the break ahead 32-27.

The opening of the second half was the antithesis of the first half, as both squads came out hitting four baskets apiece in the opening five minutes of the period.  Green Bay led 42-36 with 13:34 to play, but back-to-back layups by Harris and Boggs moved the Crusaders back within two points.  Later, with the deficit six, redshirt junior Erik Buggs (Memphis, Tenn./Mitchell) hit a pair of free throws to cut the Phoenix lead to 46-42 with 11:06 remaining, but Green Bay scored the next seven points as part of a 19-7 stretch to take control for good.

Harris rounded out a trio of Crusaders in double figures, hitting a late triple to end the night with 11 points.  Valpo committed just 10 turnovers on the night, but hit just 41.3% (19-of-46) from the floor, including just 11-of-28 from inside the arc, and could grab just four offensive rebounds.

“The great thing is that there’s always another game coming up,” said Drew.  “We’ve got a quick turnaround of 36 hours before our next game, and we’re going to prepare and focus on that game.”

Valparaiso (14-8, 7-3 Horizon) closes out its four-game road trip Saturday afternoon, as the Crusaders will take on Milwaukee at 1 p.m. in the Horizon League Network Game of the Week, available locally on Comcast SportsNet Chicago.  As always, the game can be heard on the Valpo Sports Radio Network and also seen online on the Horizon League Network.  Links to the live audio and video broadcasts, as well as live stats, will be available at www.valpoathletics.com.