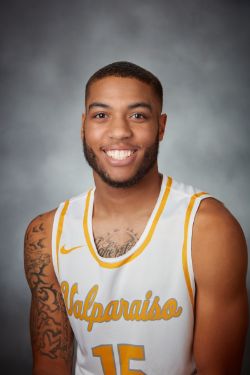 2013-14: Earned spot on the Horizon League All-Freshman Team for his rookie season ... appeared in all 34 games for the Crusaders, making 23 starts ... averaged 6.5 points and 2.4 assists per game, the latter ranking second on the team ... paced Valpo with 35 steals on the year ... scored in double figures eight times ... debuted with eight points in win over Murray State Nov. 8 ... earned first career start Nov. 23 versus James Madison and scored in double digits for the first time, hitting 5-of-7 from the floor for 12 points to go with season-high four steals ... played 51 minutes in triple-overtime contest against Mercer Nov. 29, scoring 15 points ... earned Horizon League Freshman of the Week honor Dec. 2 for performances against UCF (Nov. 26 - 10 points, four assists), Mercer and Cincinnati Christian (Nov. 30 - 11 points, career-high eight rebounds) ... scored 11 points in back-to-back games to kick off league play Jan. 2 against UIC and Jan. 4 at Oakland ... paced the Crusaders with a season-best 22 points in win at Detroit Jan. 15 ... hit 5-of-7 from the floor and 10-of-12 from the free throw line against the Titans ... followed with 12 points the next game versus Milwaukee Jan. 18 ... earned HL Freshman of the Week accolades for the second time Jan. 20 ... dished out season-high eight assists in win over Green Bay Jan. 29.

Prep: A four-year letterwinner for the Redhawks ... earned All-Conference honors as a senior ... led Marist to regional final during his final season after helping program capture the regional championship as a junior ... set program record for assists as a senior ... named SouthtownStar Boys Basketball Player of the Week in November of 2012 after averaging better than 26 points per game in leading Marist to the District 218 tournament title ... played AAU basketball for the D-Rose All-Stars for two years after previously playing with Ferrari.

Personal: Lexus is the son of Reggie and Annetta Williams ... major is accounting.