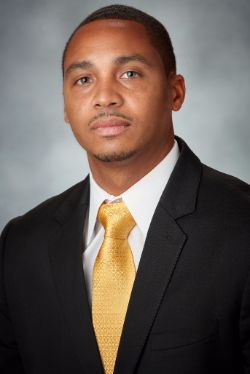 David Ragland joined the Valparaiso University men’s basketball coaching staff as an assistant coach in April of 2016, and enters his third season with the Crusaders in 2018-19. Ragland arrived to Valpo with 12 years of collegiate coaching experience under his belt.

Ragland helped guide the Crusaders to 15 wins during the 2017-18 campaign as Valpo transitioned into the Missouri Valley Conference - the nation's eighth-ranked conference. In his first season on the bench at Valpo in 2016-17, Ragland helped lead the Crusaders to 24 victories, a Horizon League regular season championship and an at-large bid into the Postseason NIT.

Prior to his tiime with the Crusaders, Ragland spent the 2015-16 season on the bench as an assistant coach at Northern Kentucky, helping to guide the Norse in NKU’s first season as a member of the Horizon League. Before NKU, Ragland spent one season as an assistant at Bowling Green as the Falcons won 21 games and earned a postseason win in the opening round of the CollegeInsider.com Postseason Tournament.

Ragland was a member of the Indiana State coaching staff as an assistant coach for four seasons (2010-2014), helping to lead the Sycamores to 79 wins over his four seasons. Indiana State appeared in postseason play in each of his four seasons on the bench, including an NCAA Tournament berth in 2010-11, and earned four victories over nationally-ranked opponents.

Ragland also brings head coaching experience to Valparaiso, spending two years at the helm of the Vincennes men’s basketball program. He guided the Trailblazers to 22 wins in each of his two seasons as head coach, extending the program’s run of 20-win campaigns to 29 straight seasons, and led Vincennes to the NJCAA district tournament finals in 2009-10. Prior to becoming head coach, he worked three years as an assistant coach at Vincennes and spent one season as an assistant at Frank Phillips College.

A 2003 graduate of the University of Southern Indiana, Ragland played his final two years of collegiate basketball for the Screaming Eagles – helping lead USI to 47 wins and pacing the team in assists both seasons. Prior to arriving at USI, Ragland played two seasons at Missouri Southern State College, where as a freshman he was a member of a 30-3 team which advanced to the NCAA Division II Final Four.

Ragland and his wife, Annie, have two children: Ava and Joshua.