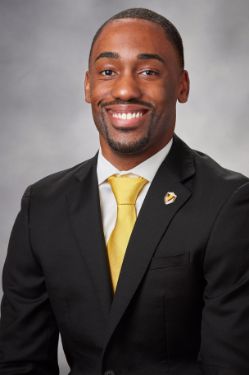 In his third season working with the Valparaiso University men's basketball program, Joel Zimba enters his second season as the program's director of basketball operations for the 2017-18 season.

Zimba directs the day-to-day operations of the program and acts as the main liaison between the team and other areas in the athletics department and University. He is responsible for the team budget and travel itineraries, organizes and runs team camps, coordinates recruit on-campus visits, orders and inventories team gear, and oversees the managerial team.

Zimba arrived at Valpo prior to the 2015-16 campaign and spent his first season as a graduate manager for the Crusaders before assuming the role of director of basketball operations. In his first two years, the Crusaders have won 54 games - including a school-record 30 wins in 2015-16 - and captured two Horizon League regular season championships. Valpo has earned a bid to the NIT in each of Zimba's first two years and advanced to the NIT title game in 2015-16.

Zimba has spent numerous summers working as a camp counselor and coach at the Bo Ryan Basketball Camp and the Wesley Matthews Skills Academy. He also assisted Matthews in his personal workouts during the summer of 2014.

Zimba graduated from the University of Wisconsin-Madison in 2011 with a bachelor's degree in Afro-American Studies Intergroup Relations. He received his master's degree in Sports Administration from Valparaiso in 2016. He and his wife, Krystin, were married in June of 2017.