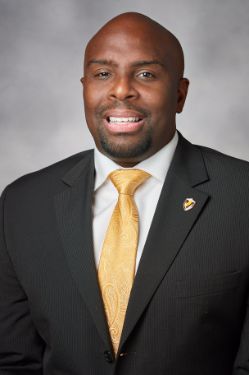 Emanuel Dildy joined the Crusader coaching staff as an assistant coach in July of 2017 and enters his first season at Valpo in 2017-18. A Chicago native, Dildy brings power conference and Missouri Valley Conference coaching experience to the Valpo bench as the Crusaders prepare for their inaugural season of MVC play.

Dildy spent the 2016-17 coaching in the Southeastern Conference, as he was a member of the Missouri staff as an assistant coach. Prior to arriving at Mizzou, Dildy worked for three seasons (2013-16) as an assistant coach at Loyola, where he helped coach the 2014 MVC Freshman and Newcomer of the Year in Milton Doyle.

Dildy played for two seasons at New Mexico State before transferring to Eastern Illinois, where he was an All-Ohio Valley Conference selection as a senior. After graduating from EIU in 2005, Dildy played professionally in Germany for two years and stateside for one season in the International Basketball League before embarking on his coaching career.