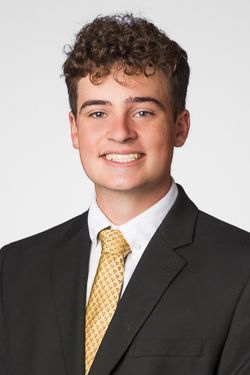 2021-22: Finished the season with a 76.28 scoring average over 25 rounds... Golfed in 10 of the team’s 13 tournaments... Carded a 213 (-3) at the Valpo Fall Invitational, finishing third in a 73-player field... Through two seasons, holds a career scoring average of 76.13 that ranks tied for eighth in modern program history... Tied for the sixth-best 18-hole score in program history with a 67 (-5) in the second round of the Valpo Fall Invitational on Sept. 20... Earned Valparaiso University Presidential Academic Honors... Received MVC Scholar-Athlete Honorable Mention.

2020-21: Golfed all 22 rounds and appeared in all eight events during his freshman season… Posted a scoring average of 75.95 including three rounds of par or better… Made a strong first impression by tying for runner-up honors in his first collegiate meet at the Lewis Flyer Intercollegiate on Sept. 28-29. He carded a 54-hole score of 220 (+4) including a 71 (-1) in the final round that stood as his season best… Matched his season best with a 71 in the opening round of The Invitation at Savannah Harbor on Feb. 20… Ranked third on the team in the MVC Championship on April 26-27 in Flossmoor, Ill… Member of MVC Academic Honor Roll.