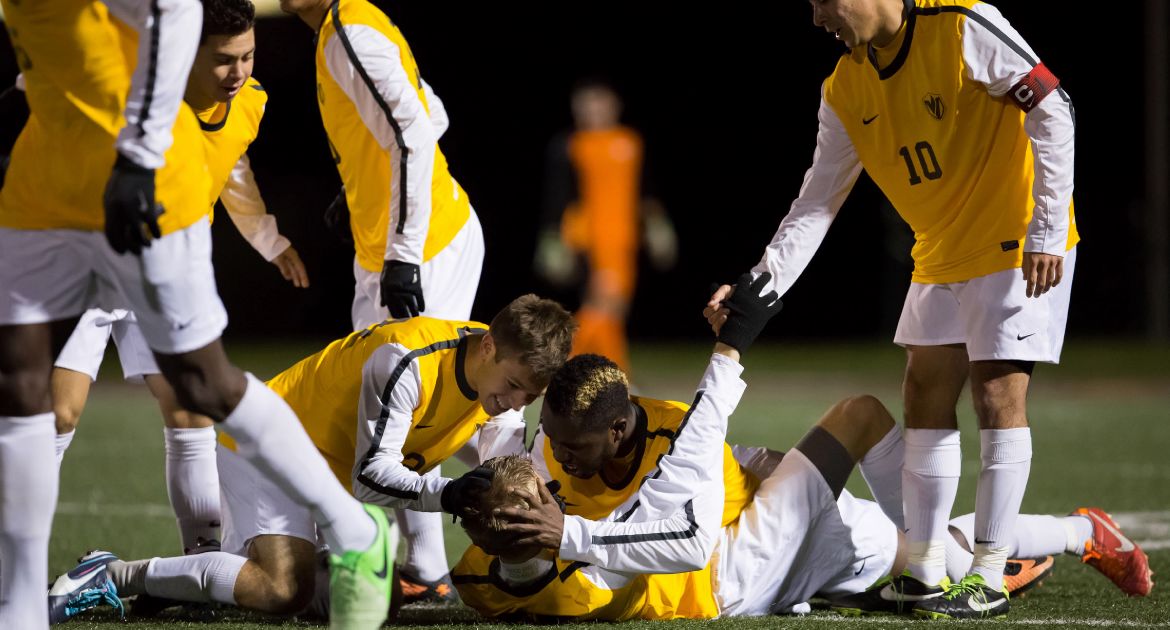 Crusaders Travel to Michigan to Face the #20 Wolverines;

This Week in Crusader Soccer:  In the last week of the regular season, the Crusader men travel to Ann Arbor, Mich. to take on #20 Michigan. Valpo then has the week to prepare for its regular season finale with Horizon League foe Detroit on Saturday. Saturday's match carries plenty of post-season implications. The match will also serve as senior night for seven Crusaders.

Previously: With less than four minutes remaining in the Crusaders’ match at Cleveland State on Saturday, Charles Barden was able to convert from the spot to put the Crusaders a goal up on the Vikings. The Crusaders held onto the lead as time expired to earn their first Horizon League victory of the season and keep hope alive for a berth in the Horizon League championship.

Following The Crusaders: Both games this week will have live stats available through ValpoAthletics.com. Saturday's match against Detroit will have free live video available through the Horizon League Network. Visit @VUMSO on Twitter to view comments and photos leading up to each match.

Scouting the Opposition:  Michigan - The Wolverines enter Monday night's match ranked #20 in country with a 7-5-3 record. Michigan has scored 20 goals and conceded 19. James Murphy leads the team in points with ten. Murphy has four goals and two assists to his name. TJ VanSlooten has also added four goals for the Wolverines. Tyler Arnone leads the team in assists with five. Goalkeeper Adam Grinwis has started in 15 games for Michigan and has given up 19 goals for a 1.25 G.A.A. Detroit - The Titans enter Saturday night's match without a win in conference play. The Titans have 18 goals for and 28 goals against. Adam Bedell has had a stellar season with eight goals and five assists with 21 total points. Nathan Steinwascher has started every game in goal for the Titans. Steinwascher has a 1.54 G.A.A.

Notables: Charles Barden scored his fourth goal of the season on Saturday night. With the goal, Barden now leads the team in points with ten, and is tied with Nick Suker in goals scored with four. Goalkeeper Tom Serratore earned his third shutout of the season Saturday against Cleveland State. Serratore made two important saves in the match.

Finishing Chances: Valpo now sits with 14 goals scored in 15 games played. Eight players have accounted for the 14 goals scored. Kevin Klett, Eric Nieto, Adrian Graham, Julio Velasquez, and Jordan Aidoud each have one goal this season, while Todd Vervynckt has netted two goals to his name. Nick Suker is second in goals scored with three and Charles Barden leads the team with four.

Another Ranked Opponent: Currently, the Crusaders have played four teams that have been ranked in the Top 25 of the national rankings, with the fifth coming this Monday against #20 Michigan. Four of the games versus ranked opponents have come on the road.  The Crusaders played #24 Michigan State, #12 Tulsa, #19 Dayton, and #24 Milwaukee. Valpo is 1-3-0 against Top 25 opponents - the win coming in a 2-1 victory over Michigan State.

Horizon League Championship Berth: With a 1-0 win over Cleveland State Saturday, Valpo kept its post-season hopes alive. Currently, the Crusaders are on 5 points in the league. In order to secure a berth in the Horizon League Championship, the Crusaders must claim all three points in their game against Detroit on Saturday. Additionally, Green Bay must drop all three points in their match at UIC. A win over Detroit would put Valpo at 8 points, while a loss at UIC would keep Green Bay at 7 points. A Green Bay victory or draw at UIC would put the Phoenix ahead of the Crusaders with either 10 or 8 points. Even though Valpo and Green Bay would be tied at 8 points with a Green Bay draw at UIC, the Phoenix would advance because they own the tie-breaker. If the Crusaders capture a berth in the tournament, they would travel to either Oakland, Milwaukee, or Cleveland State on Tuesday, November 12th.

Senior Night: Seven seniors will be recognized before the match on Saturday night for everything that they have given to the men's soccer program at Valparaiso. Seniors Todd Vervynckt, Charles Barden, Yannick Iwunze, Jesse Ortiz, Daniel Killen, Ben Burnett, and Luke Dunn will each be recognized before the match. This was a group that helped the Crusaders capture the Horizon League Title in 2011.

Home Sweet Home: The Crusaders have just one home game remaining of the schedule, and that is this Saturday's regular season finale with Horizon League foe Detroit. The Crusaders were scheduled to play five home games this season; Mother Nature had other plans however, as Valpo's home game against Western Michigan was canceled due to severe weather. Therefore, Saturday's game will mark just the fourth home game of the season for the Crusader men. Valpo is 1-2-0 at home.

Champions in the Classroom:  In 2012, Todd Vervynckt was selected to the Horizon All-Academic team, the CoSIDA Academic All-American Third team, and the All-District V first team.  Vervynckt is in the Mechanical Engineering program at Valparaiso.