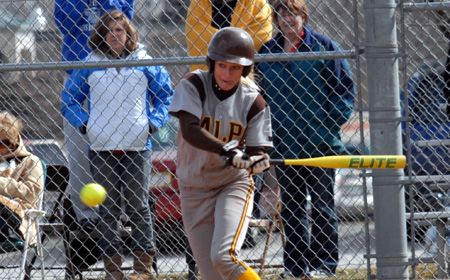 Valparaiso held a 6-2 lead after the top half of the sixth in its season opener Friday against Missouri State at the Frost Classic in Chattanooga, Tenn., but the Bears scored five times in their final two at-bats, including a walk-off solo homer in the seventh, to take the 7-6 win.  Valpo’s scheduled opener against Sacred Heart was wiped out due to rain.

The Crusaders got the season going off on the right foot right out of the box.  Leadoff hitter Karen Korb (Indianapolis, Ind./Lutheran) singled through the left side to open the top of the first, and came home on Ashley Wolter’s (Denver, Iowa/Denver) double to left to give Valpo a 1-0 lead just two batters in.  Two batters later, after advancing to third on a passed ball, Wolter came home on an RBI single by freshman Jordan Rutkowski (Alden, N.Y./Alden).  Singles by Whitney Warner (Greenwood, Ind./Center Grove) and Jill Jacobson (Beecher, Ill., Beecher) followed, the latter plating Rutkowski to give Valpo a 3-0 lead.

Missouri State got single runs in the bottom of the second and the bottom of the fifth to get to within one at 3-2, but Valpo responded with three more runs in the top of the sixth.  Warner got the inning going with a leadoff double, and pinch-runner Jamie Weinburger (Eagle River, Alaska/Eagle River) scored on a Jacobson single.  Later in the inning, with two runners on, Korb delivered a big 2-RBI single to score Sara Strickland (Phoenix, Ariz./Horizon) and Alex Lagesse (Beecher, Ill./Beecher) and push the Crusader edge to 6-2.

But the Bears scored four times in their half of the sixth to tie the game.  Jessie Smith led off the frame with a solo home run, while Jenna Schwark rapped a 2-RBI double later in the inning.  The tying run scored on a Crusader error, making it 6-6.  Valpo got a runner to third in the top of the seventh, but could not push a run across the plate, and Smith led off with a solo home run for the second time in as many innings in the bottom of the seventh for the game-winning run.

Sam McGee (Bloomington, Minn./Jefferson) got the start in the circle in her first career game and had a solid outing, going 5+ innings and allowing just two earned runs on five hits.  Stephanie Kelly (Plainfield, Ill./Plainfield) took the loss for the Crusaders, allowing four runs in her 1+ innings of work.  Lauren McGinley (3-1) registered the final two outs for MissouriState to earn the victory.

The Crusader offense tallied 11 hits in the season opener, getting two-hit games from Korb, Wolter, Rutkowski, Warner and Jacobson, while Korb and Jacobson each drove in two runs.  Valpo stole two bases on three attempts as well, one season after leading the nation in stolen bases/game.

“I was really impressed with our play today, hitting the ball as well as we did, especially while starting four freshmen and two sophomores,” said Crusader head coach Randy Schneider.  “We played really well, but just didn’t finish, and that’s something as a young team, we’ll learn over time.  Today’s game really gave me a lot of optimism about our overall athleticism as a team.”

Valparaiso (0-1) continues play at the Frost Classic on Saturday with a pair of scheduled games.  The Crusaders are slated to take on Tennessee Tech at 9 a.m. CST and then to face the host Lady Mocs at 2 p.m.  Both games will have live stats available through www.valpoathletics.com.