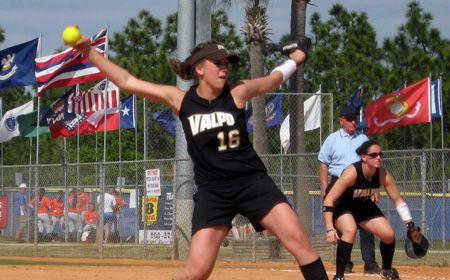 For the third straight day, the Valparaiso softball team split two games at the Rebel Spring Games in Orlando, Fla.  The Crusaders defeated Fairfield in the opener, 8-1, before dropping a 6-3 decision to Holy Cross in the nightcap.

“We got some nice performances today out of a lot of players,” said Crusader head coach Randy Schneider.  “I’m impressed by the way we’ve played so far, despite a few miscues, and our hitting and baserunning are definitely at high levels for this point of the season.  We are continuing to improve every day.”

Valpo struck first in the opener against the Stags, going for three runs in the top of the third.  With runners on second and third with one out, Karen Korb (Indianapolis, Ind./Lutheran) tallied an RBI single to plate Sadie Conner (Washington, Ill./Washington).  Korb stole second to put runners on second and third again, setting up an RBI opportunity for Jill Jacobson (Beecher, Ill./Beecher).  Jacobson grounded out to first, scoring pinch-runner KC Boldt (Red Wing, Minn./Red Wing), while Korb would continue home on a Fairfield error.

The Crusaders added a single run in the fourth on a sacrifice fly by Katie Williams (Chicago, Ill./Lane Tech [Kishwaukee C.C.]), but Fairfield responded with two doubles in its half of the inning to make it 4-1.  Valpo answered in the fifth with three more runs, as Jordan Rutkowski (Alden, N.Y./Alden) drove in Korb with an RBI single, while Jacobson and Rutkowski would both steal home on double steals later in the frame.  Rutkowski would tally another RBI single in the seventh to cap the scoring.

Sam McGee (Bloomington, Minn./Jefferson) had a stellar outing to improve to 2-0 on the season, throwing a complete-game four hitter while striking out six batters.  Meghan Borst took the loss for Fairfield, throwing four innings and giving up five runs.  Wolter led the Crusader offense with three hits in the win, while Valpo tallied seven stolen bases, including two apiece by Jacobson and Rutkowski.

“We came out and set some new goals for our first game, and I really give our players a lot of credit, as they came out after some tough losses earlier this week and maintained their excitement and played a great first game,” said Schneider.  “Sam really pitched a stellar game.  She is proving early that she will be a great pitcher for this program for years to come.”

Valpo failed to open the scoring for the first time in its seven games in the nightcap, as Holy Cross tallied a single run in the top of the first.  The Brown and Gold responded in the bottom half of the inning when Rutkowski scored on an illegal pitch.  Holy Cross regained the lead with an RBI single in the top of the third, but again Valpo responded immediately, as Alex Lagesse (Beecher, Ill./Beecher) led off the frame with a triple and came home on a sacrifice fly by Jacobson.

That was the last time Valpo would hold a share of the lead, however, as Holy Cross strung together four hits in the top of the fourth to score three times and go ahead 5-2.  Joylyn Ichiyama (Torrance, Calif./Redondo Union) connected for her first career home run in the bottom of the inning to cut the deficit to two, but Valpo was unable to push another run across the plate in the final three innings.

Shaleigh Jansen (Ottawa, Ill./Ottawa Township) fell to 0-1 on the season, taking the loss in relief after allowing three runs in 3.1 innings of work.  Caitlin Belanger earned the complete-game win for Holy Cross.  Ichiyama and Rutkowski both registered two hits in the nightcap to lead the Valpo offense.

“We had a tough time adjusting to the strike zone against Holy Cross, which resulted in some walks in untimely situations,” said Schneider.  “It makes you pitch differently when dealing with a tighter zone, but you have to give Holy Cross credit, as they put the ball in play when they needed to and got the ball past our fielders.  Belanger really came out and pitched a great game for them, and they made some big defensive plays that were really the difference.”

Valparaiso (3-4) plays another set of two games on Saturday in Orlando.  The Crusaders face South Dakota at 8 a.m. CST before taking on Saint Francis (Pa.) at noon.