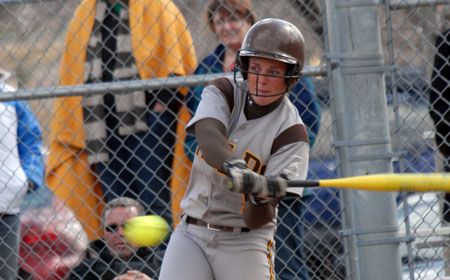 Freshman Sam McGee (Bloomington, Minn./Jefferson) tallied Valparaiso’s third straight shutout in the opener as the Crusaders defeated La Salle Tuesday at the Rebel Spring Games in Orlando, Fla., 9-0 in five innings.  In the nightcap, South Dakota rallied for three two-out runs in the seventh inning to earn a 3-1 victory over Valpo.

Karen Korb’s (Indianapolis, Ind./Lutheran) wheels got the Crusaders on the board immediately in the top of the first against the Explorers.  Korb singled, stole second, advanced to third on a groundout and scored on a wild pitch.  Valpo added two more runs in the third as Jordan Rutkowski (Alden, N.Y./Alden) registered an RBI double and came around to score on a Kelsey Phalen (Batavia, Ill./Batavia) single, while another tally crossed the plate in the fourth when Jill Jacobson (Beecher, Ill./Beecher) tallied an RBI single.

The Crusaders busted the game wide open in the fifth inning, pushing five runs across the plate en route to winning via run rule.  With nobody out and the bases loaded, Whitney Warner (Greenwood, Ind./Center Grove) and Sadie Conner (Washington, Ill./Washington) drew back-to-back walks to extend the lead to 6-0.  Jacobson followed with a sacrifice fly, her Valpo single-season record fifth of the 2009 campaign, while pinch-runner KC Boldt (Red Wing, Minn./Red Wing) came around on the same play on a La Salle error.  Conner raced home on a wild pitch later in the frame to cap the scoring.

McGee was again dominant in the circle, improving to 4-0 on the season while scattering five hits and striking out four Explorer hitters.  Laura Beth McCreesh was charged with the loss for La Salle, going four-plus innings and giving up all nine runs.  Rutkowski registered two hits and two runs scored to lead the Crusader offense, while Jacobson drove in two runs.

“Sam has been pitching real well down here for us and came through with another nice performance today,” said Crusader head coach Randy Schneider.  “We’ve been real impressed with her so far, and she definitely has the potential to be a real quality pitcher in the Horizon League for us this year in her first season.  Offensively, Kelsey had another good game, getting on base all three times, and Jordan had a couple nice hits.  We did a good job taking advantage of some La Salle struggles to put runs across the plate.”

Valpo scored in the first inning in the nightcap against South Dakota, the ninth time in its 13 games that the Crusaders have plated at least one run in their first time at the dish.  Sara Strickland (Phoenix, Ariz./Horizon) drew a one-out walk and moved over to second on a single by Rutkowski.  The duo pulled off a successful double steal, advancing Strickland to third, and senior Ashley Wolter (Denver, Iowa/Denver) delivered a sacrifice fly to score the freshman and make it 1-0 Valpo.

Neither team would hit the scoreboard again until the Coyotes came up to the plate in the top of the seventh.  Alaina Novotny reached base to lead off the inning on a Valpo error and pinch-runner Jessica Lussman moved over to third base with two outs.  Jasey Goedeken tied the game with an RBI single and came home on an RBI double by Alexa Rudeen.  Callie Roan then tallied an RBI single of her own to score an insurance run, and the Crusaders would go down 1-2-3 in the bottom of the seventh inning.

“It was a good, hard-fought ballgame with South Dakota,” said Schneider.  “They have a quality team, they’re solid throughout the lineup and have a great pitcher, so we knew we’d be in a dogfight.  Unfortunately, we just didn’t close the door when we had the opportunity again.  It started with an error on a hard ground ball, and then they strung together three straight hits with two outs, and you have to give South Dakota credit for sticking in there and making things happen at the end.”

Cortney Heim allowed just four hits in a complete-game win for South Dakota.  Freshman Shaleigh Jansen (Ottawa, Ill./Ottawa Township) had a solid start in the circle for Valpo, allowing just three hits in her 4.2 innings of work.  Stephanie Kelly (Plainfield, Ill./Plainfield) suffered the loss, falling to 2-3 on the season, after giving up the three unearned tallies in the seventh.  The Crusader pitching staff has now gone 24 consecutive innings without giving up an earned run.

“We knew that coming down here, our pitching had the opportunity to be a real strength for us,” said Schneider.  “And it has been a strength for us for the most part down here.  We’re still experimenting a bit with our staff, however, trying to figure out how we can utilize each of our talented pitchers to the best of their ability.”

Valparaiso (8-5) continues play at the Rebel Spring Games with another pair of contests on Wednesday.  The Crusaders will face Buffalo at 10 a.m. CST before taking on Robert Morris at 2 p.m.