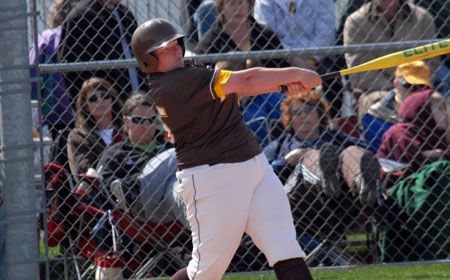 A three-run first inning by Ball State was too much for Valparaiso to overcome Wednesday afternoon in Muncie, Ind., as the Cardinals defeated the Crusaders 4-3.  The second game was canceled due to inclement weather in the bottom of the first inning.

Valpo jumped on the board immediately in the top of the first inning, as freshman Sara Strickland (Phoenix, Ariz./Horizon) ripped a one-out double to left-center field.  Strickland moved up to third base on a wild pitch before coming home on a bloop single over the shortstop’s head by freshman Jordan Rutkowski (Alden, N.Y./Alden).

Ball State responded immediately in its half of the first frame, plating three runs.  The Cardinals registered back-to-back hits to start the inning, as Allie Pennock’s single scored Lisa Rozanski.  Two batters later, Alyssa Collins reached on an error, driving in Alicia Barkley to give Ball State the lead.  Collins moved up to second base on a flyout and came around to score on an RBI single by Elizabeth Milian.

Faced with trying to rally from a deficit, Valpo got a baserunner in each of the next three innings before finally making its runner count in the top of the fourth.  Freshman Joylyn Ichiyama (Torrance, Calif./Redondo Union) led off with a double off of third base and moved up to third on a sacrifice bunt.  Junior Whitney Warner (Greenwood, Ind./Center Grove) followed with a deep fly ball to center, deep enough to bring home Ichiyama to cut the deficit to 3-2.

Ball State registered an insurance run in the bottom of the fifth, as Barkley led off with a double, moved up to third on an error and eventually scored on an RBI groundout.  The insurance tally proved to be huge the next half-inning, when the Crusaders pushed another run across.  Rutkowski led off with a single and advanced to second on a BSU error, followed by an RBI single from senior Ashley Wolter (Denver, Iowa/Denver) to bring Valpo back within 4-3.  The Crusaders put the potential tying run in scoring position with two out in the seventh, but a pop-up ended the game in the Cardinals’ favor.

Rutkowski led the Crusaders with a perfect 3-for-3 effort at the plate, while Ichiyama added a pair of hits of her own.  Barkley, Milian and Rozanski each tallied two hits for Ball State.  Alex Lagesse (Beecher, Ill./Beecher) took the complete-game loss in the circle for Valpo, scattering ten hits while striking out five batters to fall to 3-1.  Milian improved to 7-7, striking out 12 for the Cardinals.

“Ball State has a nice ballteam, and Milian came in the reigning MAC pitcher of the week,” said Crusader head coach Randy Schneider.  “I was happy we put up nine hits on her, especially once we started being aggressive early in the count, giving ourselves chances to score.  We just watched too many pitches early on to be successful.  Give Ball State a lot of credit, they came out swinging the bats and got three or four hits early in the count in the first inning.  I thought Alex did a good job coming back after that inning and pitching well.”

Valparaiso (12-6) opens the 2009 home campaign at the Valparaiso University Softball Field on Saturday, coinciding with the beginning of Horizon League play, as the Crusaders host Detroit in a doubleheader.  First pitch of the opener is slated for 2 p.m., and all the action can be heard live on WVUR, 95.1 FM Valparaiso, and online at www.valpoathletics.com.  Live stats will also be available through the official Crusader website.