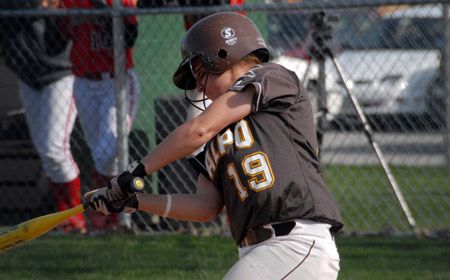 Trailing by four runs through five and a half innings in its Horizon League opener Saturday against Detroit, Valparaiso came all the way back, as a Sadie Conner (Washington, Ill./Washington) 3-run homer set the stage for a walk-off RBI single by Ashley Wolter (Denver, Iowa/Denver) in a 5-4 victory.  The nightcap was dominated by Stephanie Kelly (Plainfield, Ill./Plainfield), who tossed a two-hitter en route to a 7-0 Crusader win.

Detroit utilized timely hitting to earn its four-run advantage in the first game.  Kristin Sclater kicked off the scoring with a solo home run in the second inning, and Ellen Sinclair delivered a two-out, two-RBI single in the third frame.  Erica Houthoofd came through with a two-out RBI single of her own in the fifth inning to push the Titan advantage to 4-0.  Valpo registered seven hits through the first five frames, but failed to push a single run across the plate.

The Crusaders finally dented the scoreboard in the bottom of the sixth.  Sara Strickland (Phoenix, Ariz./Horizon) led off the inning with a double to the center field fence, and two batters later Wolter brought her home with a hard-hit single up the middle.  Detroit erased Wolter from the basepaths on a double play, the Titans’ third of the day, to keep the three-run lead heading into the final inning.

The bottom of the seventh started innocuously enough, as Kelsey Phalen (Batavia, Ill./Batavia) led off on a fielding error by the Detroit shortstop.  Whitney Warner (Greenwood, Ind./Center Grove) wasted no time in the box, ripping a first-pitch single to the outfield to bring the tying run to the plate in the form of Conner.  The sophomore didn’t waste any time either, connecting on the first pitch and sending it over the left-center field fence for her second career home run, tying the game at 4-4.

After a Titan pitching change, Jill Jacobson (Beecher, Ill./Beecher) kept the rally going with a single into left field.  Back to the top of the order, Karen Korb (Indianapolis, Ind./Lutheran) and Strickland both reached on bunt singles to load the bases with nobody out.  Detroit forced Jacobson at the plate to record its first out of the inning, but Wolter stepped up and capped her 4-for-4 game at the dish with a line drive to left-center to plate Korb with the game-winning run.

“I thought we struggled early on getting key hits and our baserunning was out of whack, which prevented us from getting on the scoreboard,” said Crusader head coach Randy Schneider.  “We just had some bad breaks in there with some double plays as well which eliminated baserunners.  Credit our players though, they kept fighting and we strung together a bunch of hits in the seventh inning to bounce back and get the win.  I was very proud to see Sadie step up and get the big-time home run for us, as she had been hitting the ball well all day.”

Shaleigh Jansen (Ottawa, Ill./Ottawa Township) earned her first career victory to improve to 1-1, coming in out of the bullpen to pitch the final two innings and allowing just one hit while striking out two.  Kara Spinelli took the loss for Detroit, falling to 2-6 after giving up four hits and one run in one-third of an inning.

“Shaleigh did a great job coming into the game in relief and pitching well, keeping us in the ballgame and eventually getting her first win,” said Schneider.  “I thought Sam pitched well overall, but just needed to move the ball a bit more today, because she left a few too many balls in the zone.”

The Crusaders carried the momentum from the comeback win into the nightcap, and Kelly stood out in the circle in the second game.  The senior gave up hits in each of the first two innings, but settled in and retired the last 16 batters in order.  Kelly, who improved to 4-3 on the season and lowered her ERA to 1.15, did not walk a batter while striking out five Titans.

“Steph flat-out pitched a great game for us today,” said Schneider.  “She stepped up after that first game as a senior and, after their leadoff hit, gave up just the one more hit and retired the last 16 in a row.”

Valpo got all the runs it would need within two batters, as Strickland delivered an RBI double to score Korb in the bottom of the first.  Joylyn Ichiyama (Torrance, Calif./Redondo Union) later plated Strickland with an RBI single.  Jamie Weinburger (Eagle River, Alaska/Eagle River) and Strickland each registered RBI base hits in the second inning to give the Crusaders some insurance, and Valpo would add two more in the fourth and one in the fifth to cap the scoring.  Spinelli also took the loss in the nightcap for Detroit (3-14, 0-2 Horizon), throwing just 1.1 innings in her start in the circle.

Jacobson and Strickland each had five-hit days over the two games to lead the Crusaders, who recorded 27 hits on the day, at the plate.  Korb and Strickland each scored a team-best three runs, while Conner led the way with three RBIs.  Valpo stole nine bases over the doubleheader, led by three from Korb, who already ranks fourth in a single season in Valpo history with 19 steals and also holds the first and third spots.

“It was really fun to sit back and watch our players hit the ball today,” said Schneider.  “Sara, Ashley, Jill and Sadie all hit the ball extremely well, and when we have people hitting up and down the lineup, it makes us that much tougher as a team.”

Valparaiso (14-6, 2-0 Horizon) looks for the three-game sweep on Sunday afternoon at the VU Softball Field, as the Crusaders host the Titans in the series finale.  First pitch is set for noon, and all the action can be heard live on WVUR, 95.1 FM, Valparaiso and online at www.valpoathletics.com, which will also have a link for live stats.