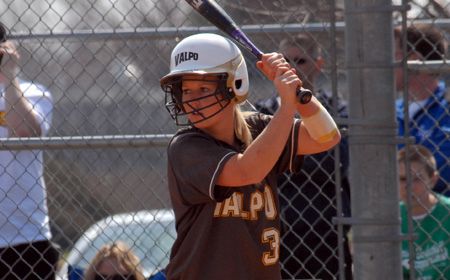 Valparaiso put up its highest scoring output in over two years, scoring multiple runs in all five innings as it downed Northern Illinois in the nightcap Wednesday in DeKalb, Ill., 13-1.  The Huskies struck first in the opener and went on to a 5-3 victory over the Crusaders as the two squads split the twinbill.

Valpo got all the runs it would need in the nightcap in the first inning, as with two out and one on, senior Ashley Wolter (Denver, Iowa/Denver) launched a towering shot that cleared not only the center-field fence, but also another fence set 30 feet further back.  The Crusaders added three more insurance tallies in the second, as sophomore Sadie Conner (Washington, Ill./Washington) ripped a first-pitch RBI double and freshman Sara Strickland (Phoenix, Ariz./Horizon) added a 2-RBI single later in the frame.

Wolter led off the third for Valpo with her second homer of the game and 18th of her career, tying her with Gina Rhoda for the Crusaders’ all-time record.  Freshman Joylyn Ichiyama (Torrance, Calif./Redondo Union) followed with her third home run of the season, hitting a scorcher off the scoreboard behind the left-center field fence, to put the Crusaders ahead 7-0.

The Crusaders made it two straight leadoff homers in the fourth, as Strickland hit a ball that cleared the fence in right field for her first career round-tripper.  Later in the inning, freshman Kelsey Phalen (Batavia, Ill./Batavia) tallied a 2-RBI double and Conner added her second RBI two-bagger of the game.  A Jordan Rutkowski (Alden, N.Y./Alden) RBI double and a Wolter sacrifice fly capped the Valpo scoring in the fifth.  The Huskies got an RBI double with two outs in the fifth to break up the shutout attempt.

Freshman Sam McGee (Bloomington, Minn./Jefferson) improved to 7-0 in her rookie year, going all five innings and giving up just the lone run in the complete-game victory.  Joreigh Landers took the loss for NIU, falling to 2-6 after giving up six runs in two-plus innings in the start.  All six of the hitters from the two-hole through the seven-spot registered multiple hits in the win for Valpo, with Strickland leading the way with a 3-for-3, 3 R, 3 RBI effort.  Wolter went 2-for-2 with three runs scored and four RBIs as well.

In the opener, NIU got on the board first in the bottom of the fourth, as Bailey Ouellette recorded an RBI single and Michelle Williams an RBI groundout to give the Huskies a 2-0 edge.  The lead lasted just one-half inning, however, as with the bases loaded and two outs in the top of the fifth, Strickland lined a 2-RBI single through the right side and off the first-base umpire, plating both Jill Jacobson (Beecher, Ill./Beecher) and Alex Lagesse (Beecher, Ill./Beecher) to tie the game at two apiece.

But the tie game lasted just one-half inning as well, as Husky leadoff hitter Kayla Kramer hit a two-run home run in the bottom of the fifth.  NIU added a solo shot by Carly Norton in the sixth to extend the advantage to 5-2.  The Crusaders pushed a single run across in the seventh as pinch-runner Aubrey Sundling (Huntington, Ind./Huntington North) scored on an RBI groundout by Jacobson, but the potential tying run never got past the on-deck circle for Valpo.

Lagesse took the loss in the circle, falling to 4-2 in the complete-game effort, allowing just six hits but five runs, four of which were earned.  Morgan Bittner improved to 3-8 with the complete-game win for Northern Illinois (5-17).  Karen Korb (Indianapolis, Ind./Lutheran) led Valpo in the opener with a pair of hits, while Strickland drove in two runs, finishing the day with five RBIs.

“I was disappointed in the result of the first game, but it was great to see the way the players responded after the loss,” said Crusader head coach Randy Schneider.  “We came out and got aggressive at the plate, and the results proved that we can hit the ball very well if we are aggressive.  I also thought Sam pitched another good game for us, holding NIU to one run.”

Valparaiso (17-8) returns to the Valparaiso University Softball Field on Saturday, as the Crusaders host UIC in a Horizon League doubleheader at noon.  Live stats will be available for all three games this weekend at www.valpoathletics.com.