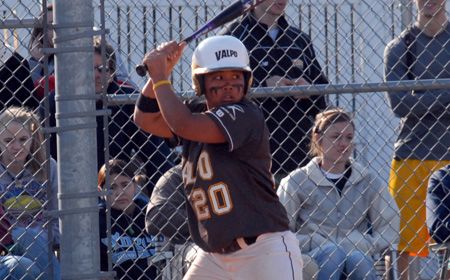 Valparaiso was unable to garner a victory over Wright State Thursday afternoon at the Valparaiso University Softball Field, as the Raiders won the resumption of Wednesday’s suspended game, 9-0, before taking the series finale by a 6-2 count.

“We knew coming into the series that this would be a challenge, as Wright State has a lot of players who have been a part of their last two NCAA tournament teams,” said Crusader head coach Randy Schneider.  “Given the fact they’re one of the best hitting teams in the league, we knew we would have to out-hit them to get wins, and we just didn’t have our best series in that area.  We just have to turn around quick and get ready for our weekend series now against another tough opponent in Loyola.”

Wright State had pushed across five runs prior to the game being halted on Wednesday, and picked up right where it left off when the game resumed Thursday, as Kristen Bradshaw led off the fifth with a homer for the Raiders.  Justine Shilt connected for a two-out, three-run round-tripper in the sixth inning to cap the scoring, as the Crusaders were able to get just one baserunner on in the final two innings.

Sam McGee (Bloomington, Minn./Jefferson) took her first career loss in the circle, giving up eight runs in her five innings of work to fall to 7-1.  Allison Cox earned the complete-game shutout to improve to 1-1, scattering three Crusader hits over the six innings.

The series finale was a pitchers’ duel for the most part, as the only runs either team pushed across in the first six innings were scored by the Raiders in the top of the second.  Shilt went deep for the second time on the day to lead off the frame, while Lindsay Barrett scored an unearned run later in the inning to give WSU a 2-0 lead.  Valpo’s best chance at scoring in the first six innings came in the sixth, when the Crusaders put runners on first and second with one out, but Cox registered a strikeout and then induced a groundout to end the threat.

Wright State (18-14, 6-3 Horizon) added four insurance runs in the top of the seventh, as Bradshaw hit a two-out three-run homer and Shilt followed with a solo shot, her third long ball of the afternoon, to extend the edge to 6-0.  The extra runs proved to be necessary, as the Crusaders recorded four singles in the bottom of the seventh, the last of which off the bat of Joylyn Ichiyama (Torrance, Calif./Redondo Union) brought home two runs and advanced the potential tying run to the on-deck circle.  But Cox got out of one final jam, as a groundout ended the game.

Cox recorded her second complete-game victory of the day to improve to 2-1, allowing just two runs on eight hits.  Alex Lagesse (Beecher, Ill./Beecher) was tagged with the loss for Valpo, falling to 4-3 after giving up five earned runs in her seven innings of work.  Ichiyama and Karen Korb (Indianapolis, Ind./Lutheran) each registered two hits for the Crusaders.

Valparaiso (17-11, 3-3 Horizon) returns to league play after just one day off, traveling to Loyola on Saturday for a doubleheader at 1 p.m.  Live stats will be available for all three games of the weekend series at www.valpoathletics.com.