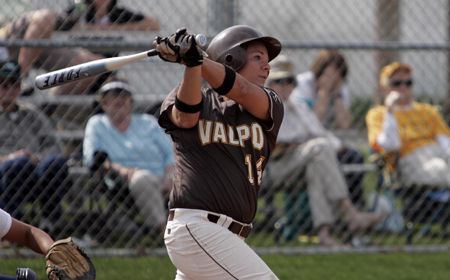 Jill Jacobson (Beecher, Ill./Beecher) scored the game-winning run on a wild pitch in the top of the 15th inning, and Stephanie Kelly (Plainfield, Ill./Plainfield) capped her complete-game win with a 1-2-3 bottom of the 15th as Valparaiso defeated Loyola, 4-3, in the longest game in team history.  The Ramblers took the nightcap from the Crusaders by a 4-1 score.

Senior Ashley Wolter (Denver, Iowa/Denver) set the Crusaders’ career home run record on Saturday, blasting a pitch over the center field fence to lead off the tenth frame.  It was Wolter’s 20th career round-tripper and the seventh of her senior campaign, third-most in a single season in Valpo history.

“It was sure quite a long day,” said Crusader head coach Randy Schneider.  “It was nice to get the win in the first game after playing so many innings.  I was a bit disappointed that we came out flat and didn’t perform in the second game; that’s something that we have to work on improving on.”

The Crusaders got on the board in the opener immediately, as Joylyn Ichiyama (Torrance, Calif./Redondo Union) knocked a two-out single up the middle to bring Karen Korb (Indianapolis, Ind./Lutheran) around to score.  Valpo added what turned out to be a key insurance run in the sixth inning when Jacobson roped a two-out single to left center field to score Kelsey Phalen (Batavia, Ill./Batavia) to push the advantage to 2-0.

Loyola took advantage of three Valpo errors in the bottom of the sixth to tie the game at two.  Ellen Kresl reached out of the leadoff spot on an error, stole second and came all the way around on a throwing error.  Later in the inning with two away, Angie Funston reached on a fielding error that allowed Lauren Arceneaux to score the tying run and set up the game for extra innings.

Neither team would threaten to push a run across until Wolter’s solo shot put the Crusaders ahead in the tenth inning.  But the Ramblers would get the run back in the bottom of the frame.  Stephanie Cihlar struck out swinging on a pitch in the dirt, but made it to first base safely with one out.  After advancing on a groundout, Cihlar moved up to third on a wild pitch and scored on an infield single by Stevie Bradich to push the game further into extra innings.

The Ramblers had the next scoring chance, putting a runner on third with one out in the 11th, but Kelly struck out Amy Solava and, following a pair of walks, induced a groundout back to the circle to end the inning.  Both teams placed runners in scoring position in each of the next three frames, with the best opportunity for either side coming in the top of the 13th.  Valpo had runners on first and second with two away when Jordan Rutkowski (Alden, N.Y./Alden) laced a single back through the middle, but Jacobson tripped rounding third on her way home with the potential go-ahead run and was thrown out at third.

Two innings later, Jacobson led off with a walk and advanced to second on a single by Sara Strickland (Phoenix, Ariz./Horizon).  A sacrifice bunt by Korb moved both runners up, and two batters later, the Ramblers elected to intentionally walk Wolter to bring up KC Boldt (Red Wing, Minn./Red Wing) with the bases loaded and two outs.  Boldt struck out swinging, but strike three was in the dirt and got between the catcher’s legs all the way to the backstop, allowing Jacobson to scamper home with the game-winning run.

Kelly put forth a stellar performance in the circle to improve to 6-4 on the year, throwing 215 pitches, including 143 strikes, over her 15 innings in the complete-game victory.  The senior also struck out a career-best 14 batters while allowing just one earned run.  Krista Crosson also went the distance for Loyola, giving up 12 hits and ten walks while striking out eight, falling to 8-5 on the season.

“Steph really pitched an excellent game,” said Schneider.  “It was fun to watch her, especially after taking a tough extra-inning loss against Wright State, turn around and pitch a gem of a game today.”

Bridget Lally hit a homer in the first inning for the Ramblers in the nightcap and also scored Loyola’s second run of the game on the back end of a double steal in the fourth.  Jenna Grim and Alexandra Trudnich each added RBI singles for the Ramblers.  Phalen connected on her third home run of the season in the top of the seventh to cut the Crusader deficit to three, but Valpo would get no closer.

Alex Lagesse (Beecher, Ill./Beecher) took the loss in the nightcap for Valpo, falling to 4-4 on the year, giving up four runs on seven hits while striking out three.  Amy Solava tossed a complete-game two hitter for Loyola (15-12, 3-2 Horizon) to improve to 6-7 on the season.

Valparaiso (18-12, 4-4 Horizon) is scheduled to complete its three-game series with the Ramblers in Chicago on Sunday afternoon at noon, a start time that has been pushed up one hour due to the threat of inclement weather.  Keep refreshing www.valpoathletics.com for the latest news on whether the game will be played.  The official Crusader site will also have a link for live stats.