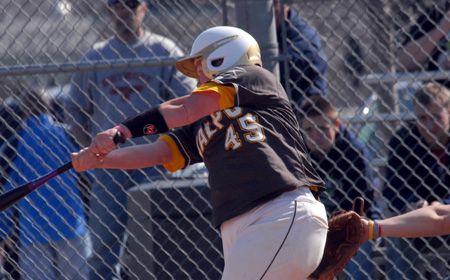 Tied heading into the bottom of the seventh, junior catcher Whitney Warner (Greenwood, Ind./Center Grove) came up with the big hit, dropping in a walk-off single to plate pinch-runner Aubrey Sundling (Huntington, Ind./Huntington North) as Valparaiso defeated Purdue in the nightcap at the Valparaiso University Softball Field on Thursday, 3-2.  The Boilermakers earned a 7-1 victory in the opener.

Freshman Joylyn Ichiyama (Torrance, Calif./Redondo Union) got the rally started in the last of the seventh, drilling a two-strike pitch to the fence in left for a double.  Sundling entered at that point for Ichiyama and alertly moved over to third base on a wild pitch.  Warner then recorded the game-winning hit, putting a 2-0 pitch into shallow left field, dropping it in between the left fielder, center fielder and shortstop.  The win improves the Crusaders’ record against Purdue since head coach Randy Schneider’s arrival to 5-4-1, as Valpo has taken four of the last six matchups.

“I was really proud of our players today for coming out and battling for a full 14 innings,” said Schneider.  “We put six freshmen out there today against a Purdue team that is primarily composed of upperclassmen, and to come out of the day with a win speaks to the mental toughness of our players on the field.  Now we need to use the momentum from this win heading into Green Bay this weekend for a big league series.”

The start of the nightcap did not reflect the pitcher’s duel that the game would eventually settle down into, as both teams plated runs in the opening frame.  Liane Horiuchi led off the game with a walk and eventually scored on an RBI single by Candace Curtis in the top of the first.  Valpo responded in the bottom half of the inning with a two-out individual effort by Jordan Rutkowski (Alden, N.Y./Alden), who tripled to right-center and then scored on a wild pitch.

Purdue immediately regained the lead in the top of the second, as with one out, Shelby Krammer drilled a triple down the right-field line.  Ashley Barr stepped up next and delivered a sacrifice fly to deep right to plate Krammer.  The Crusaders would get the run back in the bottom of the third, as Karen Korb (Indianapolis, Ind./Lutheran) led off with a triple and scored on an 0-2 single through the left side by Jill Jacobson (Beecher, Ill./Beecher).

Both pitchers then took over, as Stephanie Kelly (Plainfield, Ill./Plainfield) faced just one batter over the minimum over the final four innings, while Purdue’s Suzie Rzegocki retired ten straight Crusader hitters before Valpo put together the last at-bat heroics.  Kelly improved to 8-5 with the five-hitter, while Rzegocki fell to 18-10 on the season.

“I thought Steph put together another fantastic effort in the circle today,” said Schneider.  “She did a really good job adjusting to the Purdue hitters and really dominated the last half of the game, keeping us in a tie ballgame and giving our hitters chances to win the game.”

Purdue (22-15) got all the runs it would need in the opener in the top of the fourth, as the Boilermakers plated three unearned runs in the inning on an RBI squeeze bunt by Alicia Spack, an RBI single from Barr and an RBI double by Horiuchi.  The Crusaders got one run back in the bottom half of the frame, as Rutkowski launched her first career home run over the left-center fence, the 22nd of the year by Valpo as a team, matching a program record.  But Purdue scored four more runs in the sixth inning to put the game out of reach.

Rzegocki started the opener as well in the circle for Purdue and earned the victory, throwing five innings of two-hit ball, striking out seven.  Freshman Sam McGee (Bloomington, Minn./Jefferson) took the loss for the Crusaders, falling to 8-3 after giving up seven runs, four of which were earned, in 5.2 innings.

Valparaiso (21-16) looks to move up in the Horizon League standings this weekend, as the Crusaders travel to Wisconsin to take on Green Bay in a three-game series.  The set opens with a doubleheader on Saturday at 1 p.m.  All three games of the series will have live stats available at www.valpoathletics.com.