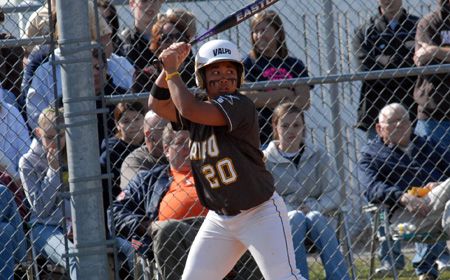 An Ashley Wolter (Denver, Iowa/Denver) grand slam in the first inning of the nightcap Thursday in Indianapolis set the tone, as Valparaiso rolled to a 12-2 victory over Butler.  The Bulldogs earned a 3-2 victory in ten innings in the day’s opener.

Four different program records fell on Thursday, including the individual record for RBIs in a single season, set by Wolter on her grand slam.  The senior has now driven in 33 runs on the season.  The Crusaders also broke team single-season marks for hits (previous record 347, now at 372), runs scored (previous record 211, now at 223) and total bases (previous record 488, now at 521).

The scoring in the nightcap started just four batters into the game, when Joylyn Ichiyama (Torrance, Calif./Redondo Union) drove in Sara Strickland (Phoenix, Ariz./Horizon) with an RBI single up the middle.  A fielding error loaded the bases with one out, and two batters later, Wolter came through with her second career grand slam.  The home run was the 21st of her career, an ongoing school record, and her eighth of the 2009 campaign, just one off of Karen Constien’s single-season standard.

Karen Korb (Indianapolis, Ind./Lutheran) got the Crusaders going in the second inning, leading off the frame with a triple.  Strickland followed with a walk, and the duo then pulled off a successful double steal to plate Korb.  Two batters later, Ichiyama reached on an error, and pinch-runner Jamie Weinburger (Eagle River, Alaska/Eagle River) stole second to put two more runners in scoring position.  After an out, Lisa DeBruzzi (Carlisle, Mass./Concord-Carlisle) stepped up and delivered a two-run single into center field to push the Valpo advantage to 8-0.

Butler scored a pair of unearned runs in the bottom of the second, but Valpo answered immediately in the third, as Korb scored on an error and Sadie Conner (Washington, Ill./Washington) delivered an RBI single to plate Jordan Rutkowski (Alden, N.Y./Alden).  The Crusaders closed out the scoring in the fourth when KC Boldt (Red Wing, Minn./Red Wing) crossed home on a wild pitch and Jill Jacobson (Beecher, Ill./Beecher) scored on a Bulldog fielding miscue.

Shaleigh Jansen (Ottawa, Ill./Ottawa Township) took advantage of the massive run support, giving up just the two unearned tallies in her three innings of work to improve to 3-3 on the season and a perfect 3-0 in Horizon League action.  Alex Lagesse (Beecher, Ill./Beecher) tossed two scoreless innings of relief to close out the game.  Breanna Fisher started and took the loss for Butler, falling to 10-13 after giving up nine runs in two innings.

The opener was a much tigher affair, as neither team would hit the scoreboard until the fourth.  Conner registered a one-out single in the top half of the inning, and pinch-runner Boldt moved up to second on a Wolter single.  Lagesse then stepped in as a pinch-hitter and drove a single into center field, scoring Boldt.

The Bulldogs responded right away, as Alyssa Coleman launched a homer to center on the first pitch of the bottom half of the fourth.  Butler then took the lead in the fifth, scoring an unearned run on an RBI groundout by Alex Boros.  But the Crusaders moved back into a tie in the top of the sixth, as Ichiyama drilled a solo homer to straightaway center for her fourth long ball of the year, tying the game at two.

Valpo had a golden opportunity to push the go-ahead run across in the top of the seventh, loading the bases with one out, but a pair of fly-outs kept the game all knotted up and sent it to extra innings.  Neither team would get another runner to third until the fateful bottom of the tenth, when Butler’s Erin Falkenberry walked to lead off the frame, moved up to second on a sacrifice bunt, advanced to third on a wild pitch, and scored on a ground ball to close out the game.

Stephanie Kelly (Plainfield, Ill./Plainfield) took the loss for the Crusaders, falling to 8-7 after giving up just two earned runs in a complete-game effort while striking out eight.  Kristen Malinkey earned the victory in relief for Butler (21-25, 10-10 Horizon), pitching 4.1 innings of shutout softball to improve to 5-5.

Valparaiso (24-19, 9-8 Horizon) closes out the regular season with a seven-game homestand, kicking off the week with a twinbill Tuesday against IPFW at the Valparaiso University Softball Field.  First pitch of game one is set for 2 p.m., and all the action can be heard live on WVUR, 95.1 FM, Valparaiso and online at www.valpoathletics.com, which will also have links for live stats.