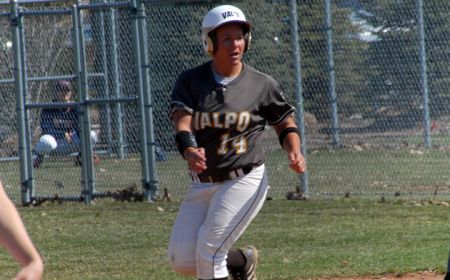 The Valparaiso softball team honored its four seniors on Senior Day following Saturday’s doubleheader against Cleveland State, but the Vikings spoiled the day, taking the opener 6-2 before winning the nightcap 10-5.

The Vikings opened the scoring in the opener in the second inning, scoring their first run without the benefit of a hit.  Mimi Mahon led off the frame getting hit by the pitch, and with two outs Danielle Young reached via error, and the Crusaders’ attempt to throw out Mahon at third base was wild, allowing her to score the first run.

Senior Stephanie Kelly (Plainfield, Ill./Plainfield) started the game for the Crusaders in the circle and did not allow a hit through the first three innings, but was roughed up by Cleveland State in the fifth.  A double steal and an RBI single plated the first two runs of the frame, and the Vikings added a sacrifice fly, an RBI groundout and also scored a run on a wild pitch after Shaleigh Jansen (Ottawa, Ill./Ottawa Township) relieved Kelly with nobody out in the inning.

Cleveland State led 6-0 after its half of the fifth, but the Crusaders quickly responded in their turn at bat.  Jill Jacobson (Beecher, Ill./Beecher) led off the inning with a single that dropped in down the right field line.  Two batters later, Sara Strickland (Phoenix, Ariz./Horizon) hit a shot to straight-away center that cleared the fence for her fourth home run of the season, cutting the Viking advantage to 6-2.  But the Crusaders could only get one hit over the final two innings as CSU held on for the win.

Kelly took the loss in the opener for Valpo, allowing four earned runs in her four-plus innings of work as she fell to 8-8 on the season.  Amanda Macenko earned the complete-game win for the Vikings, scattering seven hits to improve to 24-11.

The nightcap saw Cleveland State jump out to a quick lead in the top of the first, as Christina Stoffer scored on a wild pitch.  But Valpo answered immediately, as senior Karen Korb (Indianapolis, Ind./Lutheran) and Strickland led off with back-to-back singles.  After the duo moved up on a sacrifice bunt, Joylyn Ichiyama (Torrance, Calif./Redondo Union) hit a foul pop-up that CSU’s catcher caught.  But Korb, recognizing that nobody was covering home, tagged up and successfully scored, and the catcher’s throw sailed high, allowing Strickland to come around and score as well.

Valpo wasn’t done in its half of the first yet, as senior Ashley Wolter (Denver, Iowa/Denver) kept the inning alive with a single up the middle on a full-count pitch.  Wolter then proceeded to steal second before Sadie Conner (Washington, Ill./Washington) dropped in a two-strike double to left center, plating Wolter to put the Crusaders ahead 3-1.

But Valpo’s lead was short-lived, as the Vikings put up four runs in their half of the second, capped by a three-run homer by Stoffer.  CSU added a single run in the fourth and four more in the sixth to extend its advantage to 10-3.  Jacobson and Korb hit back-to-back solo home runs in the bottom of the seventh to cut the deficit to five runs, but Valpo was unable to draw any closer, as the Vikings completed the sweep of the twinbill.

Alex Lagesse (Beecher, Ill./Beecher) fell to 4-5 after taking the loss for Valpo in the nightcap, starting and throwing the first 1.2 innings.  Brittany Bate improved to 4-3 after throwing a complete game in the circle for Cleveland State (30-15, 18-5 Horizon).

Valparaiso (24-21, 9-10 Horizon) closes the regular season at the Valparaiso University Softball Field on Sunday with a single game at noon against Cleveland State.  The game can be heard live on WVUR, 95.1 FM Valparaiso, and online at www.valpoathletics.com, which will also have a link for live stats.  It will be Youth Day, with all youths receiving a team photo for an autograph session after the game.  It is also ‘Think Pink’ Day, as the Crusaders will honor breast cancer survivors and will be offering $10 pink t-shirts for purchase to benefit the Porter County Cancer Society.