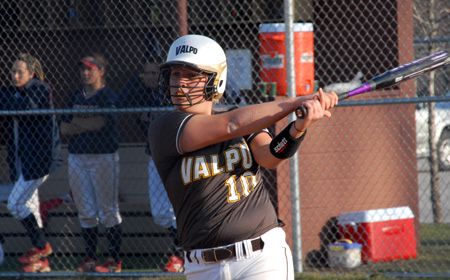 Katie Williams went 2-for-4 with a walk and a double against Loyola. (Ray Acevedo)
Valparaiso at Loyola | May 08, 2009
Related Links
Related Links

Valparaiso and Loyola engaged in a slugfest Friday evening at the Horizon League Championships, with the lead changing hands on multiple occasions, but after tying the game with two outs in the top of the seventh, the Crusaders could not come out on top, as the Ramblers ended up earning a 10-9 win in eight innings.  The loss concludes Valpo’s record-setting season at 25-24.

“With all of our injuries and all of our youth, as a coaching staff we give our players a lot of credit, because they continued to fight throughout the tournament,” said Crusader head coach Randy Schneider.  “Despite having a number of kids out of position, we felt like the players stepped up and played their hearts out.  I am happy with the way we played, but in the final innings today we just couldn’t come out on top.”

The Crusaders got on the board right away in the top of the first, taking advantage of wildness on the part of Loyola starter Amy Solava.  Karen Korb (Indianapolis, Ind./Lutheran) led off the game with a walk, moved over to second on a sacrifice bunt and advanced to third on a wild pitch.  Ashley Wolter (Denver, Iowa/Denver) then laid down a perfect squeeze bunt and Korb beat the throw to the plate for the game’s first run.

The next three Valpo hitters all walked, prompting a pitching change by the Ramblers.  Hilary Payne entered in the circle for Loyola and was rudely greeted by Whitney Warner (Greenwood, Ind./Center Grove), who laced a first-pitch single through the right side to plate Sadie Conner (Washington, Ill./Washington), giving the Crusaders a 2-0 lead.  The Ramblers quickly took the lead, however, getting an RBI single by Bridget Lally and a two-run homer by Jenna Grim in the bottom of the first to take the 3-2 advantage.

Loyola added another run to its tally in the second on a solo homer by Alexandra Trudnich, but Valpo responded immediately in the third, as Joylyn Ichiyama (Torrance, Calif./Redondo Union) launched her second homer in as many days to cut the deficit back to one run.  In the fourth, Katie Williams (Chicago, Ill./Lane Tech [Kishwaukee C.C.]) and Jill Jacobson (Beecher, Ill./Beecher) led off with back-to-back doubles to tie the game.  With two outs and Jacobson on third, Wolter stepped up and beat out an infield single to give the Crusaders the lead back at 5-4.

Valpo added to its advantage in the top of the fifth, when Ichiyama reached on a error to lead off the frame and pinch-runner Aubrey Sundling (Huntington, Ind./Huntington North) came around to score on an RBI single by Williams.  But the Ramblers answered immediately, as Lauren Arceneaux hit a leadoff home run to cut the Crusader advantage back to 6-5.

Sara Strickland (Phoenix, Ariz./Horizon) led off the top of the sixth for the Crusaders with a walk, and two batters later, Conner knocked her second home run in as many days to left-center, pushing the Valpo lead to three runs at 8-5.  But Loyola put together a big inning in the bottom half of the frame, getting a three-run homer from Kaycee Tharp to tie the score and then a solo shot by Lally to take a 9-8 lead into the final inning of regulation.

The Crusaders’ first two batters in the seventh went down in order, but Strickland worked an eight-pitch at-bat, fouling off two pitches with two strikes and eventually drawing a walk.  Wolter, in the final at-bat of her career, stepped up in the clutch, delivering a double to the wall in left field to score Strickland and knot up the score at nine apiece.  Loyola got a two-out single in the bottom half of the frame, but Stephanie Kelly (Plainfield, Ill./Plainfield) registered a strikeout to send the game into extra innings.

Ichiyama led off the top of the eighth for Valpo with a walk and moved over to third on a sacrifice bunt and a groundout.  Williams drew a walk to put two runners on with two outs, but Jacobson was caught looking to keep the Crusaders off the scoreboard.  Trudnich started the Rambler eighth with a single to left-center, and after Valpo intentionally walked the bases loaded with one out to set up the double play, Grim lined a single through the infield to plate Trudnich with the game-winning run.

Kelly took the loss for Valpo after throwing 1.2 innings of relief, falling to 8-10 on the season.  Krista Crosson earned the victory for Loyola (28-23), giving up four runs in her five innings of relief work.  Warner, Williams and Wolter each registered two hits to lead the Crusader offense, while Conner and Strickland each scored two runs and Wolter drove in three tallies.

The loss ends Valparaiso’s record-setting campaign at 25-24.  Kelly closes her career with 26 victories, fifth-most all-time at Valpo, and 320 strikeouts, fourth-most in Crusader history.  Korb ends her four years with Valpo career records in runs scored (104), stolen bases (100) and sacrifice bunts (52), and is fourth all-time with 152 career hits.  This season, she surpassed her own single-season mark for stolen bases, swiping 35 bases, and finished second in a single campaign with 44 runs scored.

“We will definitely miss our seniors, but the future looks extremely bright for us,” said Schneider.  “Katie, in particular, really stepped up and had her best game of the year today.  We had a number of freshmen and sophomores have great games hitting the ball this weekend, especially Conner and Ichiyama, and we hope that carries over into next season.”