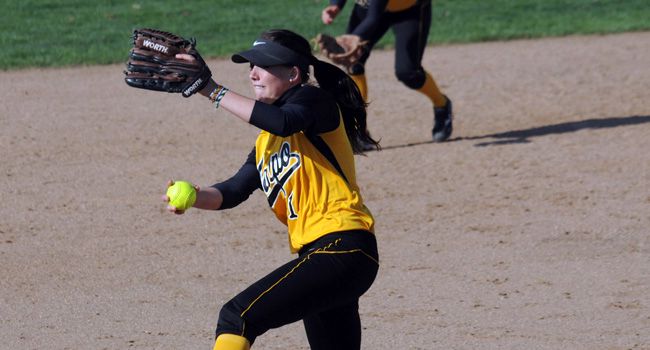 A 10-hit attack which included three home runs was more than enough for Valparaiso to advance in the 2012 Horizon League Softball Championship Friday morning at the Valparaiso University Softball Field, as the Crusaders also got a two-hit effort in the circle from Sam McGee (Bloomington, Minn./Jefferson) in a 10-0 victory in six innings over Youngstown State in an elimination game.  Valpo advances to face either Butler or Loyola in another elimination game at 4 p.m. on Friday.

McGee pitched Valpo’s second straight two-hit complete-game shutout, following in the footsteps of the effort of Alex Lagesse (Beecher, Ill./Beecher) from Thursday night against UIC.  McGee didn’t allow a baserunner until a one-out walk in the fifth inning, and later surrendered a two-out single for the first hit against her as YSU placed two runners on.  But McGee induced a pop-out to escape the mini-jam, and then pitched around a one-out single in the sixth to secure the shutout.

Meanwhile, the Crusaders’ offense was clicking on all cylinders right out of the gate Friday.  Senior Sara Strickland (Scottsdale, Ariz./Horizon) led off the bottom of the first with a single and advanced to second on an YSU error before redshirt sophomore Jessie Marinec (Alsip, Ill./Marist) knocked a single back through the middle to score Strickland.  Freshman Brittany Duncan (Fairborn, Ohio/Fairborn) then lined a shot off the YSU first baseman’s glove for a single to plate sophomore Angie Doerffler (Fort Wayne, Ind./Concordia Lutheran), and later in the frame, senior Joylyn Ichiyama-Drewry (Torrance, Calif./Redondo Union) lifted a sacrifice fly to straightaway center, scoring Marinec to give Valpo a 3-0 lead through one inning.

The Crusaders added another run in the second, as freshman Lindsey Norway (Chicago, Ill./Chicago Christian) reached to lead off the frame on an error and eventually scored on a sacrifice fly by Doerffler.  Two more runs hit the board for Valpo in the third as well.  Duncan led off with an infield single as a pop-up fell between two YSU fielders, and senior Jordan Rutkowski (Alden, N.Y./Alden) launched a no-doubt homer to left field to make it 6-0 Crusaders.

After going down 1-2-3 in both the fourth and fifth innings, Valpo closed out a run-rule win with a four-spot in the sixth.  Ichiyama-Drewry led off the frame with a line drive down the left-field line that barely cleared the wall for a solo homer, pushing the lead to 7-0.  Back-to-back singles by senior Kelsey Phalen (Batavia, Ill./Batavia) and Norway set the stage for sophomore Amanda Wisniewski (Lake in the Hills, Ill./Huntley), who cracked a three-run homer to center field to close the ten-run win.

McGee pushed her record to 15-5 on the season with the win, while YSU starter Kayla Haslett was charged with the loss, falling to 8-8 after failing to retire any of the five hitters she faced.  Eight of Valpo’s nine batters combined for the Crusaders’ 10 hits, led by two apiece from Duncan and Wisniewski.  All nine Crusaders in the order crossed the plate as well, with Norway scoring a pair of runs.

Valparaiso (39-17) will face the loser of the 1:30 p.m. Butler-Loyola game at 4 p.m. in an elimination game to determine who advances to Championship Saturday.  Live stats and live video will be available through www.valpoathletics.com.