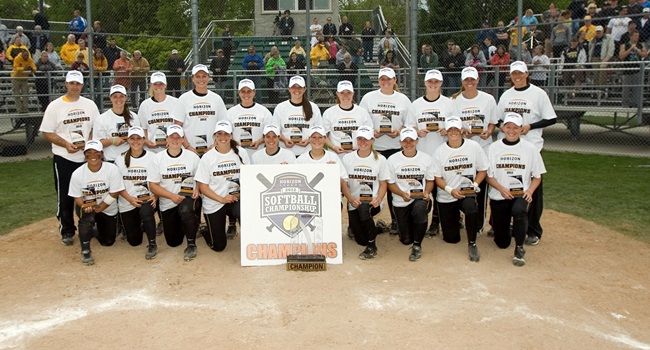 The Valparaiso softball team will be going to the NCAA Tournament for the first time in program history after winning a pair of games over Loyola on its home field Saturday afternoon to capture the 2012 Horizon League Championship, both coming by 2-1 scores and both thanks to walk-off game-winning hits by tournament MVP Angie Doerffler (Fort Wayne, Ind./Concordia Lutheran).

“You hope that with the work you put into the regular season and the months of practice throughout the year that you're prepared for this opportunity when it comes,” said head coach Jordan Stevens. “It's just a testament to our players, the way these last three games were played, that we were able to stick with it and not give in. After we dropped our first game, our team knew that we just had to do whatever it took to win the next game, and that's what we did.”

Doerffler was joined on the All-Tournament Team by four teammates: Alex Lagesse (Beecher, Ill./Beecher), Jordan Rutkowski (Alden, N.Y./Alden), Sara Strickland (Scottsdale, Ariz./Horizon) and Amanda Wisniewski (Lake in the Hills, Ill./Huntley). Rutkowski was named the Batter of the Championship after hitting .600 (9-for-15) with three doubles, a home run and five RBIs over Valpo's six tournament games, while Joylyn Ichiyama-Drewry (Torrance, Calif./Redondo Union) was tabbed the Defensive Player of the Championship after tallying eight putouts and 18 assists from her spot at third base.

“What a heck of a day and a heck of a tournament for her,” Stevens said of Doerffler. “Today was just a remarkable performance. She had great swings all day long, and I'm happy for her that they ended up in three big hits which turned around the day for us.”

Valpo, which had already won three consecutive games after losing its tournament opener to advance to championship Saturday, found itself needing to win a pair of games to claim the tournament crown, while Loyola needed just one victory to earn the title. The opener turned out to be much like a pair of regular season pitcher's duels between Lagesse and Rambler starter Brittany Gardner. The Crusaders got the first threat of the game thanks to a leadoff double in the bottom of the second by Rutkowski, but after she was sacrificed over to third with one out, a pop-up and a strikeout ended the frame.

Loyola would crack the scoreboard first in the top of the third, as Olivia Bell picked up a leadoff infield single and scored two batters later on a double to the left-center gap by Brooke Andresen. Valpo looked to respond in the bottom half of the inning, but after Strickland reached on a one-out walk, she was called out for leaving early on what wound have been a single to put runners on the corners.

Neither side would even be able to advance a runner into scoring position over the next two and a half innings, as the Ramblers maintained their 1-0 lead into the sixth. But Doerffler stepped in as the leadoff hitter in the bottom of the sixth, and after taking a first-pitch ball, drilled the second pitch she saw down the left-field line over the fence for what was at that point the biggest hit of her collegiate career – her first career home run to tie the game at one apiece. Valpo continued to threaten to take the lead later in the frame, as Brittany Duncan (Fairborn, Ohio/Fairborn) singled with one out and then a two-out error by the Ramblers put two runners in scoring position, but a groundout kept the game tied into the seventh.

Both teams earned a two-out baserunner in the final inning of regulation, but neither was able to advance into scoring position as the game advanced into extra innings, Valpo's second straight extra-inning affair. Lagesse set down the Ramblers 1-2-3 in the eighth, and the Crusaders then had a golden opportunity to earn the walk-off win in the bottom half of the frame. Duncan reached second on a one-out error, and pinch-runner Amanda Korb (Indianapolis, Ind./Lutheran) was sent home by Stevens on a hard single into center by Rutkowski. But a strong throw by Andresen in center to the plate cut down Korb at the plate, and the game would move into the ninth inning.

Lagesse pitched around a one-out single in the ninth, and Valpo would then earn the walk-off win in the bottom half of the frame. Lindsey Norway (Chicago, Ill./Chicago Christian) sent a single through the right side of the infield with one out to get the rally started, and Wisniewski followed with a perfect bunt single to the right of the pitcher's circle that was unable to be corralled by Gardner to put two on with one out. After a fly-out, Doerffler came up and drove a 2-1 pitch to the wall in left-center, easily enough for the walk-off single as Norway crossed the plate to give Valpo the victory and force a winner-take-all game.

Both pitchers went the distance in the opener, as Lagesse earned the win, scattering seven hits and allowing just one walk while striking out five. Gardner took the loss for the Ramblers, falling to 18-10. Doerffler went 3-for-4 in the opener, while Rutkowski also picked up a pair of base knocks.

With both starting pitchers from the first game having thrown nine innings already, both coaches opted to select different starting pitchers for the winner-take-all Game 11 of the Championship. For the Crusaders, that meant Sam McGee (Bloomington, Minn./Jefferson) got the nod in the circle for the second time in the tournament, having previously eliminated Youngstown State with a two-hit shutout, while for Loyola, Amanda Ciran saw her first action at pitcher of the tournament.

Despite the change in starters, however, the theme of the day remained the same, as runs remained at a premium. Valpo had the better chances early, as McGee set the first nine Ramblers she faced down in order. The Crusaders got a leadoff single in the first from Strickland, and after a pair of fielder's choices, Duncan was hit by a pitch to put two on with two away. But a pop-up ended that early threat. Then, the third inning saw Valpo place the first two runners on as Wisniewski was hit by a pitch and advanced to second on a Loyola error on a grounder from Strickland. But another grounder would erase the lead runner at third, and a pair of fly-outs kept the game scoreless.

Loyola had a golden opportunity to break the seal on the scoreboard in the top of the fourth following a leadoff double by Andresen, its first baserunner of the game. A sacrifice bunt moved her over to third with one out, and Annie Korth then reached on a fielder's choice, as her grounder back to the circle was bobbled momentarily by McGee, who then took time to make sure Andresen held at third before realizing she had no play at first. Korth would steal second in the next at-bat, as the Crusaders opted to keep Andresen at third, but McGee then secured a pop-up back to the circle and set down Lauren Arceneaux swinging to keep the Ramblers off the board.

The teams combined for three straight 1-2-3 half-innings before a two-out single by Loyola in the sixth, but McGee induced a flyout from Korth to keep the shutout alive. Then, the Crusaders finally cracked the board in the bottom of the sixth. Doerffler watched six pitches go by to draw a leadoff walk, and pinch-runner Hayley Bridwell (Lemont, Ill./Lemont) moved up to second two batters later on a four-pitch walk to Duncan. Rutkowski then took the first pitch she saw and lined it down the left-field line for a one-out double, plating Bridwell with the game's first run. Valpo's attempt to add insurance runs was thwarted through, as Ciran got a pop-up and a groundball to keep it a one-run contest.

The lack of insurance runs came back to bite Valpo in the top of the seventh, as after McGee got the first out, Arceneaux drove a triple to right-center field, sliding in to third just ahead of the ball's arrival on the relay. Lauren Zaworski then fought off one 1-2 pitch before lining the next into right for a solid single, bringing home Arceneaux with the tying tally. Lagesse entered in relief for McGee, inducing a fielder's choice slap to short where the Crusaders erased the lead runner before striking out Bell to keep the game tied into the bottom of the seventh.

After a first-pitch pop-up opened the decisive half-inning, Wisniewski stood at the plate and watched five pitches go by, all but one of them balls for a one-out walk to put the winning run on base. After a foul-out put the Crusaders one out away from having to go to extra innings, Doerffler stepped in and matched her first-game heroics, drilling the first pitch she saw to the gap in right-center for the championship-winning double. Wisniewski crossed the plate standing up and joined the dogpile on Doerffler at the third-base bag as Valpo celebrated its first-ever Horizon League championship.

McGee went a strong 6.1 innings in the Crusaders' win, giving up just four hits and walking none while striking out three. Lagesse recorded the final two outs for her second win of the day, improving to 22-9 on the season. Ciran took the complete-game loss for Loyola (26-23), falling to 5-13 on the year. The Valpo offense tallied just three hits in the decisive game, but two of those were run-scoring blows from Rutkowski and Doerffler.

“Alex, again, continued to do what she's done throughout the whole tournament,” said Stevens. “She's been a horse out there for us. Then Sam was ready and determined for that second game. She knew if we got game one, the final game was going to be hers, and she was well prepared. Two performances like that on a championship game is just two seniors stepping up big time.”

“I'm just really proud of our senior class,” continued Stevens on his seven seniors. “I'm proud of the way they approach the game and lead our team, both on and off the field. I know this meant a lot to them to finally come out with something after their four years of hard work.”

Valparaiso (42-17) will now await word of where it heads for its first-ever appearance in the NCAA Softball Tournament. The selection show will be televised live on ESPNU at 9 p.m. CDT Sunday evening, with the regional rounds set for next weekend.