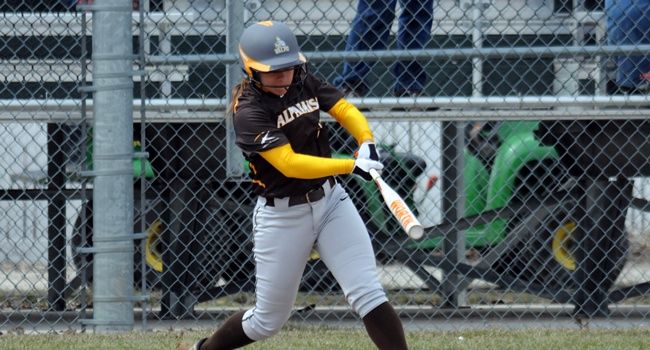 The Valparaiso softball team carried a 2-1 lead into the fifth inning of Sunday’s Horizon League series finale at Loyola, but five unanswered runs sent the Crusaders to a 6-2 defeat.

“We didn’t play well enough to win today, and Loyola played very well,” said Crusader head coach Jordan Stevens.  “From every experience, you can choose whether you want to take something out of it or not.  Hopefully we decide to take something from this weekend, and use it as we continue to strive towards always playing at the highest level.”

The Crusaders started the scoring immediately in the top of the first on Sunday.  Freshman Kaitlyn Ranieri (Schererville, Ind./Lake Central) worked a 10-pitch walk to lead off the game and moved up to second base on a groundout.  Two batters later, sophomore Brittany Duncan (Fairborn, Ohio/Fairborn) lined a single back through the middle to plate Ranieri and give Valpo a 1-0 lead.

Loyola answered with a run in its half of the first, as Brooke Andresen led off the Rambler turn at the plate with a bunt single before eventually scoring on the third of three straight walks.  Valpo re-claimed the advantage in the top of the second, courtesy of sophomore Lindsey Norway (Chicago, Ill./Chicago Christian), who connected on a solo homer to straightaway center field to make it 2-1.

Loyola threatened to tie the game in the third, loading the bases with two outs, but Crusader starter Amanda Bolton (Scottsdale, Ariz./Horizon [Arizona]) induced a grounder to escape the jam unscathed.  The Ramblers then loaded the bases with one away in the fifth and tied the game on a sacrifice fly from Katy LaCivita, but Taylor Weissenhofer (Homer Glen, Ill./Lockport Township) registered a strikeout to keep the game all square at 2-2.

The Crusaders were unable to push a run across following a leadoff walk in the sixth, and Loyola would plate the game’s decisive runs in the bottom of the sixth.  An error and a single put two runners on with nobody out, and following a strikeout, Lauren Moore tomahawked an RBI single to left-center before Jessica Balzano hit a three-run homer for the game’s final runs.

Weissenhofer took the loss in relief, falling to 10-8 on the year despite registering four of her five outs via strikeout.  Bolton worked the first 4.1 innings, giving up just two runs while striking out three.  Brittany Gardner earned her second complete-game win of the series for Loyola (16-12, 4-2 Horizon), improving to 8-5 on the season.

Valparaiso (20-15, 5-4 Horizon) steps out of league play on Tuesday afternoon for a home doubleheader against Bowling Green, slated for a 3 p.m. first pitch.