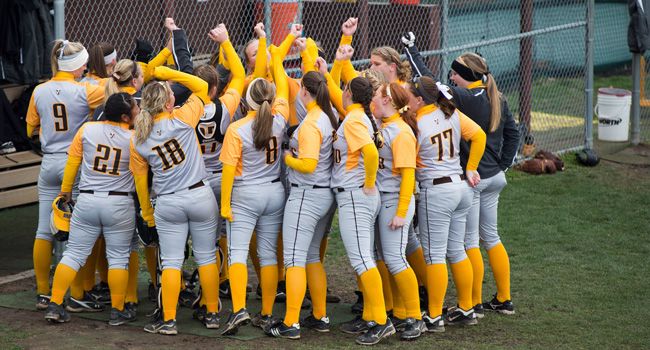 Next Up in Crusader Softball: The Valparaiso softball team continues a stretch of 11 consecutive games away from home this week with four more games. Valpo will travel to Purdue for a single game Wednesday afternoon before playing a key three-game Horizon League series at Cleveland State this weekend.

Previously: The Crusaders had their mid-week game at Notre Dame canceled and then took two out of three from Detroit in weekend play. Valpo took the series opener (12-1) and finale (17-0), but dropped the middle game to the Titans (9-0). All three games ended early via run rule.

Following the Crusaders: Live stats for each of this week’s four games will be available through ValpoAthletics.com. In addtion, there will be live video via the Horizon League Network for all three games of the series against Cleveland State.

Head Coach Jordan Stevens: Jordan Stevens is in his third season at the helm of the Valparaiso University softball program in 2013, having won 99 games as the Crusader head coach. Stevens guided the Crusaders to 42 victories in his second season in charge in 2012, surpassing by seven wins the program's previous single-season wins record. Along the way, Valpo claimed the Horizon League regular season and tournament championships, advancing to the NCAA Tournament for the first time in program history.

Series Notes: Purdue - The Crusaders are 8-25-2 all-time against the Boilermakers, with Purdue earning a 4-3 win in the most recent meeting on March 29, 2012. This marks the first meeting in West Lafayette since the Boilermakers swept a doubleheader on April 15, 2010.
Cleveland State - Valpo is 11-15 all-time against the Vikings, including a 7-8 mark since joining the Horizon League. But the Crusaders have won six straight in the series, including a series sweep by scores of 7-0, 6-4 and 13-1 in Cleveland last season. Brittany Duncan led Valpo in that sweep, going 6-for-9 with seven RBIs.

The League Race: The Crusaders can clinch their fifth winning record in league play in six seasons as a Horizon League member this weekend with a sweep of the series at Cleveland State. Currently in a pack of teams from third through seventh, Valpo cannot quite clinch a spot in the league tournament (top six teams) without any help, but could clinch with at least two wins plus some help with teams lower in the standings losing.

Big Win: Valpo closed out its series against Detroit with a bang, unloading on the Titans for a 17-0 victory on Sunday. The Crusaders’ 17 runs matched the third-most in a single game in program history and was just one run shy of the single-game record. In addition, Valpo’s 12-run first inning ties the highest single-inning output known in program history. Individually, Kaitlyn Ranieri became the first Crusader since at least 1999 to draw four walks in a single game as Valpo totaled nine hits, seven walks and four hit batsmen as a team.

Big Bat for Bouchard: Freshman catcher Janelle Bouchard earned her first career Player of the Week honor from the Horizon League office in a big way last weekend, going 6-for-9 in the three-game series at Detroit with four home runs and 11 RBIs. Bouchard started the weekend with a grand slam in the first inning of the series opener against the Titans and added a solo homer in the sixth for her first career multi-homer game. Then, in the series finale, Bouchard launched a two-run homer in the opening inning and, after the order batted around, came up with the bases loaded and made it a two-homer inning with her second grand slam of the series. Bouchard now leads the Horizon League with 40 RBIs.

League Honorees: Bouchard’s honor marked the seventh different weekly award a Crusader has won this season from the Horizon League office, spread out among six players. Joylyn Ichiyama, Brittany Duncan and Lindsey Norway have all earned Player of the Week nods, while Sierra Pico (2x) and Taylor Weissenhofer have been tabbed Pitcher of the Week.

Weissenhofer Deals: Freshman Taylor Weissenhofer continued her strong rookie season in the circle last weekend, earning a pair of wins. Weissenhofer gave up just one run and five hits in 11 innings of work and struck out 16 batters. She now has 12 wins on the season to go with 155 strikeouts, already third-most in a single season in Crusader history. Weissenhofer ranks sixth nationally with five saves, 15th in K/7 innings (9.4) and 25th in fewest hits/7 innings (4.63).