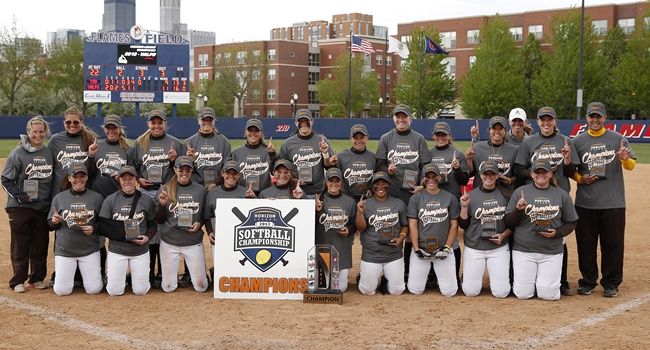 Quite simply, the Valparaiso softball team would not be denied its second straight Horizon League Championship, completing a five-game run of victories with a pair of wins on Saturday over Youngstown State, 2-1 and 11-9, to claim the league title for a second consecutive season.  With the tournament crown, the Crusaders will represent the Horizon League in the NCAA Tournament for the second time in as many years.

“Obviously it’s great for the players, great for the athletic department and great for our university to win this championship today,” said Crusader head coach Jordan Stevens.  “I’m just really happy for our team - the way they persevered throughout the year.  They just continued to work hard and started playing their best softball at the end of the year.”

Valpo was led throughout the tournament, and again on Saturday, by the exploits of freshman catcher Janelle Bouchard (Kennebunk, Maine/Kennebunk).  Bouchard was named the tournament’s Most Valuable Player, as well as the Batter of the Championship, after going 9-for-17 (.529) at the plate with four runs scored, four doubles, one triple, one home run and 10 RBIs over Valpo’s six games.  Bouchard’s 10 runs driven in tied the league’s tournament record, set by Loyola’s Nora Schober in 2006.

“What a great week Janelle had, especially today,” said Stevens.  “We expected that she’d be a contributor for us for sure this year, and she just came through big in a lot of key situations this week for us.  I’m happy to see all the work she’s put in this season pay off.”

Bouchard was joined by three of her fellow Crusaders on the All-Tournament Team.  Freshman Taylor Weissenhofer (Homer Glen, Ill./Lockport Township) earned Pitcher of the Championship accolades as she picked up three of Valpo’s five victories in the circle, including a four-hit performance in Saturday’s opener to help send Valpo to the winner-take-all game.

It was a long road for the Crusaders to hoe to even get to Championship Saturday in their quest to defend last season’s tournament crown, as for the second time in as many years, Valpo dropped its opening game in the tournament, falling to Youngstown State 9-1.  The Crusaders needed to win three elimination games just to reach Saturday’s action, defeating UIC 3-1, Cleveland State 4-3 (8 innings) and Wright State 10-2.  Meanwhile, the Penguins, the tournament’s sixth seed, won each of their first three games of the tournament and needed to win just once on Saturday to claim the crown.

“I think it was important (to have the experience of having to win five straight games to win the tournament) because those that went through it last year, they didn’t panic,” said Stevens.  “They went about their business like this has happened before and it’s really not a big deal - we just have to go out and play.  Having that kind of leadership on the field from those that have been there really paid off.”

With Youngstown State coming out of the winner’s bracket, Valparaiso, the tournament’s third seed, hit as the visiting team in the day’s first game as the Crusaders attempted to force the winner-take-all game, and took full advantage of their first turn at bat.  Freshman Kaitlyn Ranieri (Schererville, Ind./Lake Central) got Valpo started with a leadoff single.  Two batters later, Ichiyama stepped up and hit her second home run of the tournament off YSU starter Casey Crozier, taking a 2-1 pitch deep over the right-field wall to stake Valpo to an early 2-0 lead.

That would be all the runs the Crusaders would put on the board in the opener, as Valpo mounted only two other major scoring threats.  A one-out double from Bouchard was followed by a single from sophomore Tarah McShane (Streamwood, Ill./St. Edward Central Catholic) in the top of the fourth to put runners on the corners with one away, but the next two Crusaders went down in order.  Then, in the seventh, pinch-runner Hayley Bridwell (Lemont, Ill./Lemont) was on second with one out and attempted to score on a single into right by Ranieri, but a perfect throw by YSU’s Caroline Krombach nailed Bridwell at the plate.

But two runs would be enough for Weissenhofer in the circle, as she was on her game in the opener.  The freshman set down the first nine batters she faced in order, and then stranded a runner at second after a leadoff single in the fourth.  The Penguins cut Valpo’s lead in half as Samantha Snodgrass connected for a line-drive homer with two outs in the sixth, but Weissenhofer got out of the inning by inducing a fly out and then pitched around a one-out single in the seventh, thanks in large part to a sliding catch in center field from Kimberlin Wallace (Newton, Ill./Community [Lake Land C.C.]) to give the Crusaders one more game.

Weissenhofer earned the win in the opener with the complete-game four-hitter, while Crozier took the loss for Youngstown State.  Ranieri went 2-for-3 in the day’s first game, and Bouchard reached twice as well as Valpo totaled seven base hits.

Both teams sent the same starting pitcher to the circle in the winner-take-all championship game, but the game proved to be a completely different type of contest.  The scoring started early, as Valpo struck in its first at-bat for the second straight game.  Batting as the home team in the tournament’s final game, Ranieri led off with a walk and Ichiyama reached on an error.  After both runners moved up 60 feet into scoring position with two outs, Bouchard narrowly missed a three-run homer, driving a ball off the top of the center-field wall to score both Crusaders and give Valpo an early 2-0 lead.

The Penguins showed immediately that this game would be unlike the first, tying the game with single runs in their next two trips to the plate.  Sarah Ingalls lined a two-out double to the wall in right to score Miranda Castiglione in the second inning, and then in the third, with Haley Knight on second, Vicky Rumph hit a fly ball to deep center that, with the aid of the sun and the wind, fell for a triple, scoring Knight to tie the championship game at two-all.

Valpo wasted little time re-claiming the lead, however.  Ichiyama led off the bottom of the third with a two-bagger, and two batters later, Bouchard stepped up.  The freshman unleashed on a 2-1 offering for a no-doubt home run, driving it high off the scoreboard just to the left of center field to put Valpo back ahead, 4-2.

The Crusaders then exploded for a five-spot in the bottom of the fourth.  Junior Amanda Wisniewski (Skokie, Ill./Huntley) connected on a one-out double to the left-center gap, and Ranieri followed by driving a pitch to nearly the same spot, trading places with Wisniewski to make it a 5-2 Crusader lead.  After the Penguins called to the bullpen, taking out Crozier and bringing in Hana Somogyi, Wallace and Ichiyama recorded back-to-back infield singles to load the bases, still with only one away.

Redshirt junior Jessie Marinec (Alsip, Ill./Marist) stepped in with the bases loaded and grounded one to third, but the throw home was dropped by the YSU catcher on the attempted force, allowing Ranieri to score.  As the ball bounced away, Stevens sent Wallace home as well, and the catcher’s throw back to the plate went down the left-field line, allowing not only Wallace but also Ichiyama to touch home safely and push the lead to 8-2.  Marinec, who advanced all the way to third base on the play, scored on a groundout by Bouchard as the Crusaders led 9-2 through four innings.

But Youngstown State would not go down that easily.  The Penguins picked up four hits off of Weissenhofer in the fifth inning, scoring runs on a Rumph RBI double, a line-out and a Sarah Gabel home run to cut their deficit to 9-5.  Valpo added another run back to its cushion in the bottom half of the frame, as sophomore Lindsey Norway (Chicago, Ill./Chicago Christian) led off the Crusaders’ turn at bat with a single and came around to score on a YSU error.

The Penguins mounted another rally in the top of the sixth inning.  Back-to-back singles led off the inning, chasing Weissenhofer from the circle as Stevens called on fellow freshman Sierra Pico (North Las Vegas, Nev./Legacy).  But YSU chipped away at the lead, scoring one on a single from Courtney Ewing, another run on an infield single by Rumph, and two more runs on a base knock by Castiglione to close within 10-9.

“Youngstown State had a great run – they played really good softball the whole tournament, and even going back to last weekend, we knew they were on top of their game,” said Stevens.  “I’m proud of the way we didn’t buckle when they put some pressure on us late, closing to within one run.”

Following Castiglione’s base hit, the Penguins had the tying run in scoring position and the go-ahead run on base with one out, but Pico induced a ground out back to the circle for the second out.  Kelly Stowe then went after Pico’s first offering and popped it up to short, as Valpo found itself with a one-run lead, three outs from the title.

The Crusaders started off the sixth with three straight base hits, as Bouchard doubled, McShane singled and Norway drove in Bouchard with a single of her own to make it 11-9 Valpo.  Valpo left the bases loaded that inning, but Pico would make sure that did not matter in the top of the seventh.  With three outs to go for the tournament title, Pico rolled a pair of infield groundouts and then took care of business herself on the final batter as she got Knight swinging on a 2-2 pitch low and out of the zone to end the tournament and give the Crusaders the title.  The strikeout set off the celebration near home plate, with everyone converging on the duo of Bouchard and Pico to celebrate the championship.

Valpo totaled a season-best 16 hits in the championship game victory, led by three hits apiece from Bouchard, Ichiyama and Norway.  Doerffler and Wisniewski added a pair of base hits each as well.  Of Valpo’s 16 hits, six were doubles, setting a new Horizon League Championship record for most two-baggers in a single game.

Youngstown State (19-27) had 13 hits in the losing effort, led by three hits from Rumph.  Crozier took the loss for YSU, falling to 16-10 to end the season after pitching the first 3.1 innings.  Weissenhofer pitched into the sixth inning for the Crusaders to pick up her second win of the day, improving to 20-11 on the year.

Valparaiso (34-25) will now await the NCAA Selection Show, broadcast live on ESPNU Sunday evening at 9 p.m., to learn its destination for the 2013 NCAA Tournament.

“I think being (to the NCAA Tournament) before gives us some confidence that we’re right there with the teams we going to play against,” said Stevens.  “We just need to go in and not make it bigger than it is.  We need to recognize it’s just another softball game on another field, and try to carry with us the momentum from this week’s tournament.”