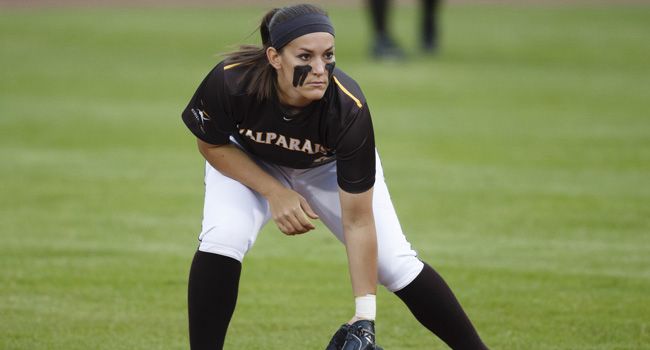 The Valparaiso softball team played a pair of one-run games on Sunday at the Wildcat Invitational in Tucson, Ariz., falling 1-0 to UT-Arlington before a walk-off home run from senior Amanda Wisniewski (Skokie, Ill./Huntley) gave the Crusaders a 7-6 win over Longwood.

Valpo put two on with two outs in the third inning looking to crack the scoreboard first in the opener against UT-Arlington, but couldn’t push a run across.  UT-Arlington then scored its lone run in the bottom of the third, as a leadoff bunt single came around to score on an RBI single from Britnea Barilli.  The Crusaders’ best threat from that point came in the seventh, as junior Tarah McShane (Streamwood, Ill./St. Edward Central Catholic) laced a two-out triple, but she would be stranded at third base as the Mavs completed the shutout.

Fifth-year senior Jessie Marinec (Alsip, Ill./Marist) was the only other Crusader to pick up a hit against UTA, as the Crusaders were limited to two hits.  Sophomore Sierra Pico (Las Vegas, Nev./Legacy) took the tough-luck loss for Valpo despite giving up just the one run, while Callie Collins improved to 6-4 with the complete-game shutout for UT-Arlington (11-8).

The Crusaders had no such problems pushing runs across the plate against Longwood, plating four in the first inning.  After the first two batters made outs, sophomore Kaitlyn Ranieri (Schererville, Ind./Lake Central) and freshman Sam Stewart (Frankfort, Ill./Lincoln-Way West) drew back-to-back walks, and then an RBI double from sophomore Janelle Bouchard (Kennebunk, Maine/Kennebunk) drove in Ranieri.  Mcshane followed with her second home run of the season, this one a three-run round-tripper to make it 4-0 Valpo.

Longwood cut its deficit in half with a two-run homer in the second, but the Crusaders pushed the lead back to four runs as freshman Taylor Lawson (Tucson, Ariz./Sahuaro) and senior Angie Doerffler (Fort Wayne, Ind./Concordia Lutheran) scored on an error in the fourth inning.  Back-to-back homers from Longwood made it a 6-4 game in the fifth, and the Lancers tied things up with two outs in the seventh with a two-run homer.  But with one out in the bottom of the seventh, Wisniewski drove a 1-0 pitch over the right-field wall for her fourth round-tripper of the season, snapping an eight-game losing streak.

Pico earned the win for Valpo by registering the last out of the seventh inning, improving to 1-5 on the season.  Libby Morris took the loss for Longwood (6-3), falling to 2-2 on the year.  Bouchard picked up two hits against the Lancers, while Ranieri tallied a hit in addition to her walk.

Valparaiso (3-10) returns to action next weekend at the Springhill Suites Invitational in Boise, Idaho, hosted by Boise State.  The tournament begins Friday against Weber State.