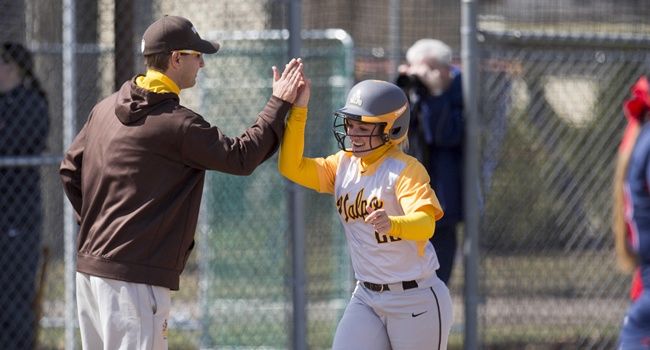 The Valparaiso softball team got a pair of shutout efforts in the circle Saturday from sophomores Taylor Weissenhofer (Orland Park, Ill./Lockport Township) and Sierra Pico (Las Vegas, Nev./Legacy) as the Crusaders swept a Horizon League home doubleheader from Detroit by final scores of 6-0 and 9-0.

Weissenhofer went the distance in the opener, giving up just two hits while striking out 10 Titan batters in improving to 7-5 on the season.  Then, in the nightcap, Pico tossed a two-hitter of her own in the run-rule victory, also walking just one batter while striking out six to earn her second win of the year.  The pair of pitchers combined to allow just one Detroit baserunner past second base on the day.

“Both Taylor and Sierra had really good command today – I really liked their presence in the circle,” said Crusader head coach Jordan Stevens.  “It was good to see everybody behind them in the field step up and help out as well to help out, in those innings when Detroit did get runners on base.”

Valpo got the only runs it would need to win the opener in the bottom of the third inning.  Senior Angie Doerffler (Fort Wayne, Ind./Concordia Lutheran) knocked a one-out single into center, and two batters later, sophomore Kaitlyn Ranieri (Schererville, Ind./Lake Central) launched a two-run homer over the right-center field fence to make it 2-0 Crusaders.  For Ranieri, it was her fourth round-tripper in an eight-game stretch.

The Crusaders added insurance in the bottom of the fourth, as senior Amanda Wisniewski (Skokie, Ill./Huntley) led off with a sun-aided double to center and eventually came around to score on a single from fifth-year senior Jessie Marinec (Alsip, Ill./Marist).  Valpo closed out the scoring in the fifth with three runs.  An infield single off the bat of Jorgi Calombaris (Frankfort, Ill./Lincoln-Way East) plated fellow rookie Taylor Lawson (Tucson, Ariz./Sahuaro), and later in the frame, sophomore Janelle Bouchard (Kennebunk, Maine/Kennebunk) connected on a two-run single through the left side to make it 6-0 Crusaders.

Kat Hoffman took the loss for Detroit, falling to 2-10 as she pitched into the fifth inning.  Ranieri led the way for the Crusader offense in the opener with her first career four-hit game, going a perfect 4-for-4 at the plate, while Bouchard and Lawson each reached base twice as well.

It would take Valpo just three batters to claim the lead in the nightcap Saturday.  Fresh off her four-hit effort in the opener, Ranieri was hit by a pitch to lead off the bottom of the first.  Two batters later, Wisniewski connected on her Horizon League-best eighth home run of the season to give the Crusaders the early 2-0 lead.

Valpo followed by batting around in the second, putting five runs on the board.  Ranieri drove in a run courtesy of a groundout, and Calombaris followed with an RBI single.  The Crusaders then successfully pulled off a double steal, with Lawson sliding into home around the tag to make it 5-0.

Two batters later, junior Tarah McShane (Streamwood, Ill./St. Edward Central Catholic) dropped a single into shallow right-center to plate Calombaris, and Marinec later brought home McShane with an RBI base hit of her own.  Valpo closed the scoring to lead off the third, as Doerffler, Lawson and Ranieri picked up three straight doubles, the last scoring both runners in front of her.

Julia Maksym pitched into the third for Detroit (3-23, 0-2 Horizon) in the nightcap, taking the loss to fall to 1-8 on the season.  Both Doerffler and Lawson went 2-for-2 with two runs scored out of the bottom two spots in the batting order as all nine Crusaders tallied base hits in Valpo’s 11-hit effort.  Ranieri tallied three RBIs as well in the win.

“I thought our approach as a team was very good in the second game,” said Stevens.  “We ultimately got the win in the first game, but it was nice to see a complete game put together by everybody out on the field in the second game.  We had some good individual performances in the opener – Taylor did a nice job, and we had a few offensive performances that were very good.  But in game two, everybody played really well and it was a full team effort in that win.”

Valparaiso (10-23, 4-2 Horizon) looks to complete the series sweep on Sunday at noon against the Titans.  The game can be seen live on the Horizon League Network and heard live on WVUR, 95.1 FM, Valparaiso.  Links for the live video and audio, as well as live stats, will be available at ValpoAthletics.com.