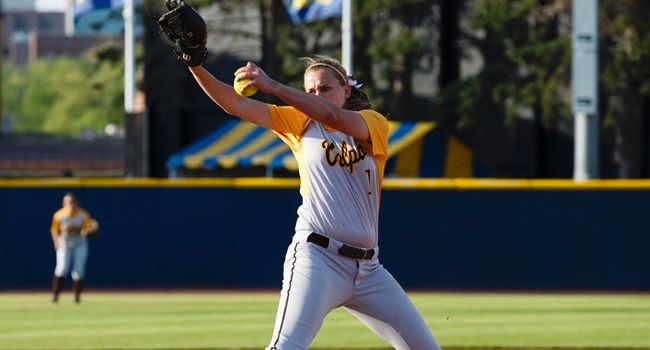 Making her second start of the day, Valparaiso sophomore Taylor Weissenhofer (Orland Park, Ill./Lockport Township) twirled a three-hit shutout as the third-seeded Crusaders defeated second-seeded Wright State 4-0 Wednesday afternoon at the 2014 Horizon League Championship.  With the win, Valpo advances in the winner’s bracket and will play next on Friday morning at 10 a.m. CT.

Weissenhofer, who went five innings earlier in the day in Valpo’s win over UIC, gave up just three singles to the Raiders and didn’t walk a batter, facing a three-ball count just once on the afternoon.  Economical with her pitch count, it took the sophomore just 89 pitches – 60 of which were strikes – to earn the complete-game win and improve to 15-11 on the season.

The Raiders strung together a pair of hits in the bottom of the second for the game’s first solid scoring chance, the second of which put runners on the corners with one out.  But good defense from the Crusaders kept WSU off the board, as with the Raiders attempting a double steal to plate the runner from third, second baseman Amanda Wisniewski (Skokie, Ill./Huntley) cut the throw down to second and fired back home to catcher Janelle Bouchard (Kennebunk, Maine/Kennebunk), who had the plate blocked and applied the tag to Rachael Oakley to keep the game scoreless.

From that point on, Weissenhofer was nearly perfect, surrendering just a two-out single in the sixth over the final five innings.  Valpo would get the only run it would need in the top of the fourth.  Wisniewski led off the fourth with a check-swing blooper which fell into shallow right field for a leadoff single.  After moving over to second on a groundout, the senior came home standing up as Bouchard drilled a run-scoring double to the fence in left to give Valpo a 1-0 lead.

The Crusaders added a trio of insurance runs in the sixth, in part thanks to smart baserunning.  Junior Tarah McShane (Streamwood, Ill./St. Edward Central Catholic) reached on a leadoff error, and pinch-runner Kimberlin Wallace (Newton, Ill./Community [Lake Land C.C.]) moved over to third on Bouchard’s second double of the game.

Fifth-year senior Jessie Marinec (Alsip, Ill./Marist) followed with a single the other way to plate Wallace, and Marinec then got caught in a rundown between first and second, distracting the defense just long enough for Bouchard to scoot home and make it 3-0 Valpo.  Marinec later advanced to third on a wild pitch and scored on a groundout from Angie Doerffler (Fort Wayne, Ind./Concordia Lutheran) to cap the scoring.

Krystian DeWitt went the distance in the circle for Wright State (18-31), falling to 11-13 on the year.  Bouchard and Marinec each had a pair of hits, while the latter also drew a walk to reach in all three of her plate appearances.

Valparaiso (23-32) will have Thursday off and return to the field Friday at 10 a.m. CT to face top-seeded Green Bay for the right to advance to Championship Saturday.  Links for live video through the Horizon League Network, as well as live stats, will be available at ValpoAthletics.com.