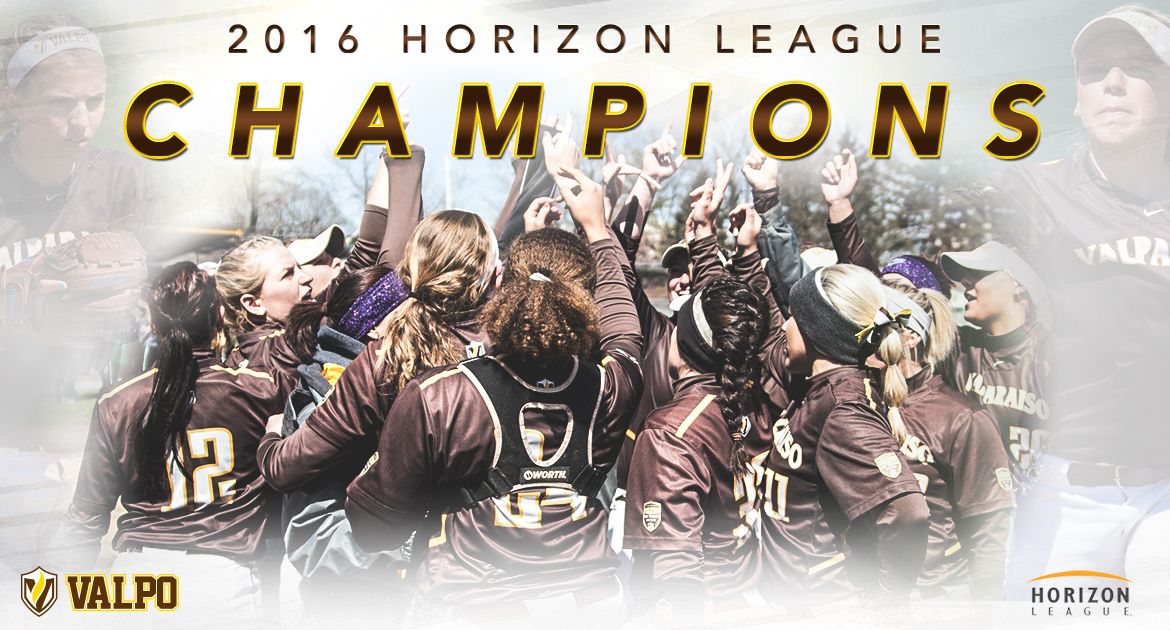 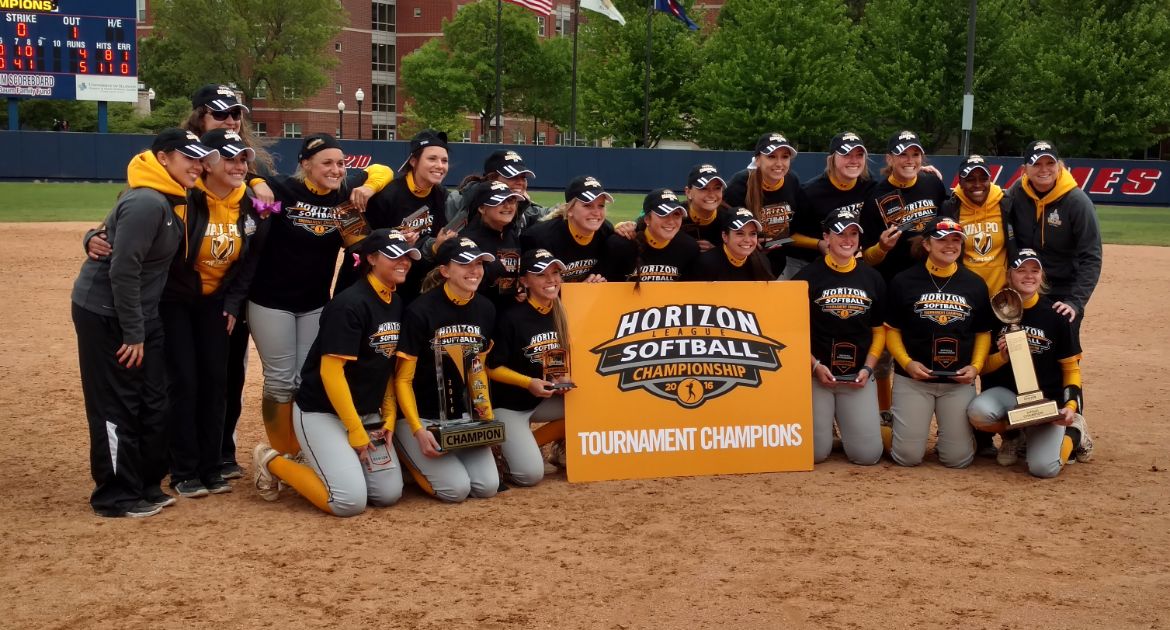 Incredible. Improbable. Unbelievable. Inconceivable. Whatever adjective you may have chosen to describe the Valparaiso University softball team’s run to the Horizon League Championship title game, the term could have doubled as a description of Saturday’s championship game against Wright State, as the Crusaders rallied for four runs in the bottom of the seventh inning before Stephanie Moreno (Murrieta, Calif./Murrieta Valley) delivered the walk-off double in the eighth to send the Crusaders back to Valpo as Horizon League champions. With the tournament title, the Crusaders earn the league’s automatic berth into the 2016 NCAA Tournament.

Junior Sam Stewart (Frankfort, Ill./Lincoln-Way East) earned Tournament MVP honors after going 5-for-12 with six RBIs at the plate and catching all 29 innings defensively. Sophomore Lanie Callaghan (Elburn, Ill./Kaneland) was named the tournament’s Batting Champion as she hit .455 (5-for-11) with four runs scored and seven RBIs, while senior Taylor Weissenhofer (Orland Park, Ill./Lockport Township) was tabbed Pitcher of the Championship for the second time in her career, as she recorded all but two outs in the circle over Valpo’s four wins while posting a 2.47 ERA and 25 strikeouts. Freshman Carly Trepanier (Manteno, Ill./Manteno) joined the aforementioned trio on the All-Tournament Team.

“I’m so proud of Sam for being named tournament MVP, because she was tremendous this week for us,” said Crusader head coach Kate Stake. “Obviously offensively, she came up with a number of clutch hits, but her defensive impact shouldn’t be overlooked. She was a rock behind the plate for us all week, and that part of her game was just as instrumental in winning the championship as her bat was.”

The tournament, for all intents and purposes, had started for Valpo with two weekends left in the regular season. The Crusaders, at that point, were on the outside looking in to the tournament field – needing to surpass two teams in the Horizon League standings. Fast-forward to the final day of the regular season, and Valpo still needed to win once more just to secure its berth into the league tournament.

So when the Crusaders stepped to the plate in the bottom of the seventh inning, trailing 4-0 to Wright State and facing the possibility of a winner-take-all title game to follow, the team stepped up to bat taking strength from the previous three weeks – a stretch which included three straight wins over the previous three days to advance to Championship Saturday out of the winner’s bracket.

Junior Jorgi Calombaris (Frankfort, Ill./Lincoln-Way East) took advantage of a Wright State miscue to reach base to lead off the inning, as an errant throw from the third baseman put her on. Moreno followed by knocking a first-pitch single through the left side to put two on with nobody out.

Two batters later, Callaghan – who delivered hit after hit over the course of the tournament out of the nine-hole in the Crusader order – came up big yet again, lining a single into right-center to score Calombaris, move Moreno to third and bring the potential tying run to the plate. At the top of the lineup, Trepanier knocked a grounder into the 3-4 hole, one which the Raider second baseman dove to glove but had no play at any base, for an infield single, plating Moreno to cut the deficit to 4-2.

Junior Taylor Lawson (Tucson, Ariz./Sahuaro), while she didn’t reach base, had an at-bat just as vital as any other in the inning, as her grounder to the right side allowed both runners to advance 60 feet and put the tying run into scoring position. Stewart, the owner of the game-winning RBI the day before in the Crusaders’ 1-0 win over UIC, stepped in with Valpo down to its final out and came through, lining a single into center to bring home both Callaghan and Trepanier, setting off a celebration in the Crusader dugout and in the stands as Valpo forced extra innings.

“Everybody in our dugout seemed as dialed in as they had been all week entering the bottom of the seventh,” said Stake. “Once we put that leadoff runner on base, the dugout erupted and the bats followed suit.”

The eighth inning would not be without drama, either. An infield single and a walk with one out put two on base, and Weissenhofer would give way in the circle for the first time in the tournament, as the Crusaders’ workhorse yielded the ball to sophomore Ashlyn Montgomery (Lebanon, Ind./Lebanon).

“Taylor has carried us at points in this tournament, and at other points, our bats or our gloves have carried her,” said Stake. “Her performance today was gutsy and the rest of the team really responded to that by laying it all on the line – everybody was just pushing incredibly hard in the same direction today.”

With the insertion of Montgomery, a ground-ball pitcher, the strategy was clear – get a pair of grounders and allow the defense to do the work to keep Wright State off the board. It worked to perfection, as first Trepanier gobbled up a grounder to second to record the second out at first base. Then, with two runners in scoring position and a slapper at the plate, Calombaris snagged a slap cleanly and made a strong throw across the diamond in plenty of time.

“The infield knew they were going to get two ground balls from Ashlyn, and that it was their job to put the inning away,” said Stake. “Ashlyn stepped into a big situation with ice in her veins, did exactly what we wanted her to do, and the infield bought in behind her.”

Sophomore Taylor Nadler (New Haven, Mo./St. Francis Borgia) capped off her strong tournament at the plate with her biggest hit, leading off the bottom of the eighth with a single the other way inside the third base bag. Calombaris perfectly executed a sacrifice bunt to move Nadler into scoring position, and Moreno would take care of the rest, driving a 1-0 pitch to the wall in right field to bring Nadler around and jump-start the raucous celebration at home plate.

“Steph was very locked in during pre-game hitting today, and she looked very comfortable at the plate,” said Stake. “When she stepped up to bat in the eighth inning, I knew she was going to hit the game-winner – you could see it in her countenance.”

Both teams had shots at cracking the scoreboard in their respective first turns at the plate, as Wright State got a one-out double in the first inning, while the Crusaders put runners on first and second with one away in their first turn at bat. But neither could score, and the two squads went the next three innings without advancing a runner even into scoring position.

Wright State would go ahead in the fifth inning, as back-to-back home runs gave the Raiders a 3-0 lead. Lawson kept WSU from scoring a fourth run in the sixth inning, throwing a one-hop strike to the plate that Stewart gloved and applied the tag on the sliding runner. The Raiders would eventually add that fourth run on another round-tripper in the seventh, setting up the drama of the bottom of the inning.

Weissenhofer tossed 7.1 courageous innings on Saturday in her fourth consecutive starting assignment, capping a tournament in which she threw 477 pitches in a 72-hour window. Montgomery was credited with the win after recording the final two outs of the eighth inning, improving to 2-2 on the season. Ashley Sharp took her second loss of the tournament against the Crusaders for Wright State (37-23), going the distance.

“Taylor didn’t have her best stuff physically, but that’s what happens when you’ve been the workhorse in a championship series,” said Stake. “Both her and Sharp laid it all out there today.”

Offensively, Valpo rapped out 11 hits against Sharp and the Raiders, as five different Crusaders posted multi-hit games in the title game win. Two hits apiece came from each of the top three spots in the Valpo lineup – Trepanier, Lawson and Stewart – while Moreno and Nadler each had two-hit games as well.

The tournament championship is the third since joining the Horizon League for Valparaiso, as the Crusaders previously claimed the league tournament crown in 2012 and 2013. Saturday marked the fourth time in the last five seasons that Valpo has advanced to Championship Saturday, but was the first time in program history that it had advanced there by going unscathed through the winner’s bracket.

Valparaiso (18-32) will learn its destination and opponents for the regional round of the 2016 NCAA Tournament on Sunday evening as ESPNU televises the tournament selection show at 9 p.m. CT.