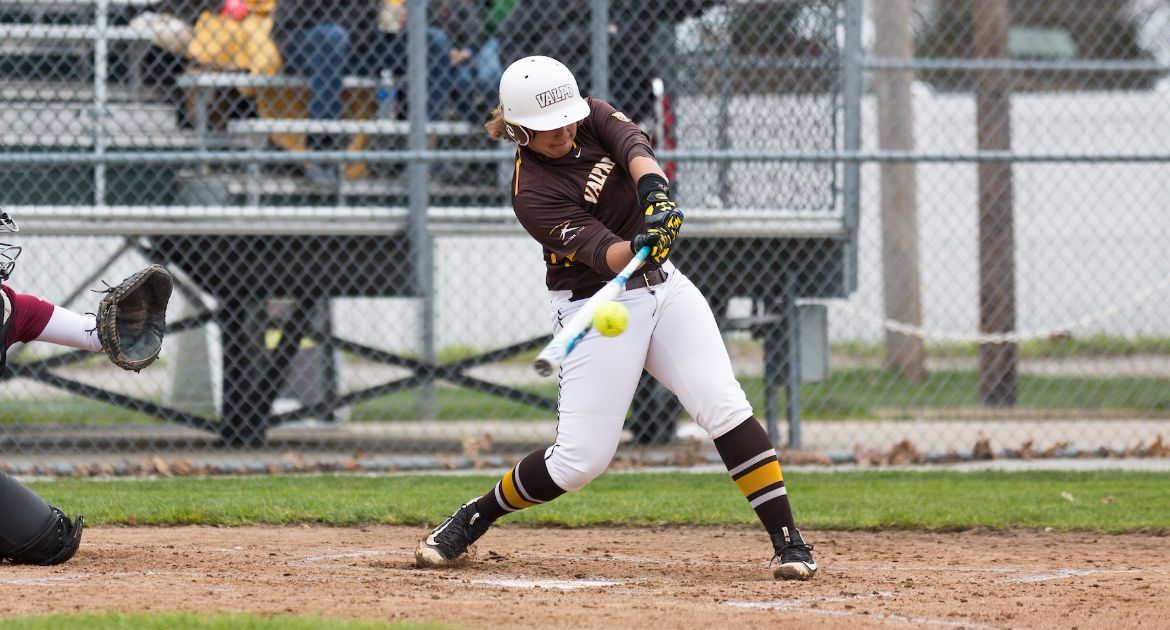 Down three runs entering the seventh inning, and still trailing down to its final strike? No problem Friday for the Valparaiso University softball team. Senior Jorgi Calombaris (Frankfort, Ill./Lincoln-Way East) tied the nightcap with Cleveland State with a two-out, two-strike base hit in the seventh, and classmate Sam Stewart (Frankfort, Ill./Lincoln-Way East) delivered the game-winning blow with a homer in the eighth to give Valpo a 4-3 win and the doubleheader sweep. The Crusaders scored the first five runs en route to a 5-3 victory over the Vikings in the day’s opener.

“I don’t love that we saved our offensive production for the seventh inning in the second game, but I do love that we’ve consistently shown that we don’t give up, regardless of the uphill battle in front of us. Jenna got us rolling and we generated some difficult-to-stop momentum from there. During the pitching change, “Let the Bodies Hit the Floor” played over the speakers, and our dugout essentially became a mosh pit. I watched it back on video, and in addition to our dugout jumping all over the place, our batters on deck were as well. Our ability to pull out the game is a perfect example of “culture wins.” Everyone fed each other in that seventh inning with their energy. Not everyone stood in the box that inning, but everyone on our team contributed to the runs.”

“Jorgi and Sam both stepped up in back-to-back innings offensively, and both had strong days on the other side of the ball as well. They continue to be excellent senior leaders by example and influence.”

“Morgan had a nice day for herself. She’s not consistently been in the starting lineup, and it’s challenging to bounce back and forth between starting and not – I think she’s handled it well. She found ways to get on base today and looked eager and prepared for her chances.”

“Emily had the best performance of her young career today. I thought she had good command of her zone and worked well with Sam. I was also impressed with her poise in the circle. She took her opportunity and ran with it. I’m proud of her growth over this year.”

“Our pitching staff, as a whole, did a great job today, each handling whatever role they were given during the doubleheader. Monica strategized very well with our pitching personnel and called two very good games.”

“Beating any team three times is difficult. They’ve seen all our pitchers and we’ve seen theirs. Tomorrow isn’t so much about how we beat Cleveland State, as it is how we come out playing our best brand of ball. We had moments today, but we have the opportunity tomorrow – especially with our bats – to make adjustments and really challenge their defense.”

The Crusaders (21-13, 8-6 Horizon) look to close out the sweep of the Vikings at 11 a.m. CT on Saturday from Cleveland. The game can be seen live on ESPN3, WatchESPN and the ESPN app, with links for the live video and live stats available via ValpoAthletics.com.