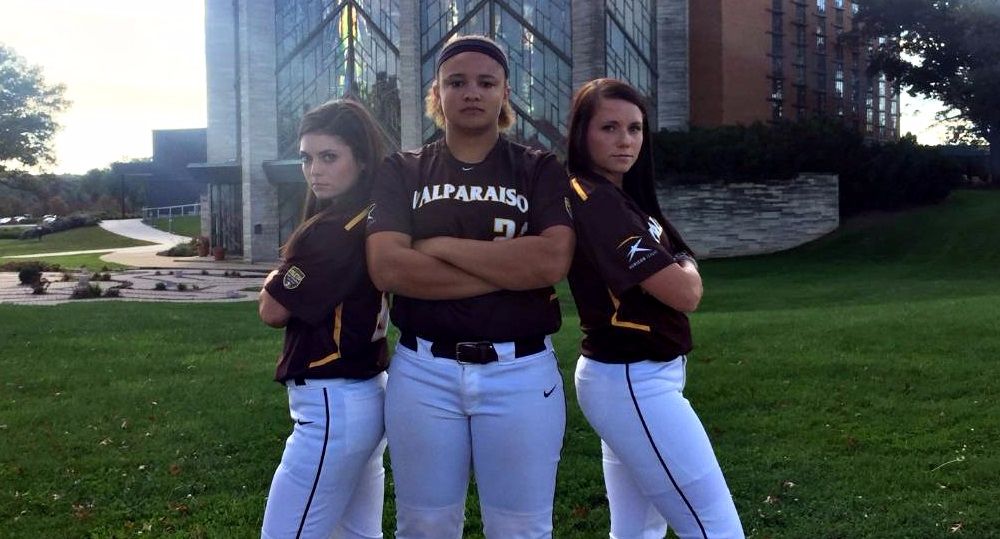 Next Up in Crusader Softball: Having already secured a berth into next week's Horizon League Championship, the Valparaiso University softball team looks to close out the regular season on a high note this weekend as the Crusaders welcome Wright State to town for a three-game series. Prior to Saturday's doubleheader, Valpo will honor its three-player senior class: Jorgi Calombaris, Taylor Lawson and Sam Stewart.

Looking Ahead: The Horizon League Championship runs next Wednesday through Saturday at the site of the top overall seed.

Following the Crusaders: All three games this weekend will have live stats available via ValpoAthletics.com and are scheduled to have live video on ESPN3 as well. Most league home games and select road games throughout the year will be available on ESPN3, WatchESPN and the ESPN app.

Head Coach Kate Stake: Kate Stake was hired as head coach of the Valparaiso softball program on July 23, 2014 and is in her third season as head coach, owning 58 victories. Stake led the Crusaders to the 2016 Horizon League Championship and a berth in the NCAA Tournament - the third in program history. Stake arrived at Valpo with eight seasons of assistant coaching experience at the Division I level, most recently serving as an assistant at mid-major power Hofstra.

Series Notes: Valpo owns a 26-16 advantage in the all-time series over Wright State, and is 18-14 against the Raiders since joining the Horizon League prior to the 2008 season. Last season, the Crusaders went 1-2 at WSU to close the regular season, but the one win clinched Valpo's berth into the Horizon League Championship. Then, the Crusaders won both matchups against the Raiders in the league tournament, including the dramatic title game win.

Scouting the Opposition: The Raiders enter this weekend's series coming off of a three-game sweep in mid-week action against Northern Kentucky, pushing their record to 20-26 overall and 14-7 within Horizon League play. Honnah Susor leads the WSU offense, hitting at a .392 clip with 36 runs scored, while in the circle, Ashley Sharp is 11-3 with a 2.67 ERA in Horizon League-only action.

Experienced, Yet Youthful: The 2017 Crusader softball team features a distinct mix of veterans and newcomers. Seven starters returned from last year's lineup, but the Crusaders also welcomed nine first-year players to the program this season - seven of whom are true freshmen.

In the Field: Last weekend's results secured Valpo's spot in the six-team field for the Horizon League Championship, slated to begin next Wednesday at the league's regular season champion. The Crusaders will be locked into the sixth seed unless they win all three games from the Raiders this weekend. Valpo has qualified for the tournament field every season since the league moved to a six-team format prior to the 2010 season.

Winning Series: If the Crusaders can win at least two of three this weekend against Wright State, they will match a program best for Horizon League series won. Valpo has claimed series so far this year versus Northern Kentucky, Youngstown State, Green Bay, Cleveland State and Detroit Mercy. The five series victories are tied for second-most in a single season since moving to the Horizon League, matching the 2008 squad's five series wins. Only the 2012 team, which captured the league's regular season title, claimed more series wins (six).

Celebrating the Seniors: Valpo will honor its three seniors prior to Saturday's season opener against Wright State: Jorgi Calombaris, Taylor Lawson and Sam Stewart. The trio has been a part of 82 victories over their four seasons, including last season's Horizon League Championship and NCAA Tournament berth. Calombaris and Lawson were both All-Newcomer Team honorees as freshmen, while Lawson also earned Second Team All-League honors in 2014. Meanwhile, Stewart ranks among the top contenders for Horizon League Player of the Year accolades this year.

Where They Rank: All three seniors have made their mark on the Crusaders' record book as well. Calombaris is eighth in program history in at-bats and sits just outside the top-10 in runs scored, while defensively, her assist total this season is ninth-best in a single season. Lawson ranks third on Valpo's career steals chart and is also just outside the top-10 in runs scored. Meanwhile, Stewart is on pace to set new program single-season records for home runs - where she is just one shy of matching the current mark of 14 - and slugging percentage, and she already ranks second in walks and fifth in RBIs. On the career charts, Stewart ranks among Valpo's all-time top-five in home runs, RBIs and walks.