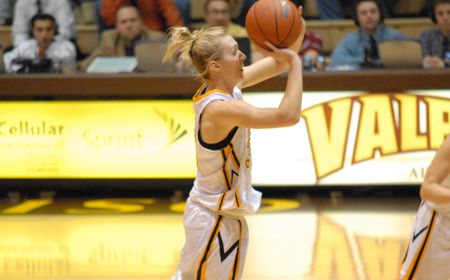 Coming Up in Crusader Hoops: After upsetting #23/21 Purdue on Wednesday evening, Valparaiso will look to “Pack the ARC” on Saturday afternoon as the Crusaders host their second straight ranked opponent when #8/8 Notre Dame comes to town.  This will be will the Crusaders’ final home game prior to the start of Horizon League action in January.

On the Air: Saturday’s game against Notre Dame can be seen live on Lakeshore Public Television in the Northwest Indiana and Chicagoland area.  Joe Arredondo and Dick Harlan will call all of the action live from the ARC.  In addition, the game can be viewed live online as part of the Horizon League Network at horizonleaguenetwork.tv or through the link at valpoathletics.com.  The game will also be picked up by satellite and cable providers as part of the ESPN Full Court package as well as online at ESPN360.  The game can also be heard live on WVUR (95.1-FM, Valparaiso) and online at www.valpoathletics.com.

Series Notes: Valparaiso and Notre Dame are meeting for the 22nd time in a series that dates back to December 3, 1977.  The Fighting Irish have won all 21 of the previous meetings, including a 94-56 win at the Joyce Center in South Bend, Ind. last season.  This is Notre Dame’s 10th trip to Valpo, with the last one coming on December 19, 2006, a 60-59 Fighting Irish victory here at the ARC.  The schools are meeting for the 10th consecutive season.

Wrapping Up Purdue: Sylwia Zabielewicz’s three-point play with 2:32 to play put Valpo on top for good and the Crusaders made 11-of-12 free throws down the stretch to upset #23/21 Purdue 71-60 at the ARC to record the program’s first win ever against a top-25 foe.  Agnieszka Kulaga led the Crusaders with 17 points and eight rebounds while Aimee Litka and Launa Hochstetler added 13 points each.  Valpo’s defense limited Purdue to just 31.3% shooting from the field on the night.

Scouting Notre Dame: The Fighting Irish opened the season with seven straight wins before falling in overtime 63-59 at Michigan on Wednesday night.  Ashley Barlow leads Notre Dame averaging 14.8 points and 5.2 boards per game while Lindsay Schrader adds 12.4 points per contest.  As a team the Fighting Irish are shooting 47.0% from the field, including 43.6% from three-point range.

Crusaders Look to “Pack the ARC” against Notre Dame: Valpo’s game on Saturday afternoon against Notre Dame has been selected as Valpo’s “Pack the House Challenge” game, an ongoing nationwide women's basketball attendance competition taking place throughout the season.  Nearly 300 of the nation's Division I women's basketball programs signed up to participate in the competition, including nine Horizon League. The premise for each participating institution - select a game/date at which an attempt is made to break your single-game all-time or 2007-08 season record. Based on the final results nationwide, 32 conference champions and one overall national champion will be determined by the NCAA.

First Win Ever Against a Ranked Foe: The victory against Notre Dame was the first ever for a Crusader squad against a team ranked in the top-25.  It was the 22nd game Valpo had played against an opponent ranked in the Associated Press top-25 all-time.

Moving Up the RPI: As of Friday morning, December 12, Valparaiso checked in 42nd overall among the 341 Division I programs in RPI according to collegerpi.com while the Horizon League ranked 10th out of 31 conferences.  The Crusaders’ strength of schedule ranked 50th.

Litka for Three: Aimee Litka leads the league shooting 47.5% from three-point range on the season, and is second making 3.2 triples per contest.

Good Shooting/Defense Thus Far: The Crusaders have posted a better field goal percentage than all six of their opponents thus far this season.  Defensively, Valpo is holding opponents to just 36.8% shooting.  In the win against Purdue, the Brown and Gold limited the Boilermakers to just 31.3% shooting on the night, including just 28.1% in the second half.  Offensively, Agnieszka Kulaga is third in the Horizon League making 54.7% of her shots from the floor this year.

Balanced Rebounding: After being outrebounded by 10 in the first half Wednesday night against Purdue, the Crusaders controlled the boards in the final 20 minutes, closing the gap to within one by game’s end.  Agnieszka Kulaga led the rebounding charge as the 5’7” guard hauled down eight boards.  Lauren Kenney, Aimee Litka, and Sylwia Zabielewicz had seven rebounds each.

Farris Has Solid Game: Whitney Farris had her most productive night of the season against the Boilermakers, scoring a season-high eight points while pulling down six rebounds.  She was 4-for-5 from the free throw line, making two big ones in the final minute.

Super Women: Launa Hochstetler and Aimee Litka both played all 40 minutes in the win against Purdue.  They rank two and three in the Horizon League in minutes played, only trailing teammate Agnieszka Kulaga who is averaging more than 37 minutes of action per night.

Big Crowds: Valpo has played in front of more than 1,000 fans in each of the last five games, including 1,374 that witnessed the upset of Purdue.

From Beyond the Arc: Valpo opponents are shooting just 31.7% from three-point range this season.  Meanwhile, the Crusaders are making 39.2% of their attempts, tops in the Horizon League.  Valpo is led by Aimee Litka’s 47.5% effort beyond the arc.

Freeman Earns Milestone Win: Head coach Keith Freeman’s victory against Florida State was the 375th of his career coaching women’s basketball.  In his 21st season overall, his next milestone on tap is 250 victories at Valpo. He needs just three more wins to reach the Valpo mark, where he has been coaching the last 15 years.

Litka Moves Into Top-10 All-Time in Triples: Aimee Litka made three more three-pointers against Purdue to solidify her spot in the top-10 in school history.  The senior now has 124 career triples and ranks ninth all-time in a Crusader uniform.  Litka needs eight more treys to match Kathryn Knoester’s (2000-2004) eighth place mark of 132 threes.

Home Sweet Home: Valpo has had constant success at the ARC over the past seven years.  Last season the Crusaders were 9-4 at home and are already 2-0 this year with wins over Bowling Green and Purdue.  Since the beginning of the 2001-2002 campaign, Valpo has posted a 73-20 (.785) record at the ARC.