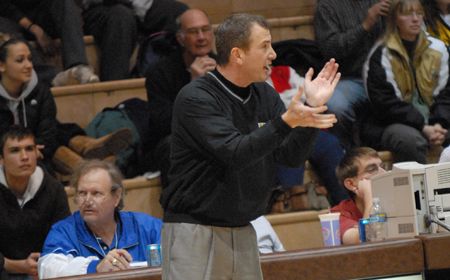 Coming Up in Crusader Hoops: After opening the Horizon League season with a victory on Saturday, the Valparaiso Crusaders return to the hardwood on Monday evening when the Brown and Gold play host to Cleveland State.  Valpo is looking for its third straight win, something the Crusaders have not done since winning four straight between December 16, 2007 and January 10, 2008.

On the Air: Monday’s game against Cleveland State will be carried live on the Horizon League Network at horizonleaguenetwork.tv or through the link at valpoathletics.com.  WVUR’s Adam Amin and Nick Garling will call all the action live from the ARC.

Wrapping Up Youngstown State: Valpo shot 51.8% from the floor while holding the Penguins to just 23.7% shooting on the afternoon on the way to doubling up Youngstown State 86-43 at the ARC on Saturday.  Valpo raced out to a 23-point halftime lead and opened the second half with a 10-1 run to seize complete control.  Ashley Varner led all players with 14 points and eight rebounds while Betsy Adams and Whitney Farris came off of the bench to add 12 points each.  The Crusader bench scored 49 points on the day and the Brown and Gold outrebounded Youngstown State 48-29.  Tiara Scott led the Penguins with 13 points.

Scouting Cleveland State: The Vikings had their two-game winning streak snapped on Saturday afternoon dropping their Horizon League opener at Butler 55-46.  Cleveland State is 4-1 at home this season, but just 1-6 on its opponent’s home floor.  Kailey Klein leads the conference scoring 19.8 points per game, including a 27-point effort at Butler on Saturday.  She is also grabbing 6.1 rebounds per night.  Dominique Butler and Shawnita Garland are each averaging in double figures as well at 10.9 and 10.5 points respectively.  The Vikings were picked to finish fourth in the Horizon League this year.

Freeman Looks for #250 at Valpo: Head coach Keith Freeman’s next victory will be his 250th on the bench of the Crusaders.  Valpo’s head man for 15 seasons, Freeman is 249-173 all-time at Valpo.  He has recorded more than half of the program’s victories all-time, and has led the Brown and Gold to winning seasons in 12 of his first 14 years with the Crusaders.

Valpo and the RPI: Valparaiso’s challenging non-conference schedule has paid off in the RPI as the Crusaders has played the 63rd toughest schedule in the country to date according to collegerpi.com on January 4.  Valpo’s RPI is 92 out of 341 schools with a 6-5 record and the Horizon League is ranked 12th as a conference out of 31 leagues.

Varner Continues Career Efforts: Ashley Varner has played three solid games in a row for Valpo.  The sophomore scored eight points, then a career high, against La Salle and followed that up against North Florida with a career-best nine rebounds while also scoring seven points.  Varner made her first start of the season Saturday against Youngstown State, scoring a career-high 14 points and grabbing eight rebounds, six of which came on the offensive end of the floor.

A Complete 180 Degrees: After outrebounding just four opponents throughout the entire 2007-2008 season, the Crusaders lead the Horizon League in rebounding margin this season at +4.3 per game.  Valpo has been outrebounded just three times in 11 games thus far this season.

Giving It Up: Launa Hochstetler leads the Horizon League averaging 5.1 assists per game this season.  The senior point guard has registered nine and eight assists in each of the last two games, the first tying a career high.  She has recorded seven or more helpers in four games and has at least four in all but three contests this year.

Getting Bench Production: Valpo’s bench stepped up on Saturday and scored 49 points in the win against the Penguins.  Rashida Ray scored her first nine points of the year while Katie Emig added a season-high eight for the Crusaders.  Whitney Farris also made 5-of-6 from the field for a season-high 12 points.  Betsy Adams also scored a season-high 12 points off of the bench while Stephanie Thomas checked into the lineup for the first time this season and added a hoop.  Starter Ashley Varner was the sixth Crusader to post a season-high with 14 points.

Varner for Three: Though she has not taken many three-point attempts this season, Ashley Varner has been effective when stepping out and trying the trifecta.  The sophomore is shooting 66.7% (6-of-9) from beyond the arc this year.  Five of the six threes have come in the last three games for Varner.

Farris and Emig Get to the Boards: Whitney Farris and Katie Emig both did a solid job of rebounding Saturday against Youngstown State.  Both had seven boards, with Emig’s total marking a new season high for the redshirt-sophomore.  Farris is now third on the team grabbing 4.8 rebounds per night for the Crusaders.

Defense Wins Games: Valpo is 5-0 this season when allowing opponents to score 60 points or less.  The Crusaders are holding opponents to just 35.8% shooting from the floor, a mark which leads the Horizon League.  In addition, the opposition is shooting just 30.5% from three-point range on the season against the Brown and Gold.

Kulaga Nearing Top-20 All-Time at Valpo in Scoring: Agnieszka Kulaga has the opportunity to move into the top-20 all-time at Valpo in scoring within the next couple of games.  The senior guard has scored  793 career points (8.9 per game), and needs just 37 more to match Jill Otto’s (1985-1989) 20th place mark of 830 points.

First Win Ever Against a Ranked Foe: The victory against Purdue was the first ever for a Crusader squad against a team ranked in the top-25.  Valpo has played three top-25 programs this season, going 1-2.

Freeman Earns Milestone Win: Head coach Keith Freeman’s victory against Florida State was the 375th of his career coaching women’s basketball.  In his 21st season overall, his next milestone on tap is 250 victories at Valpo. He needs just one more win to reach the Valpo mark, where he has been coaching the last 15 years.

Kulaga Nearing Top-15 in Assists: Agnieszka Kulaga had one assist against La Salle and now has 216 career assists to rank 16th all-time wearing the Brown and Gold.  Next up on the assist charts for Kulaga is Stephanie Greer (1987-1991), who is 15th with 224 career helpers, eight more than the senior.

Litka Among Top-10 All-Time in Triples: Aimee Litka made one more three-pointer against Youngstown State to solidify her spot in eighth place in school history with 135 threes.  The senior is five triples shy of Heidi Diefenthaler’s (1992-1996) seventh place total of 140 treys while wearing the Brown and Gold.

Smart Students as Well: Valpo has had two players named U.S. Army Scholar-Athletes of the Week by the Horizon League thus far this year.  Agnieszka Kulaga earned the honor on December 19 while Launa Hochstetler captured the accolade one week later on December 26.

Home Sweet Home: Valpo has had constant success at the ARC over the past seven years.  Last season the Crusaders were 9-4 at home and are already 3-1 this year with wins over Bowling Green and Purdue.  Since the beginning of the 2001-2002 campaign, Valpo has posted a 74-21 (.779) record at the ARC.