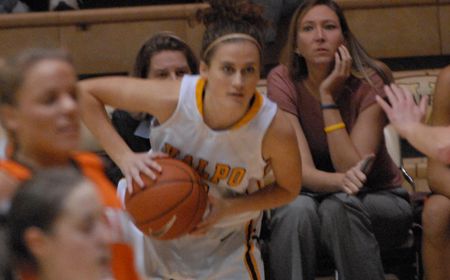 Cleveland State used a 25-7 run midway through the first half to take a double-digit lead and never allowed Valparaiso to get closer than nine the rest of the way as the Vikings handed the Crusaders their first Horizon League loss of the season, 68-55, on Monday evening at the Athletics-Recreation Center.

Valparaiso shot just 27% from the floor for the game while Cleveland State made 58% of its shots, including shooting 65% in the first half to break the game open.

Valpo never led by more than four points early on, and following a Betsy Adams (Monticello, Ind./Twin Lakes H.S.) jumper at the 12:20 mark of the first half, tied the game for the final time on the evening, 13-13.  From there Cleveland State went on the big run over the next nine minutes to take an 18-point lead, 38-20, and eventually took a 17-point advantage into the locker room.

The Vikings connected on 15-of-23 from the floor in the first half, including 6-of-9 from three-point range.  Jessica Roque scored 13 points in the stanza, including hitting a pair of triples during the spurt.

The Crusaders tried to cut into the deficit to start the second half, scoring the first six points, but Cleveland State  After the Viking lead grew to 19, 58-39, Valpo tried to make one last run.  Aimee Litka (South Bend, Ind./Saint Joseph’s H.S.) drained a three and Adams scored six straight points to bring the Brown and Gold within 10 at the 7:52 mark. responded with seven in a row to push the lead back to 18 at the 15:20 mark.

Another Adams three with 6:33 to play cut the lead to single digits for the first time since the 4:54 mark of the first half, but the Vikings would not allow Valpo to get any closer the rest of the way.

The Crusaders shot just 24% from the floor in the second half, making just 4-of-19 shots from inside the three-point arc.

Adams finished the night with a career high 14 points for the Crusaders, including making 3-of-5 from three-point range.  Whitney Farris (Kokomo, Ind./Kokomo H.S.) also had 14 points and grabbed a team-high eight rebounds.  Launa Hochstetler (Berlin, Ohio/Hiland H.S.) had nine points and six assists as well for Valpo.

“Betsy is a good basketball player,” commented Freeman.  “She got some open shots tonight and was able to knock them down.”

Valpo did hold Kailey Klein, the Horizon League’s leading scorer, averaging 19.8 points per game entering the contest, to just seven on the night.

“We did a good job on their star (Klein) and their other kids just stepped up,” added Freeman.

Valparaiso (6-6, 1-1) will take to the road on Thursday evening heading to Dayton, Ohio to battle Wright State  Tip-off is set for 6 p.m. CST at the Nutter Center, with all the action carried live on sportsjuice.com.  The game can also be seen live on the Horizon League Network. (5-8, 1-1).

Game Notes: Hochstetler now has 287 career assists, one shy of Lauren Bechtold’s (2002-2006) sixth place mark all-time at Valpo … the Crusaders grabbed 19 offensive rebounds but had just 11 second chance points … Cleveland State committed 27 turnovers in the game … the Vikings also made all 10 free throw attempts … Valpo leads the all-time series 11-4, but is just 4-4 against the Vikings at the ARC.