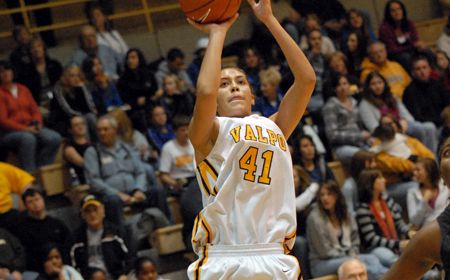 Coming Up in Crusader Hoops: After finishing off a three-game road trip, the Valparaiso Crusaders return to the Athletics-Recreation Center for a rare Friday night contest against Detroit.  This week marks the beginning of the second half of Horizon League play.  The Crusaders open round two of the league slate tied with UIC for fifth place, just a game out of third in the standings.

On the Air: Friday’s game against Detroit will be carried live on the Horizon League Network at horizonleaguenetwork.tv or through the link at valpoathletics.com.  In addition, the game can be heard live on WVUR (95.1-FM, Valparaiso) and through the Valpo athletics website.  Adam Amin and Adam Tein will call all of the action live from the ARC.  Live stats are also available via Gametracker through valpoathletics.com.

Series Notes: Valparaiso leads the all-time series against Detroit 4-3, but the Titans hold a 2-1 advantage all-time in games played at the ARC.  The Crusaders have won the last three meetings between the two schools, including a 70-65 overtime win at Detroit back on January 10.  Sylwia Zabielewicz came off of the bench to score 20 points and grab nine rebounds for Valpo in that win while Leah Hochstetler added 14 points and four assists.  Sandi Brown led the Titans with 16 points and seven boards in the first meeting this season.

Wrapping Up Green Bay: The Phoenix used a 22-2 run in the first half and a 21-2 spurt in the second to defeat the Crusaders 76-45 on Saturday afternoon in Green Bay, Wis.  Green Bay shot 54% from the floor and had four players in double figures, led by Heather Golden who had 13.  Leah Hochstetler led Valpo with nine points as the Brown and Gold shot just 35% and committed 20 turnovers.

Scouting Detroit: The Titans have dropped seven of their last eight games overall following a 65-58 setback at Wright State last Saturday.  Detroit is 3-10 on the road this year.  The Titans are led offensively by Sandi Brown, who ranks fifth in the Horizon League in scoring, averaging 12.6 points per night.  She also is sixth in the conference in rebounding, grabbing 6.5 boards per game.  Brigid Mulroy adds 10.9 points per game and is third in the conference averaging 2.1 three-pointers per contest.

Kulaga and Hochstetler Earn Academic All-District Honors: Agnieska Kulaga has been named to ESPN The Magazine’s Academic All-District V First Team while Launa Hochstetler was voted to the Second Team as selected by CoSIDA.  Kulaga leads the Horizon League in free throw shooting this season and in the classroom already has earned her bachelor’s degree.  The senior is now pursing her master’s degree in business administration.  Hochstetler is the conference’s top assist-maker, and ranks second in free throw shooting.  In the classroom, the senior is a double major in accounting and finance.

Home Sweet Home in February: The Crusaders will play six of their eight games in the month of February at the Athletics-Recreation Center beginning with the two contests this weekend against Detroit and Wright State.  When Valpo does go on the road next week, it will just be to Chicago for a pair of day trips against Loyola and UIC.  The Crusaders then close the month with four straight games at home, where Valpo is 5-2 this season and 76-22 (.776) since the start of the 2001-2002 campaign.

Stealing a Win Against Milwaukee: Valparaiso acted as a bunch of thieves on last Thursday evening in the win against the Panthers, registering 18 steals on the night, bettering the team’s previous season best by six set earlier this year at Detroit.  Aimee Litka and Launa Hochstetler each had five steals a piece, which for Litka marked a new career high.  As a team the Crusaders were just three steals shy of a top-10 performance all-time in school history.

From Downtown: Valpo leads the Horizon League averaging 6.2 three-pointers per game this season.  The Crusaders have already made 118 triples this year, led by Aimee Litka who has made 45 (2.4 per game).  The senior is second in the Horizon League in triples per game individually.

A Tight Race Midway Through: Valpo enters play this weekend in fifth place in the Horizon League standings, but just one game out of third and two games out of second.  On the other hand, the Crusaders only have a one game lead on seventh place.  The top four teams host quarterfinal games while the seventh place team has to play a first round contest in the Horizon League Tournament which takes place March 9-15 on campus sites.

RPI Update: Entering Thursday morning, Valpo was 122 out of 341 schools in the rankings according to collegerpi.com, with a strength of schedule of 108.  The Horizon League as a conference ranks 15th out of 31 conferences, with six teams ranked in the top 200.

70 Is the Magic Number: Valpo has posted a 5-1 record this season when scoring more than 70 points.  However, when allowing 70 or more points on the year, the Brown and Gold is just 1-5.  The Crusaders are also 5-1 when holding the opposition to less than 60 points in a game.

Among the Nation’s Best at the Free Throw Line This Year...: Agnieszka Kulaga and Launa Hochstetler rank 6th and 18th respectively in all of NCAA Division I at the free throw line this season.  Kulaga also leads the Horizon League shooting 89.7% (52-of-58) from the line this year while  Hochstetler is an 87.2% (68-of-78) shooter this year.

... and Also All-time at Valpo: Launa Hochstetler and Agnieszka Kulaga both have surpassed the 225 attempt minimum from the free throw line to qualify on the all-time free throw percentage charts at Valpo.  Hochstetler enters the game tops all-time as an 84.9% career free throw shooter while Kulaga ranks second making 83.6% of her attempts.  Entering this season, Mo Drabicki (1994-1998) was at the top of the list shooting 83.0% for her career.

Kulaga and Litka Move Into Top-20 All-Time at Valpo in Scoring: Agnieszka Kulaga and Aimee Litka have both moved on to the all-time scoring list at Valpo.  The duo are tied for 20th place all-time at Valpo with 836 career points.  They are four points shy of Mo Drabicki (1994-1998) for 19th place on the all-time charts.  Kathryn Knoester (2000-2004) ranks 18th with 868 career points.

Surpassing 300 Assists: Launa Hochstetler’s feed to Whitney Farris with 13:53 to play in the second half against Loyola made the senior just the sixth Crusader in school history to reach the 300 assist mark for a career.  Hochstetler currently has 309 career assists and needs just 31 more helpers to move into the top-five all-time wearing the Brown and Gold.

Kulaga Moves Into Top-15 in Assists: Agnieszka Kulaga had one assist against Green Bay and now has 231 career assists to rank 13th all-time wearing the Brown and Gold.  She now trails Jeanette Gray (1999-2003) by just seven thefts for 12th on the all-time list.

Litka Nearing Top-5 All-Time in Triples: Aimee Litka made two more three-pointers against Milwaukee and has passed Megan Newcomer (1996-2000) to move into sixth place all-time at Valpo for triples made in a career.  Litka now has 150 treys in four seasons, and is just one triple shy of Jamie Gutowski (2002-2006) for fifth place all-time.