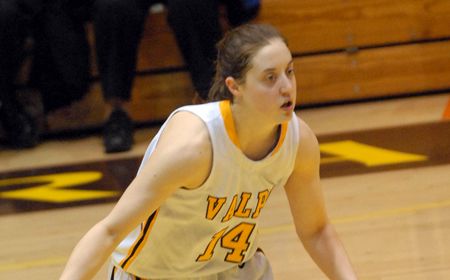 Valparaiso tied the top team in the Horizon League with 3:30 to play, but was unable to forge ahead in the game’s final minutes, dropping a 68-60 contest to Green Bay on Thursday evening at the Athletics-Recreation Center.

After dropping a 31-point decision to the Phoenix in Green Bay last month, the Crusaders came out and showed they could compete with the team that clinched the Horizon League’s regular season title and number one seed in the upcoming conference tournament.

“I was a possession game late that could have gone either way,” head coach Keith Freeman said.  “They hit a couple of threes late and we didn’t.”

Trailing by two at the break, 33-31, the Crusaders tied the game on their first offensive possession of the second half as Sylwia Zabielewicz (Warsaw, Poland/Generala Wladyslawa Andersa H.S.) scored inside on a dish from Launa Hochstetler (Berlin, Ohio/Hiland H.S.).

Green Bay reeled off six straight points to retake the lead, one they would keep until the final minutes.  Hochstetler cut the deficit to three twice, once on a triple and another time on a free throw, but the Phoenix eventually built an eight-point advantage, 51-43, with 8:11 to play.

Valpo never gave up, going on a 7-0 run, capped with a three-pointer by Agnieszka Kulaga (Tarnow, Poland/I Liceum Ogolnoksztalcace H.S.) to cut the lead to one with six minutes to play.

The two schools traded baskets over the next two-and-a-half minutes before Lauren Kenney (Mooresville, Ind./Mooresville H.S.) scored underneath and was fouled.  She converted the free throw to tie the game at the 3:30 mark.

Kati Harty answered for the Phoenix with a three-pointer and the Crusaders would not be able to retie the game.  Valpo had the game down to two points with 1:37 to play, but two turnovers down the stretch, along with another triple by Celeste Hoewisch, gave the visitors the victory.

“We did a lot of good things tonight,” said Freeman.  “We competed hard.  We did a reasonably good job of defending and they are so hard to defend.”

Green Bay used an early 7-0 run to build an 18-10 advantage, only to see the Crusaders answer with a 8-2 spurt of their own to pull within two, 22-20, with eight minutes to play before intermission.

Two free throws by Kenney at the 4:49 mark gave Valpo its lone lead of the game, 26-25, but Green Bay took the lead for good as Kayla Tetschlag made all three free throws at the 3:04 mark, and eventually took the two-point lead into the locker room.

Hochstetler led the Crusaders with 17 points and five assists while playing all 40 minutes for the second straight game.  Kenney added 12 points while Kulaga scored 11 for the Brown and Gold.  Whitney Farris (Kokomo, Ind./Kokomo H.S.) grabbed a game-high seven rebounds.

Valpo shot 50% from the floor for the game while Green Bay connected at 47.2%.  The Crusaders held a slim 30-28 advantage on the boards, but the Phoenix had the edge 10-7 on the offensive glass.

“We attacked better than we did in the first game,” said Freeman.

The Crusaders committed 21 turnovers, though, while Green Bay made just nine miscues.

“The difference in the game was points off of turnovers,” concluded Freeman.  “They outscored us 22-10.  We have to handle the ball with more sureness.”

Valparaiso (14-12, 8-7) will close out the home portion of the regular season on Saturday afternoon with a 1:35 p.m. Senior Day contest against Milwaukee.  The game can be seen live on the Horizon League Network as well as heard live on WVUR (95.1-FM, Valparaiso).

Game Notes: Green Bay entered the game allowing a nation’s best 50.1 points per game … Valpo made 6-of-12 three-pointers against a team allowing just 26.5% from long range on the season … Hochstetler became the fifth Crusader in school history to reach the 350 assist plateau and now has 351 career helpers … Kulaga moved past Megan Newcomer (1996-2000) into 11th place all-time at Valpo with 248 career assists … Green Bay leads the all-time series 18-4.