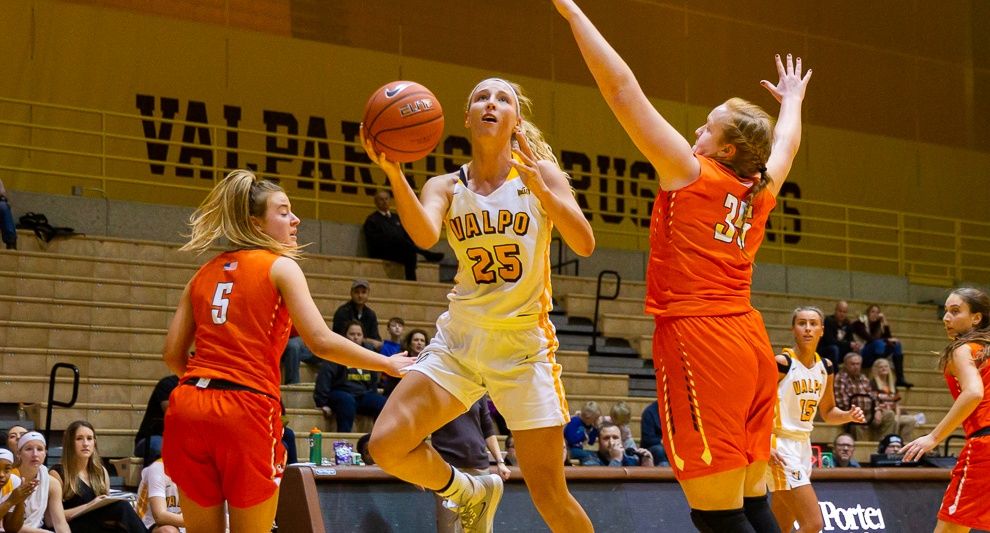 A wild affair Sunday afternoon at the ARC saw the Valpo women’s basketball team rally from a 12-point fourth-quarter deficit, tying the game within the final 30 seconds on a 3-point play off an offensive rebound from junior Grace White (Redby, Minn./Red Lake [Denver]), and score the first five points of overtime on its way to a 95-90 victory over Bowling Green State University. Senior Grace Hales (Cromwell, Ind./Westview) and sophomore Shay Frederick (Greenville, Wis./Hortonville) tied for team-high honors with 21 points each, both matching their respective career high.

“I'm just really proud of the overall team effort today. Every single player was key to us winning - 11 people played and all 11 brought something to the table today.”

“We made some adjustments offensively in the second half - Bowling Green was sagging in off of some of our players, and we talked about how we could use that to our advantage. Defensively, I challenged our players to be a bit tougher, and then we also started mixing in a bit of zone in the second half to keep Bowling Green from gaining a rhythm. I thought we did a tremendous job in that zone through the end of the 4th quarter and into overtime.”

“Our team did a great job making their free throws today - I'm really pleased with that. I thought that all of our guards did a great job continuing to drive the ball throughout a physical game. They continued to go and go, and when they had opportunities to go to the free throw line and make foul shots, they did.”

Valpo (2-3) heads right back on the road Wednesday evening as it faces its second consecutive MAC foe, playing at Toledo. The 6 p.m. CT tip can be seen live on ESPN+.