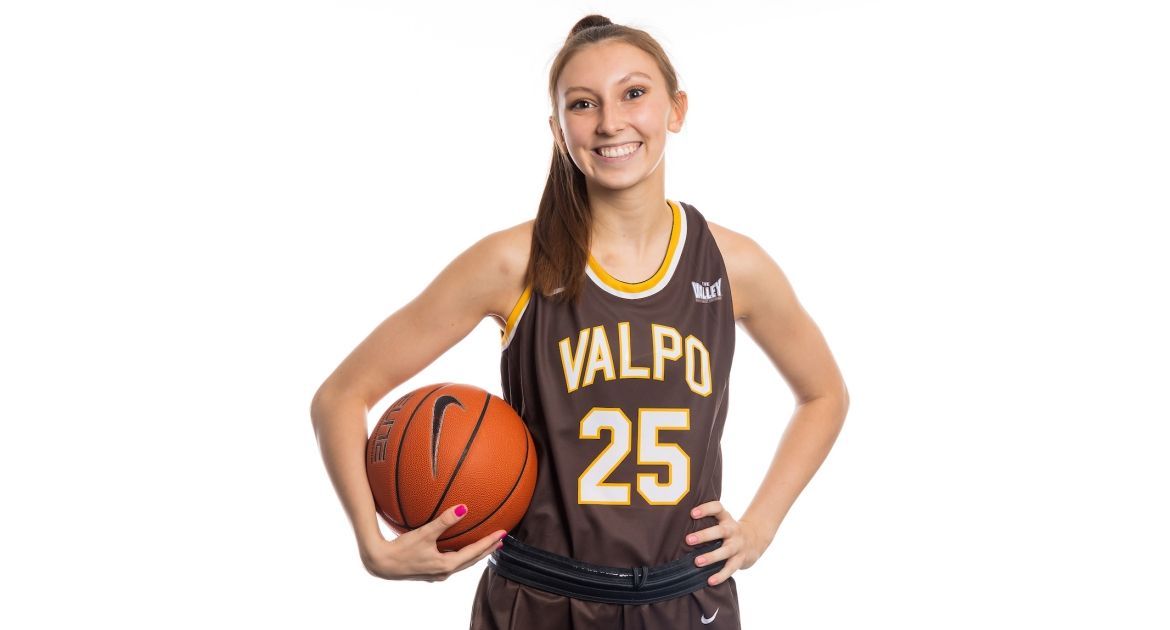 Next Up in Valpo Basketball: The Valpo women’s basketball team looks to bounce back from a Thursday loss and earn a split of the conference weekend on the road on Saturday afternoon when it plays at Bradley.

Head Coach Mary Evans: Mary Evans is in her fourth year at the helm of the program in 2021-22 and owns a record of 41-61. Evans has made an immediate impact on the program in her first three years, raising the team’s level of play to be competitive in a strong Missouri Valley Conference. Evans’ preferred style of play has been a big part of the program’s turnaround, as Valpo has led the MVC in 3-pointers made per game and in steals per game in each of the last two seasons.

Series Notes: The Braves lead the all-time series over Valpo, 12-3, and are 6-2 in eight matchups since Valpo joined the MVC prior to the 2017-18 season. Last season, the two squads split a two-game series played at the ARC. The opener on Feb. 4 saw Valpo match a program record with 17 made 3-pointers and overcome three separate double-digit deficits in a 71-66 victory. The next night, the Braves turned the tables, picking up a 61-51 win. Valpo is in search of its first-ever road win at Bradley, as the Braves have won all six matchups they have hosted in the series.

...at Illinois State
- A back-and-forth first quarter ended with Illinois State on top by one point, 14-13.
- The Beacons scored the first four points of the second quarter to lead 17-14 with 8:18 to play in the first half, but would be held scoreless for the next five-plus minutes as Illinois State went on a 13-0 run.
- Frederick snapped the scoreless drought with a 3-pointer with 2:56 to go in the half, a basket which proved to be the lone points for Valpo in the final 8:18 of the half. Illinois State went into the locker room with a 31-20 lead at intermission.
- The Beacons got no closer than the halftime deficit in the second half, as the Redbirds scored the first six points of the second half and led 55-32 at the end of the third period.
- Grace White’s 16 points off the bench paced Valpo on Thursday, while she also tied for team-high honors with seven rebounds.
- Shay Frederick scored 15 points, knocking down three 3-pointers, and matched White with seven boards.
- Valpo committed a season-high 26 turnovers on the offensive end. In addition, the Beacons hit just 32.6% from the floor — their second-worst percentage of the year — and went just 7-of-25 from 3-point range.
- Valpo won the rebounding battle for the second time this season, owning a 38-26 advantage on the glass. The +12 margin on the boards was the program’s highest edge in the rebounding department since a +12 in a win at Loyola on Feb. 11, 2018.
- The Beacons were 14-of-15 from the foul line, their second-best effort of the year at the charity stripe.
- Illinois State, which improved to 4-0 in MVC play this year, hit 10-of-25 from the 3-point line — a season high for 3-pointers allowed by Valpo, which entered the game allowing opponents to hit just 18.8% from deep in conference action.

...versus Drake
- Valpo never trailed, as two early 3-pointers from Caitlin Morrison got the Beacons out to an 8-0 lead.
- Drake rallied to tie the game at 12-all, but Valpo scored the final eight points of the first quarter to lead 20-12 at the end of one.
- Matching mini-spurts opened the second quarter, as Drake scored the first five points of the period before Valpo came back with six in a row to extend its lead to nine points.
- The Beacons’ lead reached double digits for the first time late in the first half on a 3-pointer by White, and got up to as many as 12 points before settling in at a 38-29 advantage at intermission.
- Valpo’s lead never fell below nine points in the second half, and reached as many as 18 points as the Beacons earned their first win in program history over the Bulldogs.
- Morrison ended the game 7-for-9 from beyond the 3-point line to match her career high with 21 points.
- Frederick broke her career high, dishing out 10 assists - the first Valpo player to register double-figure assists in a game since 2017.
- Frederick’s distribution was more than enough for the Beacons’ offense on Sunday, as four Valpo players finished in double digits in the scoring column for the first time since Dec. 20, 2020 at Wisconsin — led by the effort of Morrison.

...looking ahead
- Valpo returns home to the ARC next weekend to take on Indiana State on Friday night and Evansville on Sunday afternoon.

@BradleyWBB
- Bradley enters Saturday’s game at 3-10 overall and is 0-4 in MVC play after falling to Loyola on Thursday, 48-41.
- The Braves lost star Gabi Haack, a multiple-time First Team All-MVC honoree, to a season-ending injury on Jan. 1.
- Caroline Waite - Bradley’s next-leading scorer at 13.5 ppg - missed the Loyola game as well, as Tatum Koenig (8.3 ppg) was the Braves’ leading scorer who took the court against the Ramblers.

Last Weekend’s Firsts
- Valpo’s win over Drake on Sunday was the first in program history over the Bulldogs.
- Drake previously owned a 13-0 advantage in the series, 11 of which had come since Valpo joined the Valley.
- That leaves Missouri State as the lone program the Beacons have yet to beat since joining the MVC.
- The win over Drake also gave Valpo its first sweep of the UNI/Drake weekend in MVC play.
- It is Valpo’s fourth sweep of a weekend set since joining the Valley. Valpo previously swept both the home and road Indiana State/Evansville weekends in 2019-20, and took down Southern Illinois twice on back-to-back days last season.

Frederick Moves On Up
- One season after leading the Valley in assists, Shay Frederick again tops the chart this season, and she enjoyed the best game of her career distributing the basketball on Sunday.
- Frederick handed out 10 assists in the victory over Drake to set a new career high in the category, the first time a Valpo player has been in double figures in assists since 2017 and just the third-such effort by an MVC player this season.
- After tallying three assists last time out at Illinois State, Frederick now has 420 career assists and is just four shy of Mo Drabicki for third place in program history in the category.
- One of 17 players in program history to reach the 1,000-point milestone for her career, Frederick surpassed Lynda Kukla for 14th all-time at Valpo in scoring last time out, as with 15 points at Illinois State, she now has 1,095 career points - just one away from Tamra Braun in 13th position.
- Frederick is one of just two players in program history with at least 1,000 career points and 400 career assists, and just one of three active MVC players above those marks (Brice Calip, MSU-1500/435; Karli Rucker, UNI-1618/453).
- Frederick also moved alone into sixth place in program history with 174 career 3-pointers at Illinois State, nine shy of the top-five.

Liv Breaks Out
- Junior Olivia Brown has stood out for the Beacons since the start of MVC play.
- In Valpo’s first five MVC games, Brown is averaging 12.8 ppg on 56.8% shooting from the field and 54.5% from 3-point range.
- This comes after Brown averaged just 2.5 ppg through non-conference action and hit a total of nine field goals in the first 11 games.
- Included among her efforts in conference play so far are three double-digit scoring performances, and she has led all players twice - with 21 points at Missouri State and with 18 points in the win over UNI.
- Brown was named MVC Newcomer of the Week on Monday for her performances in the victories over UNI and Drake - Valpo’s first MVC Newcomer of the Week since March 9, 2020.

Bookending the Weekend
- Sixth-year forward Caitlin Morrison enjoyed both a stellar start and finish to Valpo’s weekend sweep last weekend.
- When she stepped into the center circle for the opening tip against UNI on Friday, Morrison broke Valpo career records for both games played and game started - marks which now sit at 128 and 124, respectively, following the Illinois State game.
- Then, on Sunday against Drake, Morrison hit a triple with under two minutes to play to cap a 7-for-9 shooting performance from 3-point range to match her career best with 21 points.
- The seven triples are tied for fifth-most in a single game in program history, with Frederick last season at Wisconsin the only other Valpo player in the last decade to connect on seven or more 3-pointers in a contest.
- Morrison’s .778 clip from deep on Sunday is tied for fourth-best in a single game in program history.

Top 100 Wins
- Valpo has made a habit of knocking off top-100 opponents in MVC play over the last few seasons and did so twice last weekend.
- Friday’s win came over a UNI team which entered the night ranked #46 in NET, and Sunday’s victory came over a Drake squad which was #65.
- It marks Valpo’s sixth and seventh top-100 NET/RPI wins in Valley action over the last three seasons.
- Prior to its Feb. 16, 2020 win at Illinois State - its first top-100 win in conference play since joining the Valley - Valpo had gone nearly seven years without a top-100 victory.

What a Rally
- The win over UNI marked the 11th time in the four-year tenure of head coach Mary Evans that Valpo has rallied from down double digits to win.
- The 13-point comeback in the fourth quarter ties the program’s largest comeback in the final period since the move to quarters — Valpo previously rallied from a 13-point deficit in the fourth quarter in a 66-64 win over Loyola on Jan. 24, 2020. Ironically, the two-point final margin in that win was also secured by a 3-point play from Frederick.
- The last time Valpo rallied from a larger deficit within the game’s final 10 minutes came at Loyola on Feb. 17, 2011. Valpo trailed that day by 14 points with 8:45 to play and went on to a 72-68 victory.