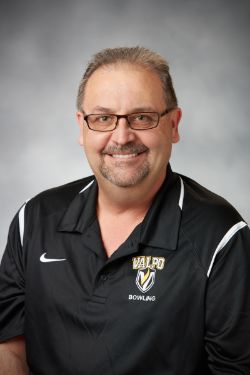 Matt Nantais enters his fifth season as head coach of the Valparaiso bowling program in 2015-16.

Nantais has led Valparaiso to 253 victories in his first four years at the helm.  That total includes a program-record 84 wins in his first season (2011-12), a season where the Crusaders ascended as high as #1 in the NTCA coaches poll and advanced to the 2012 NCAA Women's Bowling Championship, where the team finished in the final six.

Nantais guided the Crusaders to 60 victories in 2012-13 and 59 wins in 2013-14, while last season saw the Crusaders earn 50 wins. Each of the last two seasons, Nantais has lined up a schedule for Valpo which ranks among the nation's toughest - slates which featured opponents among the top-ten in the nation for nearly half the team's matches.  The Crusaders ended the 2014-15 campaign ranked 16th nationally, continuing the program's streak of being ranked in every single NTCA coaches poll since the program's inception.

Over his four seasons, Nantais has seen nine bowlers earn All-Tournament Team honors, including Natalie Cortese at the NCAA Championship in 2012.  He also coached Cortese as she earned NTCA Honorable Mention All-American status following her senior season, while Torrie Decker became the second bowler in program history to be named an Honorable Mention All-American for her work during the 2014-15 campaign.

Nantais came to Valparaiso after spending a season as an assistant coach for the women’s squad at Robert Morris [Ill.] University.  While there, Nantais helped guide the Lady Eagles as they reached the top spot in the nation in the United States Bowling Congress (USBC) Intercollegiate Team national poll.  Robert Morris went on to close the season with a fifth-place finish at the National USBC Team Championships, as well as a third-place showing at the NAIA Team Championships.

Prior to joining the Robert Morris coaching staff, Nantais spent the 2009-2010 season as assistant coach for the Lake Central H.S. girl’s team, which placed fifth in the state.  During his year at Lake Central, he helped tutor current Crusader Kaity Galka.  Nantais also previously spent two seasons (2006-2008) as head coach of the boy’s team at North Newton H.S., and has served as a coach in the Stardust III (Dyer, Ind.) Junior Program since 1987.  He received his USBC Bronze Certification in June of 2008 and followed up by earning his Silver Certification in October of 2008.