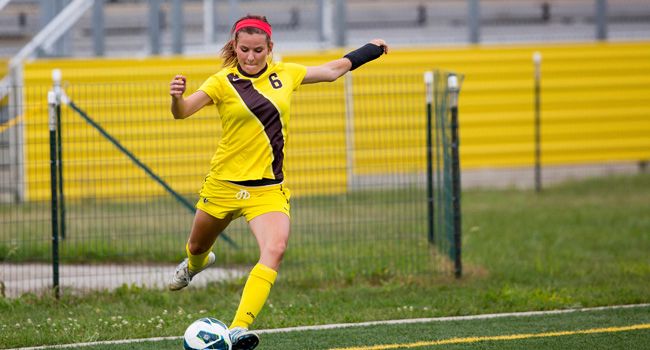 Winning late-night games at Brown Field is starting to become a habit for the Valparaiso women's soccer team, as the Crusaders took down Cleveland State in Horizon League action Saturday evening, 2-1, on the first collegiate goal from freshman Morgan Manzke (Orland Park, Ill./Sandburg) off a well-executed team move in the 88th minute.

For the second time this year, the Valpo women were forced to endure a lengthy pre-game delay due to inclement weather, and improved to 2-0-0 in those games this year. Saturday night's game was slated for a 7:30 p.m. kickoff, but the teams finally started play around 9:45 p.m.

Valparaiso showed no signs of fatigue from the long pre-game delay, cracking the scoreboard in just the seventh minute of action. Senior Hailey Chmela (Hawthorn Woods, Ill./Lake Zurich) turned to get herself free for a cross from the right flank and put it into the box along the ground. Sophomore Jenny Fassbinder (Hudson, Wis./Hudson) motored into the center of the box from her left forward position and met the ball in the middle of the box, six yards away from goal. Fassbinder took a first-time strike and beat CSU goalkeeper Sarah Wood to the right side of goal, giving the Crusaders a 1-0 lead.

The Crusaders had numerous other early chances, tallying 13 total shot attempts in the first 45 minutes. The Crusaders forced Wood to make three saves to keep Valpo at just one goal, while a CSU defender also cleared a second-chance attempt from Chmela off the goal line in the 21st minute.

"I thought our energy level was really good at the beginning of the match and thought we had some really good possession," said Crusader head coach John Marovich. "We had several really quality chances early on, and Hailey did a great job winning the endline and putting in good crosses - a product of our intentful practice this week - and that helped lead to our first goal. Our execution of what we wanted to do was really good for the first 30 minutes or so. We fell off a touch after that, but in general, executed well tonight."

Valpo goalkeeper Kristen Manski (St. Charles, Ill./North) kept the Vikings off the board with a leaping one-hand push over the bar on an long-range attempt by Allie Sieradzki in the 37th minute. But Cleveland State got the equalizer less than four minutes from halftime, as Brittney Koester took possession of a missed Valpo clearance and got the ball to Vickie Havas on the left-hand side of the 18-yard box, where she turned and shot into the upper-right corner to ensure the game would be tied at the half.

The second half started out much differently than the first half, as the period got to the halfway mark with just one combined shot attempt from the two sides. Both teams would eventually tally seven shots in the second half, the Vikings placing five of theirs on frame. But most of those were long-distance strikes, easily handled by Manski to keep Cleveland State on one goal.

It looked like the game was destined for extra time before Valpo put together the pretty sequence which culminated in the match-winner in the 88th minute. The Crusaders gained possession in the midfield, where redshirt freshman Shelby Oelschlager (Glendale, Ariz./Mountain Ridge) won a header to start a run down the left side. Sophomore Jordyn Ryfiak (Rockford, Mich./Rockford) took the header and slipped a pass ahead to Oelschlager, who continued the run down the left flank. As she reached the top corner of the box, Oelschlager slotted the ball across into the middle for Manzke, whose strike rippled the net inside the far post to ensure Valpo the three points.

"We scored two quality goals tonight - both of which I thought had fantastic finishes," said Marovich. "Our second goal was about our team's fitness level really coming to the forefront. Jordan took a nice touch, and Shelby made a great 30-yard run with pace after playing 87 minutes to take on the defender. She slipped a nice ball to Morgan, who sprinted a long way as well to finish the play. It's all about heart and fitness late in games, and when we work on fitness during the week and its hard, this is why we do these things - because it makes a difference in close matches."

Valpo ended the night with a 20-14 advantage in shots over Cleveland State (7-5-1, 1-1-0 Horizon) and put nine on goal to the Vikings' seven. Manski stopped six shots in the winning effort, while Wood also made six saves for CSU. The Crusaders earned ten of the 12 corner kicks on the evening as well.

"i've just been really pleased that our team has reponded well to the things we've asked them to work on," said Marovich. "At the end of the day, I'm enjoying working with them because they're really putting in that time. Now we have to get back to work tomorrow with a tough week ahead, at Oakland and at home against Wright State."

Valparaiso (7-4-1, 1-1-0 Horizon) plays a midweek Horizon League game Wednesday evening at Oakland, taking on the league newcomers at 6 p.m. CT. Links for live stats and live video through the Horizon League Network will be available at ValpoAthletics.com.