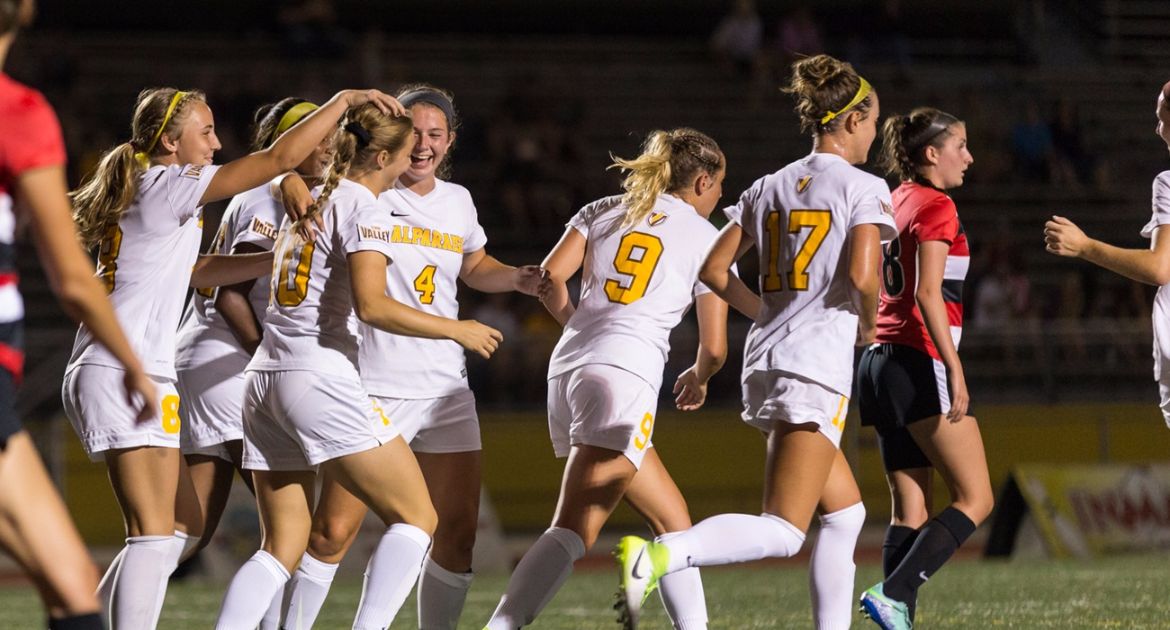 The Crusaders celebrate with Lauren Torhorst after the freshman scored her first career goal.
Grace at Valparaiso | August 18, 2017

The Valparaiso University women’s soccer team got the 2017 campaign off to a strong start on Friday evening from Brown Field, as a goal in the 57th minute from senior Jordon Tindell (Jacksonville, Fla./Bishop Kenny) sparked three tallies in a 10-minute span as the Crusaders took down Grace College by a 3-0 final.

After peppering the Grace defense with 22 shots without finding the back of the net in the first half, the Crusaders finally broke through just over 11 minutes into the second half on a strike from Tindell. A few minutes later, freshman Lauren Torhorst (Waterford, Wis./Waterford Union) and junior Sydney Griffin (Hinsdale, Ill./Hinsdale Central [New Hampshire] each tallied their first goal as a Crusader in a span of just 2:17.

- Valpo was unable to break through in the opening 45 minutes for the game’s first goal, despite racking up 22 shot attempts. Grace goalkeeper Abby Schue made nine saves to keep the game scoreless at halftime, while Griffin had a chance ricochet off the crossbar in the 10th minute.

- It would take until Valpo’s 26th shot attempt for the opening goal to come in the 57th minute. Griffin took a shot in tight which was blocked by a defender, but the rebound came to the foot of Tindell in the center of the box. The senior calmly knocked it inside the right post to give the Crusaders the 1-0 lead.

- It was a dream debut for Torhorst, who came in as a substitute in the 63rd minute. Immediately involved in a corner kick, the freshman had a header blocked by the Grace defense. But on that ensuing corner, Torhorst got free from her marker and this time knocked home the header in the 64th minute to double the Crusaders’ advantage.

- Valpo ran a counter to perfection in the 66th minute to close out the night’s scoring. Junior Kelsey Jahn (Oregon, Wis./Oregon) gained possession in space and ran down the left side, approaching the end line before laying a perfect pass back across the box to an unmarked Griffin, who finished with ease for the final margin.

- The three Crusader goal scorers had combined for just one goal in a Valpo uniform before Friday night. Tindell’s goal was the second of her career and her first since Sept. 30, 2015, while Torhorst scored in her collegiate debut and Griffin found the back of the net in her first game at Valpo after two seasons at New Hampshire.

- Griffin’s assist on Tindell’s match-winning goal was her first career helper. Junior Natalia Kontul (Solon, Ohio/Solon) delivered the corner kick on Torhorst’s header for her second career assist, while Jahn’s assist was also the second of her Crusader career.

- Valpo kept the pressure on the Grace defense throughout the evening, ending the night with 36 shot attempts – fourth-most in program history and the most in a single match since 2006. Griffin recorded 10 shot attempts on her own, just one shy of Valpo’s single-match record by an individual and the most by a Crusader player since 2000, while Tindell tallied seven shots as well.

- The Crusaders enjoyed advantages of 36-4 in shot attempts, 18-2 in shots on goal, and 7-3 in corner kicks. Junior Drew Moulton (Sycamore, Ill./Sycamore) made a pair of saves in goal to earn her second career clean sheet, while Schue ended the night with 15 saves for Grace (0-1-0).

- The victory was Valpo’s first in a season opener since 2013, when the Crusaders took down DePaul at Brown Field, and means it has the chance to start 2-0-0 for just the third time in program history on Sunday.

"I thought we did a good job keeping pressure on Grace in the first half. We forced a lot of turnovers and were connecting well in the midfield, which created a lot of chances for us in the attacking third. The final pass into the net just wasn't quite there in the first half - I felt like we were a bit rushed in our decision making, which could be attributed to first game nerves."

"We used our width a lot better in the second half. We were able to get to the end line and get the ball across to create chances, one of which Jordon finished. Lauren came in and delivered an outstanding goal, knowing what we wanted to do on the corner and staying disciplined. Then we cap it off with a great counter - Kelsey gets on the ball and gets down the field, and Syd trails at the right angle and with the right pace to allow Kelsey to lay off a perfect ball for her."

"Kelsey stood out tonight with her leadership and performance in the middle of the field, whether it was tracking back to defend or being aggressive in the attack. I felt like Adi (Johnson) and Syd Gountounas really had good performances as well - they really had an edge to their play."

"We're happy to get a win - we have a lot to learn, and a lot of things we can pull out from tonight's performance, but it's always nice to be able to learn and get a victory at the same time."

Valpo (1-0-0) hosts IUPUI (0-1-0) on Sunday afternoon at Brown Field. Kickoff is set for 1 p.m., with live stats available via ValpoAthletics.com.