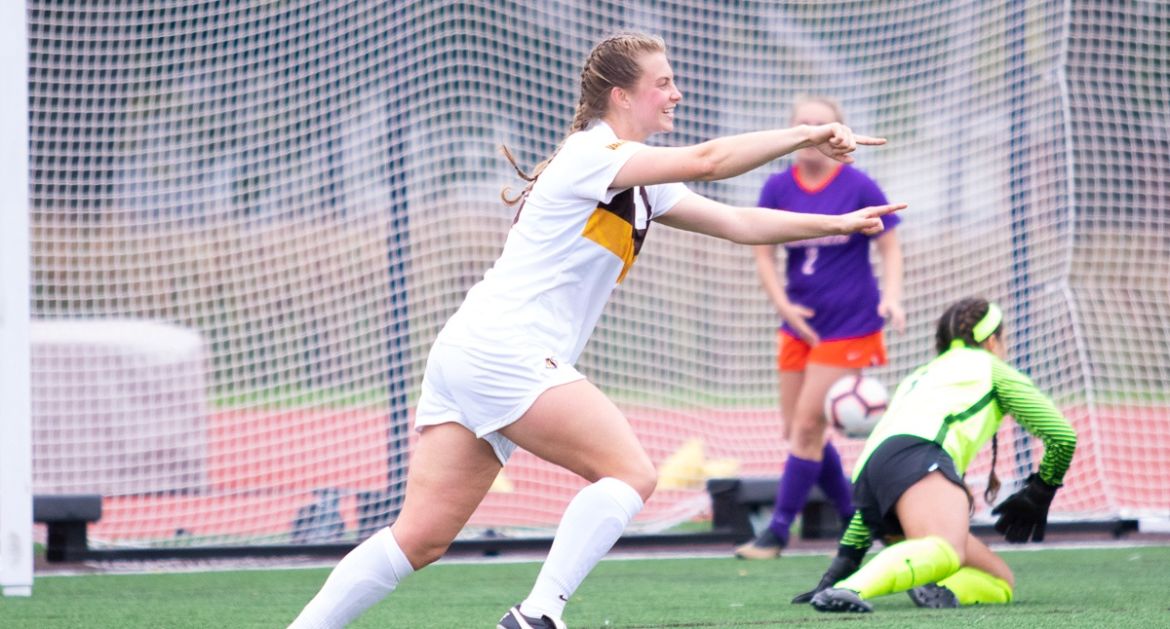 Lauren Torhorst celebrates after her goal on Sunday.
Evansville at Valparaiso | October 20, 2019

Junior Lauren Torhorst (Waterford, Wis./Waterford Union) gave the Valpo women’s soccer team the lead Sunday afternoon against Evansville with a goal midway through the first half, and a strong team-wide effort kept the Purple Aces at bay the rest of the way, as Valpo came away from Brown Field with a 1-0 victory and a key three points in MVC play.

“I’m super proud of this group today – not because of the result, but because they stayed the course and handled today the same as every other match. Our development has been great, and with our conference matches coming into today, we have been right there. We’ve gotten to the finish line against the conference’s top teams, and I think those battles paid off today.”

“In and around the attacking third, we were much better today and created a lot more service into the box. The overall combination which got us our goal was some very good soccer – six different players were in on the move, and it was exciting to see that development and growth come to fruition with that goal.”

“The game always asks for someone to step up in the critical moments, and that’s what LT did for us today with her goal. I also was especially happy with Lauren Yoder’s shift off the bench in the final 20-plus minutes of the first half.”

“It was a great overall performance today, and three points well earned. Now, we have to handle this the same way we’ve handled our other results this year. It’s about our development and growth, and taking measures to make sure we take another step forward next time out with a tough road match at Drake.”

Valpo (1-13-1, 1-4-0 MVC) faces its final regular-season road test of the year next Saturday at Drake. Game time will be 4 p.m., and the match will be contested at Urbandale H.S. in Urbandale, Iowa.